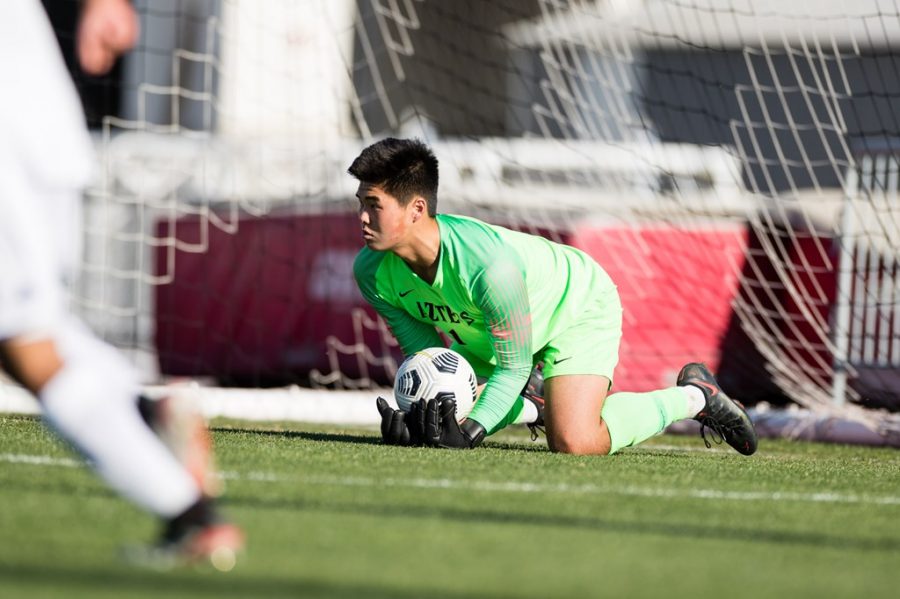 San Diego State men's soccer sophomore goalkeeper Tetsuya Kadono makes a save during the Aztecs' 2-0 upset over No. 4 Washington on March 28, 2021 at the SDSU Sports Deck.

The San Diego State men’s soccer team lost its last away game of the season against California 3-1 on Saturday, April 10 in Berkeley, Calif.

The Aztecs (1-6-2) returned to the Bay Area this past weekend in hopes to add points to their Pac-12 Conference standings. The Aztecs, however, didn’t come back with a positive result, as the Golden Bears (4-4-1) were also in pursuit of holding their position in the conference.

The beginning of the game showed signs of a potential win for the Aztecs as they scored in the first five minutes of the game, but the Bears would score 20 minutes later in the first half and add two more goals in the second frame.

The early goal for the Scarlet and Black came courtesy of junior midfielder Tristan Weber, who shot a cannon from 35 yards out with his left foot to put the ball in the upper right corner of the Bears’ goal to make it 1-0.

The Cal Bears responded within the 26th minute, when freshmen midfielder Evan Davila found space to dribble through the middle of the Aztecs’ midfield and knuckled a shot from 25 yards out with his right foot into the lower right corner past the SDSU starting goalkeeper, sophomore Tetsuya Kadono.

Kadono would get tested early in the second half from the 12-step penalty kick mark for the sixth time this season. Cal junior forward Jonathan Estrada would get the chance to shoot from the penalty spot in the 48th minute and managed to convert it with a right-footed shot to the lower left corner of Kadono which put the Bears up 2-1.

Kadono is 5-1 in penalty kick saves this season.

The Bears would score once more in the 56th minute with a finesse shot from 22 yards out by junior defender JJ Foe Nuphaus to extend Cal’s lead to 3-1.

SDSU wasn’t able to respond to Cal’s goals in regulation, giving the team its sixth loss of the season and placing it in last in the Pac-12 Conference standings.

The Bears outshot the Aztecs 19-7 but the Aztecs had more chances from corner kicks with a 7-5 advantage. Kadono finished with seven saves, making it the third game in the last four matches collecting at least seven saves.

The Aztecs’ fouling resiliency was also prevalent this game, as they fouled the Bears 10-7.

The Scarlet and Black return to the SDSU Sports Deck on Saturday, April 17 to wrap the regular season against Oregon State.