Aztecs’ senior to use NCAA waiver at Oregon State 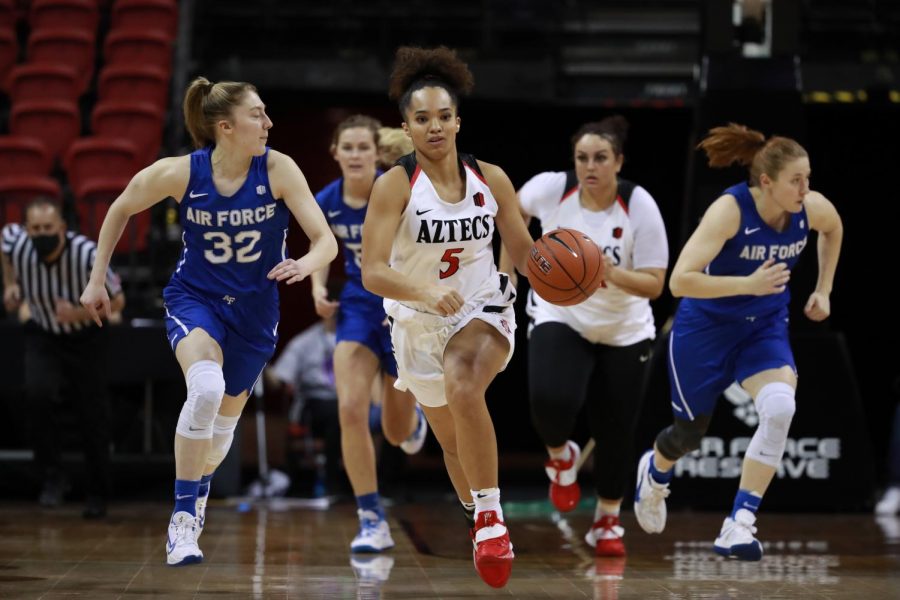 San Diego State women's basketball senior guard Téa Adams pushes the ball up the court during the Aztecs' 56-48 loss to Air Force on March 7, 2021 at the Thomas & Mack Center in Las Vegas.

However, it will not be for the Scarlet and Black.

The Kirkland, Wash. native will play closer to home in Corvallis, Ore. next season for the Oregon State Beavers as a grad transfer, according to a news release from the Beavers’ women’s basketball program.

The 3.4 assists ranked ninth in the Mountain West Conference.

Her season-high in points this past season was achieved twice when she put up 24 points at Colorado State on Dec. 10 and at Nevada on Jan. 7.

Adams averaged almost 10 points per game throughout her career at SDSU, in which she started in 81 of 82 games.

The 5-foot-9 guard also accumulated 809 points during her Aztec career.

Adams said she will always be able to reminisce from her time on Montezuma Mesa.

“I’ve made memories here with such amazing people that I will hold in my heart forever, and that have changed me for the better,” Adams said. “The people here have stood by me for better or for worse so I’m forever grateful and indebted to this program.”

The Aztecs and Beavers have had transfers to and from each school in the past, with Taylor Kalmer going from OSU to SDSU for the 2019-20 season, also as a grad transfer.

The 5-foot-9 guard will join an Oregon State team that made the Round of 32 in the NCAA Tournament last month in San Antonio.

In addition, Adams will be part of a program that will face Arizona and Stanford – the two teams that faced off for the National Championship earlier this month – in Pac-12 play.