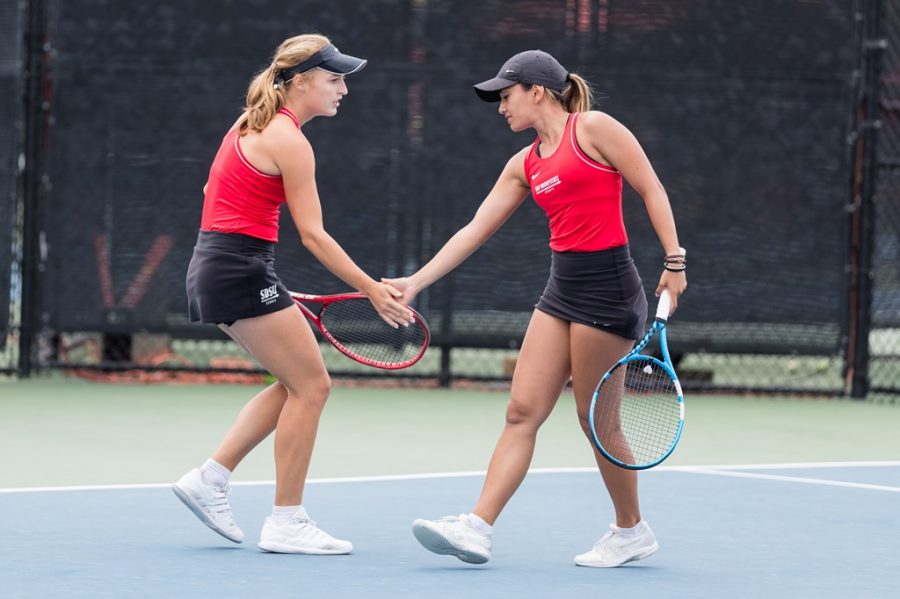 The San Diego State women’s tennis team had fallen into a bit of a rut in recent weeks. The team had lost four of its last five matches, including both road games in Boise last week.

It turns out the cure to the Aztecs’ ailments was a return home.

Despite the short skid, head coach Peter Mattera knew that other factors were at play during those games.

“We had three people who had just recently come off a three-week mandated COVID break,” Mattera said. “Yes, we were on a bit of a losing streak, but it wasn’t exactly tennis-related but more of the other stuff.”

In its first game of the weekend, SDSU truly looked back to full strength for the first time all season.

In the first of two weekend games, the Aztecs brought out the brooms in a 4-0 sweep of the Lobos.

Two quick wins in doubles signaled that the Aztecs were fresh and ready to win.

Senior Tamara Arnold and junior Alicia Melosch made quick work of senior Natasha Munday and freshman Hsuan Hung on the first court, taking a 6-1 victory to start the day.

Shortly after, junior Regina Pitts and freshman Cecile Morin clinched the point for the Aztecs with a 6-3 victory over senior Yue Lin Chen and junior Myu Kageyama.

Singles was much of the same as the Scarlet and Black continued to dominate the field.

The first victory came on the first court as Arnold earned her third consecutive singles victory in the No. 1 spot with a 6-1, 6-2 win over Lin Chen.

Triumphing on court two was Pitts with a 6-3, 6-1 win over Kageyama while senior Abbie Mulbarger clinched the dual-set victory by defeating freshman Satoho Toriumi 6-1, 6-2.

The Scarlet and Black paid another visit to the broom closet, sweeping the Falcons to the tune of a 4-0 victory. With the win, SDSU is now 14-0 all-time against Air Force.

With it being Senior Day, the Aztecs brought the energy but Air Force brought it right back with their own tempo.

Despite this, Melosch said that the Aztecs were still able to handle Air Force.

“They have some different tactics which is kind of difficult to adapt,” Melosch said. “I feel like we as a team support each other pretty good… I think this helped us out a lot against Air Force.”

Just like the previous affair, the Aztecs drew first blood on doubles as Pitts and Morin took a swift 6-2 victory over junior Alex Kuo and sophomore Ksenia Vasilyev.

However, the Falcons flipped the script on the Aztecs, when the sophomore duo of Shailla Alda and Sydney Fitch beat Mulbarger and senior Nnena Nadozie 6-4 on the third court.

Just like that, the doubles set was tied. The point would be decided on the third court, where neither Melosch and Arnold or Air Force senior Meredith Jones and freshman Isabella Flodin refused to give an inch.

In the end, it was the Aztecs who clipped the Falcons’ wings as Melosch and Arnold earned a thrilling 7-6 (10-8) win.

With all doubles matches concluded, both squads moved on to singles where the Aztecs continued to dominate.

Serving as the clutch was Melosch, who locked down another sweep with a 6-2, 7-5 win over sophomore Mebellis Becerra.