An offseason day in the life of Brian Dutcher 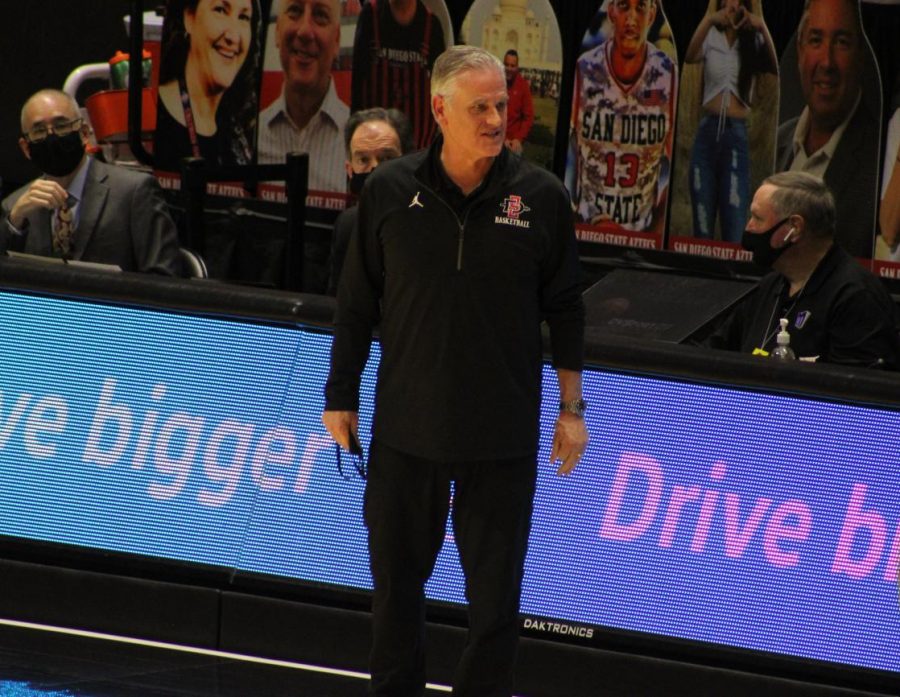 San Diego State men’s basketball headed to the Indianapolis International Airport Saturday morning following its 78-62 loss to Syracuse in the First Round of the NCAA Tournament on March 20.

The season was over from the moment the team stepped off the basketball court at Hinkle Fieldhouse. But for head coach Brian Dutcher, the end of the season marks the start of go-time. It’s the start of when another type of “March Madness” begins as he starts to think about what his team will look like for the 2021-22 season.

“Right now to be honest with you, I’ve got my GM hat on,” head coach Brian Dutcher said on XTRA 1360. “I’m watching (film) 24 hours a day (of) transfers around the market and trying to piece together next year’s team. Obviously, I’m disappointed on the way this year ended. Even though it was a great season, we hung two banners, I’m working toward next year already.”

Looking ahead to next season, Dutcher will have to replace his two four-year seniors, forward Matt Mitchell and guard Jordan Schakel, who brought depth and leadership to his team. Both have announced that they are pursuing a professional career by declaring for the 2021 NBA Draft.

The off-season is the time where Dutcher begins to piece together a roster for next season.  He begins to search for players who fit as pieces that work with the Aztecs’ culture, and are willing to sacrifice part of their game in order to win.

“We’ve always been able to play with great versatility, so we like players that can do multiple things,” Dutcher said in a press conference. “We’re looking for length, athleticism, skill sets and instincts and good people. We’re trying to put a formula together where we’re researching all these kids that are available right now and find the best fits for our program.”

So, who does Dutcher have returning as pieces he can work with at this point in time?

It’s official that Schakel and Mitchell are leaving. Additionally, guard Terrell Gomez announced he will not be returning and looks to continue his career professionally overseas.

That leaves junior forward Aguek Arop, junior forward Nathan Mensah, junior guard Adam Seiko and sophomore forward Keshad Johnson who will step into roles as the upperclassmen of the team. He also has freshman guards Lamont Butler and Keith Dinwiddie Jr. who will look to step into a bigger role after having one year of experience under their belts.

Dutcher’s job is to have sit-down exit interviews with every player on his team to evaluate their performance this season, discuss areas they did well in and deliberate areas they could improve upon. This is the time whenre Dutcher could ask his seniors about any thoughts of returning for an extra year.

After the NCAA Tournament ended, Dutcher said he felt there was a possibility that Pulliam and Tomaić could return.

“I anticipate that we will have one or two players back,” Dutcher said. “We haven’t finished exit interviews completely and it’s still an ongoing process, but I wouldn’t be surprised if we had one or two players return for another season.”

As he continues to meet with members of his own team, he’s also looking to other teams to fill the missing pieces from the departures of Schakel, Mitchell and Gomez.

Dutcher found one of his pieces on Monday evening when California transfer Matt Bradley announced his commitment to the Aztecs via Twitter. Bradley is immediately eligible to play with up to two years of eligibility remaining.

Dutcher has always been a coach who likes his team to be “older.” He has a history of finding success by utilizing the transfer portal which fills up with thousands of student-athletes who are wanting a new opportunity, change of scenery or a better chance to make a run in the NCAA Tournament. The Aztecs have made eight tournament appearances in the last 11 years which makes SDSU an appealing school to many.

The transfer portal is where Dutcher found Malachi Flynn, KJ Feagin and Yanni Wetzell who were all key pieces to last year’s 30-2 team. The portal brought this year’s additions of Gomez and Tomaić.

These players came from schools across the nation, from Washington State (Flynn) to Vanderbilt (Wetzell), requiring Dutcher to do his research in all areas of the transfer portal and not just one region of the country.

“We research the entire country,” Dutcher said. “Obviously, Yanni Wetzell from Vanderbilt, Josh Tomaić from Maryland, so we’ll reach anywhere in the country we feel there’s a player good enough to help our program and represent us in the right way.”

Taking the time to research the wide variety of thousands of players in the transfer portal is tedious, but it’s an essential part of Dutcher’s job as he builds a championship-contending team.

“It’s just time consuming,” Dutcher said. “It’s watching a thousand kids in the portal trying to watch highlights and film on all of them, and try to pick the right ones. That’s players leaving high major programs or players leaving programs that you would consider low major. There are good players all over this country and we have to do the research to find the right ones that will continue to keep us on top of the Mountain West and in the national rankings.”

Dutcher hasn’t even watched film of the Aztecs’ loss to Syracuse yet as he is dedicating all of his time to watching film of players that could be potential Aztecs.

Additionally, Dutcher hasn’t been able to conduct any form of in-person recruiting in 15 months due to a recruiting dead period by the NCAA. A in-person recruitment trip allows potential players to feel out the environnement at SDSU. It also allows Dutcher to see more of that player’s skills , and determine how they’d fit into the Aztecs’ lineup.

On April 15, the NCAA announced that all Division I sports can return to their regular recruiting calendars beginning June 1.

Not only is Dutcher recruiting new players, he’s also recruiting his own players to ensure they feel that they still have a place here at San Diego State. As news will soon begin to break of players announcing they’re transferring to SDSU, Dutcher wants to make sure that every player knows their role in the mix.

“We may add a piece and someone may question their role, so we have to do a good job of explaining the importance of each individual in our program,” Dutcher said. “(We explain) that they were brought here because they’re good players, they’re good people and they’re good students, so we will continue to try to keep the players in this program as Aztecs and I think right now we have a good chance of doing that.”

For now, this is the typical day of a college basketball head coach in the offseason: conduct exit interviews with current players, watch film of players in the transfer portal, contact other coaches to discuss their thoughts of certain players and meet with their own staff of coaches.

There’s no time for Dutcher to enjoy the sunny, 80-degree weather in San Diego when the transfer portal is calling his name. All of his time and effort is going to good use if he can build a roster that he feels is strong enough to continue to bring championships to San Diego.

“We will get it built again and we will be back in contention,” Dutcher said on XTRA 1360. “Our goal is to make a run to the Final Four and we’re going to do whatever we have to do to make that happen someday.”