Conference championship, fundamentals a focus for Greg Bell in 2021 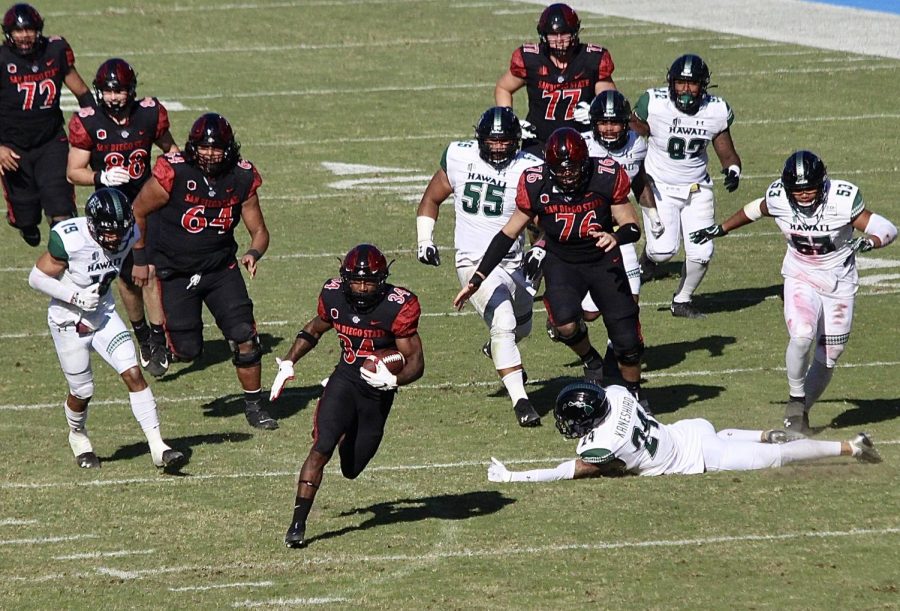 When observing spring ball before the 2020 San Diego State football season, onlookers saw a swarm of running backs fighting for a starting job.

One man was held back. A freak eye injury cost him his 2019 season and valuable practice time during camp.

Did that stop senior running back Greg Bell? No. No, it did not.

Bell proceeded to rush for 637 yards on 113 carries (5.6 yards per rush) while finding the back of the endzone six times during the 2020 season.

He could’ve left after his senior season to the greener pastures of the NFL. Instead, Bell is back with his eyes on the greatest prize of them all: bringing a championship to The Mesa.

“I just think it’d be big to do it from my hometown,” Bell said. “A lot of people know me out here, and I think it’d be huge to do it out here for this school in San Diego.

So far, Bell has made up for the time he lost last season. While he is already an exceptional runner, the senior has been focusing on parts of his game that need improvement.

During a scrimmage last week, Bell made two catches on 3rd and long situations to secure first downs.

During a media presser, Hecklinski revealed that Bell had been spending extra time working on his pass-catching ability.

Another aspect Bell has been working on during camp: blocking, which is something that can be overlooked by other running backs.

In a heavy-RPO system, it is imperative that a running back prepares himself for the possibility of the quarterback keeping the ball to make a pass.

When that happens, the back becomes either a check-down option or, in most cases, a blocker.

Hecklinski has already praised Bell for his work, but the senior has continued to fine-tune the fundamentals.

“Fundamentals are gonna get you through stuff like blocking,” Bell said. “You can be fundamentally sound and it’s gonna make it easier to block people.”

The bond Bell shares with his fellow backs may be more important than any cut or any catch he will make as an Aztec.

The running backs aren’t just competing against each other for a starting spot — they want to make each other better through competition. Each back understands that to a T.

“No one’s hating on each other and nothing like that,” Bell said. “If someone breaks off a long run, we’re congratulating that person… it’s a great (running back) room.”