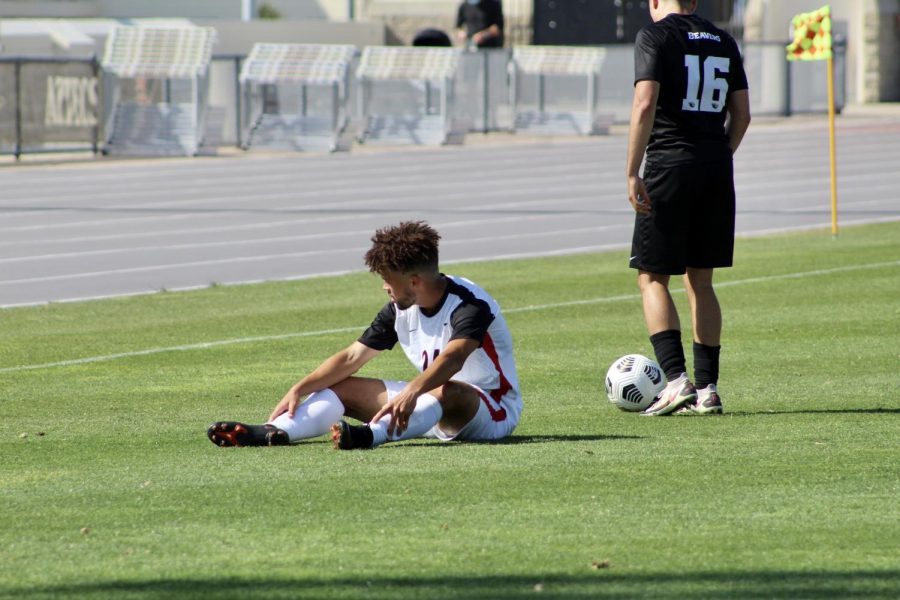 San Diego State men's soccer freshman midfielder Bryson Hankins sits down after a foul during the Aztecs' 4-0 loss to Oregon State on April 17, 2021 at the SDSU Sports Deck.

The San Diego State men’s soccer team lost its final game of the season 4-0 to No. 19 Oregon State (9-4) Saturday afternoon at the SDSU Sports Deck. This was the first time this season that fans were allowed to attend, but attendance was restricted to family. The loss gives the Aztecs a final record of 1-7-2.

It took Oregon State only 37 seconds to get its first goal of the game. A cross from the right side found its way to junior midfielder Sofiane Djeffal and his shot got through the Aztec defenders and into the far post.

The Beavers controlled the first 15 minutes of the game. They had the advantage in possession and were the more dangerous team going forward. OSU was also explosive on the counter and the pace of the forwards proved to be a problem for the Aztec defense.

Oregon State got its second goal of the game in the 18th minute when a through ball, off of the left foot of sophomore midfielder Javier Armas, found junior forward Gloire Amanda in behind the Aztec defense for a slotted finish past SDSU sophomore keeper Tetsuya Kadono. Going into the match, Amanda was the top goal scorer in the country with 13 goals.

It took just two minutes for the Beavers to get their third goal of the game off of a corner kick. The corner kick was played into the box, on the ground, directly at the feet of redshirt-senior midfielder Tyrone Mondi. Mondi evaded his defender with a right-footed turn and blasted the ball high into the top of the net past Kadono.

The Aztecs got a couple of chances before the half ended to help them claw their way back into the game. Sophomore forward Hunter George came on as a substitute in the 25th minute and provided a spark for the Aztecs with his energy and pressure on the ball.

In the 30th minute, he had a run from the left side and found his way into the box. He crossed the ball to fellow sophomore forward Austin Wehner, whose sliding attempt just missed the left post.

SDSU had another chance in the 36th minute when freshman forward John Foltyn found himself on a breakaway from half field. With an Oregon State defender breathing down his neck, Foltyn’s shot from the top of the box missed wide left.

In the first half, the Aztecs were outshot 11-5. They knew that Oregon State was going to be dangerous going forward and started the game with five defenders.

“It just gives us more cover in the channels,” junior defender Reagan Sherlock said of having five in the back. “It allows us to defend more and then together block, and then from there expand out wide as we go forward.”

The first time the two teams met in Corvallis on March 20. , OSU won the match 5-0. The Aztecs have only been shut out three times this season. Two of those shutouts coming against OSU.

Head coach Ryan Hopkins learned from the first matchup against the Beavers that they were a good team and their movement off of the ball was what made them successful going forward. The change to five defenders was an effort to help slow that down, but the Beavers movement proved too much to handle for the young Aztecs team.

“I felt like today we had a really hard time with their rotations wide,” Hopkins said. “They can pull their 10’s (attacking midfielders) into wide areas, they can get their wingers inside. They get such great rotations.”

The Aztecs came out of halftime knowing they needed to do something quickly if they were going to have a chance to get back in the game. Freshman midfielder Andre Ochoa got a chance in the 47th minute after finding space in the box. His shot from 15 yards out required a good save from Oregon State sophomore goalkeeper Roman Gabriel to keep the Aztecs out of its net.

The next good scoring opportunity for either side came in the 79th minute when Djeffal’s cross from the right side found the boot of Amanda for his second goal of the game. This goal brought his scoring tally to 15 goals, enough to earn him the nation’s top goal scorer for the 2021 season.

Of the 10 games the Aztecs played this season, six of them were against ranked opponents. According to some coaches, the Pac-12 is regarded as one of the toughest conferences in the country for men’s soccer.  Hopkins had coached in the Big 10 and the Atlantic Coast Conference before coming to SDSU.

“This league is so hard,” Hopkins said. “Everyone asks me what’s the better league. Honestly, I think it’s the Pac-12 because every team is going to play everybody twice. In the ACC, you only play teams in your division and then a few crossover games, so it’s only like seven games.”

With the season now over, the Aztecs have begun to look ahead to the next season, which returns to its pre-pandemic fall season. SDSU is a young team— there were only four players that started every game of the season, all of which were underclassmen. The young team was able to gain valuable experience that will help the program in future seasons.

“I think we’re going to have a solid team that now has the experience,” Sherlock said. “I think that we’re going to pick up some good players in the offseason and hopefully older players can mature to where we want them to be.”

Because of the global pandemic, Hopkins has been limited in recruiting new players to bring to the program. The recruitment of new players to help build a new culture at SDSU will be vital this offseason to help the team take that next step forward.

Hopkins noted that other teams in the Pac-12, including OSU, have the benefit of older international players to help add maturity to a team. Some of these senior players can be 24 or 25 years of age.

“Because of COVID-19 I’ve only been able to bring in two players,” Hopkins said. “We’ve got a few guys coming in, some internationals coming in. They’re coming in at 20 years old so they’ll automatically give us that maturity.”

There is no scheduled date for the Aztecs to start the fall 2021 season, but based on past seasons it should be expected to be sometime in mid-August.