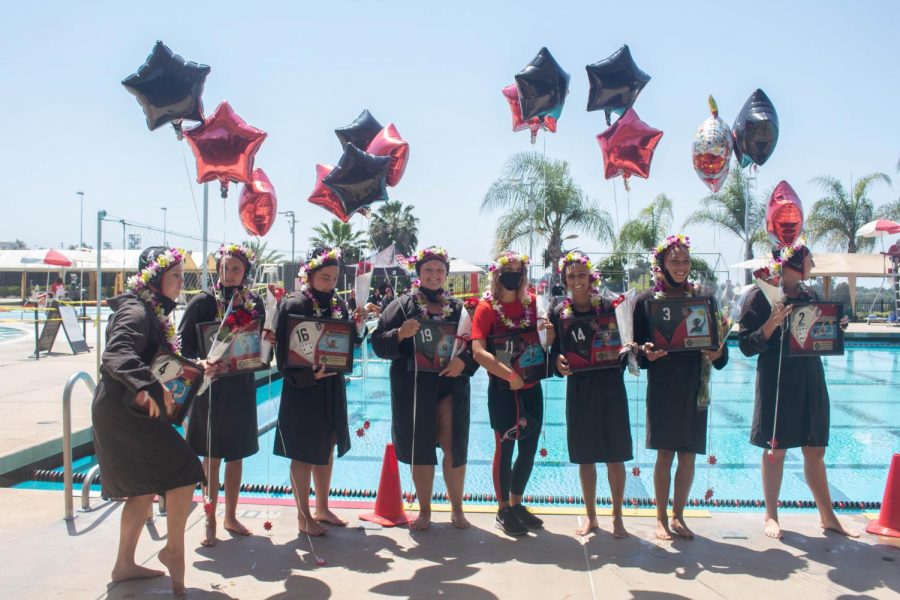 Eight seniors from the San Diego State water polo team pose for a photo during Senior Day festivities and before the Aztecs' 16-9 win over Cal Baptist on April 17, 2021 at the SDSU Aquaplex.

San Diego State water polo played its final home game at the SDSU Aquaplex against No. 17 California Baptist University on April 17, securing a 16-9 victory and a spot as a No. 2 seed in the upcoming Golden Coast Conference Championship tournament.

The seniors went on to score 10 of the team’s 16 points, with Bennett leading the team in scoring with five goals.

Bennett scored the first goals of the game at the 5:55-minute mark in the first period, and Cal Baptist quickly answered back to take a 2-1 lead. However, this was the last time that SDSU would be trailing the Lancers.

A goal by junior driver Delaney Binette with 2:38 left to play in the opening quarter put the Aztecs back in the lead 3-2.

SDSU went on an 8-0 scoring streak until the 4:19 mark of the second quarter, when Cal Baptist scored a goal to bring the score to 8-4. SDSU kept a strong lead throughout the first two quarters, and Nuuhiwa scored the final goal of the half to make the score 10-5 entering halftime.

The two teams failed to score in the first minutes of the fourth frame, but Carballo broke the silence at the 5:43 mark. The Lancers and the Aztecs then exchanged goals but it was too much for CBU to overcome.

Higginson would score the final point with just over a minute left of gameplay, adding insurance to the Aztecs’ lead over the Lancers. SDSU junior goalkeeper Raquel de Pinho led the game in saves, recording 12 over the Lancers’ eight.

SDSU is currently on a four-game win streak after bouncing back from the 10-game losing streak that started their season. The Aztecs (7-13, 6-1 GCC) play in their first game of the Golden Coast Championships on Friday, April 23 against No. 3 seed University of the Pacific Tigers (9-5, 6-1 GCC).