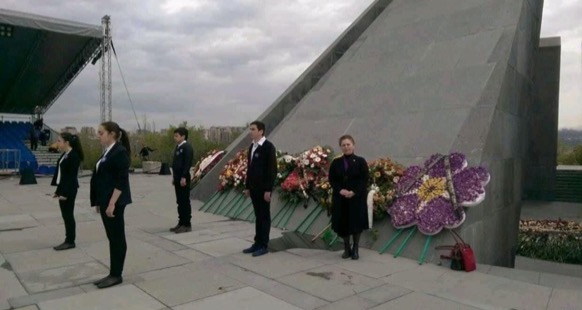 It was April 24 in Yerevan, Armenia, and Mika Melikyan was with three of his other seventh grade classmates at the city’s Tsitsernakaberd Armenian Genocide Memorial. The memorial is made of two parts. First, 12 inwardly slanted stones overlooking an eternal flame, which represents the mourning in memory of the 1.5 million victims. Second, a tall monolith representing rebirth from those atrocities.

Like this monolith, Melikyan and his classmates were grounded and standing in solidarity for those lost, but represent another generation that has been raised out of the atrocities in 1915.

In 2015, the SDSU sophomore and his family won the Green Card Lottery and immigrated to the United States, whose Congress has recognized the genocide since 2019. However, since President Ronald Reagan mentioned the Armenian genocide in a proclamation that commemorated the Holocaust, other presidents have been reluctant to use the word “genocide.”

What makes this a genocide is the intent of the Ottoman government.

At the time, the Committee of Union and Progress, also known as the Young Turks, was the ruling party of the government. Their government intended to homogenize the Ottoman Empire, to deport and annihilate Armenians and to seize the property of those killed or deported.

UCLA’s Armenian Student Association President Arman Antonyan has ancestors who were killed in the Genocide. His maternal ancestors were originally from the Erzurum and Kars provinces in Eastern Turkey, some of the many regions where genocidal policies took place.

There were two main pillars of homogenization policies within the Ottoman Empire: first, the cleansing of the Empire’s non-Muslim population, who were seen as a “cancer” of the region, and second was assimilation. The policies were accomplished by mass deportations, death marches, massacres, changing names of cities and forced conversion of religion, according to The Young Turks’ Crime Against Humanity.

The seizure of property was another element of the Armenian Genocide. According to an article published by the Journal of Balkan and Near Eastern Studies, the Young Turks had Liquidation Commissions that had the responsibility of confiscating all money, goods and property taken from deportees. They would also ask banks and individuals for the accounts and properties left behind. The commissions would later sell all these belongings in public auctions.

The evidence that proves these events as genocide includes numerous academic journals, eyewitness testimonies and even telegrams from the perpetrators themselves.

On July 12, 1915, Talaat Pasha, the political leader of the Ottoman Empire, sent a telegram to Reshid Bey, the governor of the Diyarbekir province about the plan to massacre Christians, according to The Young Turks’ Crime Against Humanity.

“In recent days massacres have been planned of the Armenians in the province, as well as other Christians without any differentiation,” Talaat said.

Talaat’s words were his bond. Christian men, women and children were killed without differentiation throughout the Eastern provinces of the Ottoman Empire.

Then on August 29, 1915, Talaat sent another telegram to the province of Ankara admitting that such crimes had been committed.

“The Armenian question in the Eastern provinces has been resolved,” Talaat said. “There’s no need to sully the nation and the government[‘s honor] with further atrocities.”

By the end of 1922, the genocidal policies enforced by the CUP reduced the Armenian population in the Ottoman Empire from about 2 million to 400,000 according to a report by The New York Times.

Given the history of the Genocide, recognition would impact people in different ways. Whether it be the ancestors of survivors or U.S.-Turkish relations.
Impact of Recognition in the United States
Whether the Armenians one knows is a celebrity or working at your local market, these people outside of Armenia are a part of the diaspora. Many ended up where they are now not because they voluntarily chose to do so, but because their ancestors were forced to aimlessly walk to their deaths during the Genocide.

The United States is one of these destinations of refuge.

According to a paper published by UC Santa Barbara, about 1.5 million Armenians living in the United States, second to Russia which has 2.3 million.

Naturally, Armenians would want the country they are living in to recognize a significant part of their history. Congress accomplished this when the House and Senate voted in favor of a resolution that makes genocide recognition and commemoration an official policy of the United States.

The Trump administration later commented that the congressional action did not reflect their administration’s policy on the Armenian Genocide, according to a report by the Associated Press.

This April 24, Armenians are hoping for President Biden to say the word many presidents have refused to use in the past: genocide.

Dr. Ann Karagozian, the director of The Promise Armenian Institute at UCLA, believes it is essential for Biden to do so and believes he will.

“[Recognition] is very important, I believe, for our country, … and for the president to acknowledge what happened to the Armenians between 1915 and 1923 as genocide,” Karagozian said. “1.5 million people perished, the repercussions of what happened still reverberate within the descendants of those who were survivors.”

Karagozian, whose grandparents lost parents and siblings during the Genocide, believes simply recognizing the events as genocide would set the record straight about the horrors that her ancestors experienced.

Although Melikyan would be happy if Biden recognizes the Genocide, he does not think it will make a significant impact.

“I would love to say that it would mean a lot to me, but really, I don’t know I’m being 100% honest with you,” Melikyan said. “I don’t think there’s going to be any serious impacts because the United States just says the word genocide.”

Opponents of Biden’s recognition of the Armenian Genocide say it will damage U.S.-Turkish relations.

Antonyan said he believes U.S.-Turkish relations are not in the best shape to begin with, so recognition would not have detrimental effects, and the climate has shifted since Congress’ 2019 resolution.

According to the U.S. Department of State, U.S. and Turkey are tied through security and economic relations. Turkey is a security partner of the U.S., being a member of the North Atlantic Treaty Organization since 1952. Economically, Turkey is the United States’ 28th largest goods export market and 33rd largest supplier of imports.

Melikyan believes although Armenians will rejoice if recognition does occur, it will have little to no impact on Turkey’s active and calculated denial of the Genocide.

According to Turkey’s Ministry of Foreign Affairs, the country’s official policy of the Armenian Genocide is one of denial. They argue that the deaths of Armenians in 1915 do not constitute genocide. They say the events are often looked at from only the Armenian perspective and accuse Armenians of infusing history with myth.

Although the Armenian Genocide has been more widely discussed within Turkey than ever before, anti-Armenian nationalist literature has also increased since the centennial of the atrocities according to an article written in Turkish Studies.

This nationalist rhetoric legitimizes political and military action against Armenians, who are stereotypically portrayed within these types of books as “dishonest, robbers, rapists, ungrateful, savage and violent.” Ölüm Ötesine Kaçış, a propaganda book published in 2015 that emphasizes Pan-Turkism with Turkey and Azerbaijan, depicts Armenians with these savage attributes.

Just last week, Azerbaijan, who also denies the Armenian Genocide, opened up a Military Trophy Park that displayed captured Armenian tanks, infantry vehicles and the helmets of dead Armenian soldiers, according to a report by Eurasianet. They also had a display of wax Armenian servicemen that many saw as having racist tropes. The artists of the display admitted to trying to make the ugliest representations they could.

The Genocide also remains a pressing issue because of the continual destruction and mislabeling of Armenian cultural heritage in Turkey and Azerbaijan.

Armenian monasteries and churches are continuously being destroyed, according to Armenia’s Ministry of Foreign Affairs. In Nagorno Karabakh, Azerbaijani officials claim many Armenian churches and former princes of the region to be Caucasian Albanian but Professor Robert Hewsen of Rowan College has proven these claims to be false, according to The Black Garden by Thomas de Waal.

“That’s the strategy of erasing Armenians from their indigenous lands,” Antonyan said. “Again, another example of why we remember the genocide.”

Some refer to these acts as cultural genocide, one of the aspects of genocide coined by Raphael Lemkin. This is different from the actual deportation and massacres associated with genocide. Dr. Karagozian said historians have cautioned not to over-use the term “genocide” to describe conflicts such as the one in Nagorno Karabakh because it may not be applicable in a legal or historical context.

Nonetheless, the Armenian Genocide remains an issue because Recip Tayyip Erdogan and Ilham Aliyev, the presidents of Turkey and Azerbaijan respectively, choose to actively deny it.

Armenians have different opinions on what they want out of Turkish recognition. Antonyan said he believes Turkey needs to recognize the Genocide and back it up with a public education campaign, but he believes it will not happen any time soon. Also, although he believes reparations in the form of monetary and property compensation are not realistic, it would be a moral conclusion.

“The reparations are a logical conclusion, the moral conclusion in some sense, [and] some sort of compensation needs to be made besides acknowledgment,” Antonyan said. “If you’re going to acknowledge that you committed a wrong, you have to do something about it.”

Despite believing that Turkish recognition will not happen in our lifetimes, Melikyan has hope for the younger generations growing up in Turkey, who he thinks have the potential to completely change Turkish society.

From the solemn stones of the Tsitsernakaberd Genocide Memorial, to living within the thriving Armenian community in the United States, Melikyan believes his country has the potential to set the precedent for other countries to recognize the Genocide.

Biden made the promise to put human rights at the forefront of his campaign, and now Armenians are waiting for April 24, a day of unimaginable suffering for many, to see if he keeps his promise.

The word Auschwitz was misspelled in an earlier version of this article.