Water polo triumphant over Pacific, move on to championship game 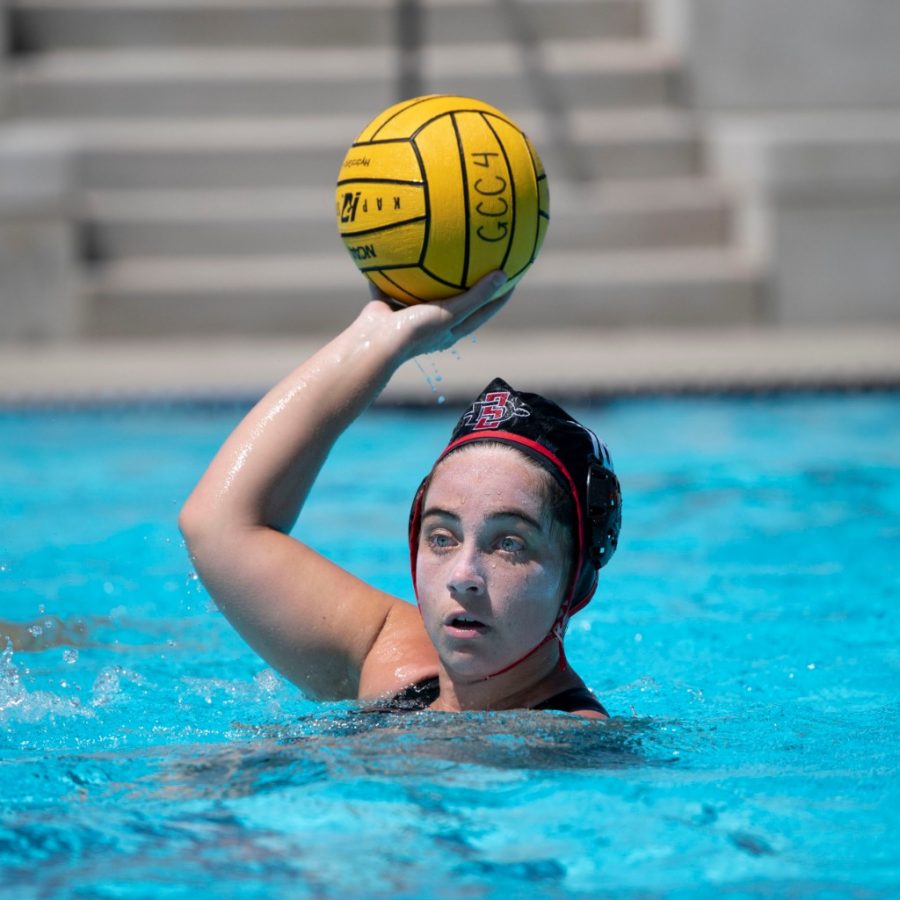 San Diego State water polo senior attacker Rory Nuuhiwa passes the ball during the Aztecs' 11-8 win over the University of Pacific on April 23, 2021 at the Chris Kjeldsen Pool in Stockton, Calif.

No. 2 seed San Diego State water polo defeated No. 3 University of the Pacific 11-8 in the semifinals of the Golden Coast Conference Tournament on April 23 at the Chris Kjeldsen Pool in Stockton, Calif.

The Aztecs, who extended their winning streak to five games, were led by senior utility Emily Bennett who scored four goals, including one with 54 seconds remaining in the game in a one-on-one situation to seal the victory.

Right behind Bennett, junior driver Spencer Samuel, who has transitioned to center, scored a hat trick with her final goal coming with 5:28 left in the match.

Both teams had stifling defense in the second half, but the Scarlet and Black still outscored the Tigers 4-2.

Tigers’ senior attacker Emma Myall, who scored twice on seven shots, put one her two shots into the net to take a 6-4 lead for Pacific with 4:05 left in the second period.

That timeout paid off as SDSU scored three unanswered goals in the final 3:41 to take a 7-6 lead going into halftime.

Defensively, all five Aztecs who had steals grabbed two steals each, with junior goalie Raquel de Pinho making six saves to go along with a couple of steals.

The first period was all about offense as each team scored four goals in the opening eight minutes.

Myall was one three players for Pacific to score two goals to lead the Tigers.

With the win, the two-seeded Aztecs will face No. 1 Fresno State, who beat No. 4 California Baptist 18-11, tomorrow at noon for the GCC Championship.

This championship game will be a rematch of when the Aztecs and Bulldogs squared off at the Aztec Aquaplex on March 27. The Aztecs pulled off a 13-12 win, as de Pinho recorded 19 saves in the one-point victory.

The winner of the championship game will also receive an automatic bid to the NCAA Tournament, which will be held at UCLA May 14-16.