Two takeaways: Looking back at the 2021 spring volleyball season 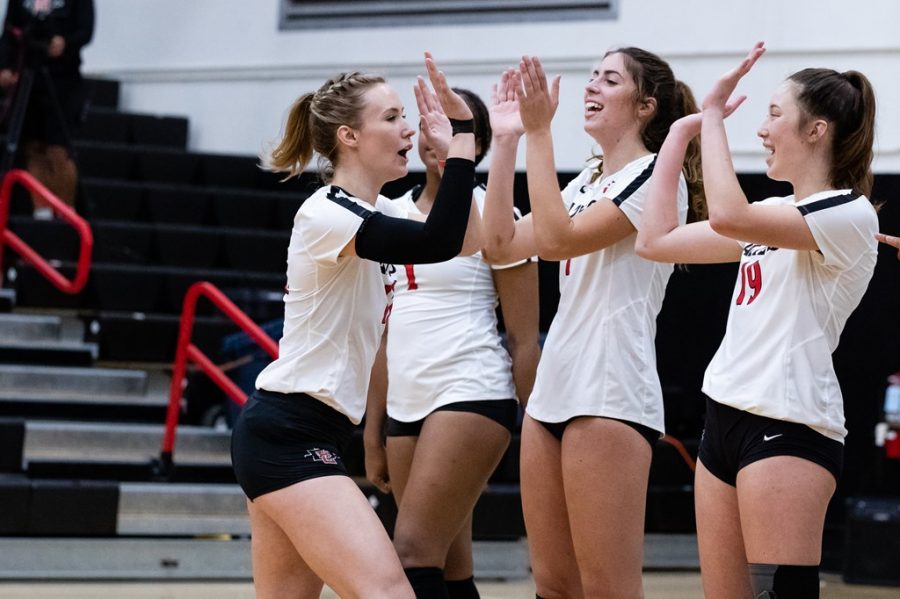 In an unprecedented year, San Diego State volleyball wrapped up its season on April 3 with a 3-0 win over Colorado State.

The fall season was pushed back into spring amid COVID-19 safety concerns, and the team dealt with venue changes and match cancellations on top of it being the first season with new coaching staff.

The Aztecs finished the season with a 6-9 record, with five of those wins occurring inside Peterson Gym.

Head coach Brent Hilliard said even though the season had its ups and downs, he is excited to see what the team can do in the coming seasons.

“We’re going to try and build consistency in the off-season,” Hilliard said. “But I’ll tell you what, it sure felt good to finish the way we did. It really gave us a lot of hope moving forward and a lot of ideas of what we need to be the team that we think we’re going to be in the very near future.”

Here are two takeaways from the past season.

The postponement of the volleyball season meant there were a lot of changes, which is something that the new coaching staff had to adjust to.

For Hilliard and assistant coach Steve Timmons, this meant they had to wait over a year to coach their first game for the Aztecs, as they were hired at the beginning of 2020.

Their first season with the Scarlet and Black was also truncated to a 16-game Mountain West  Conference-only schedule, featuring back-to-back matches against the same opponent for the first 12 games.

Despite the long wait and new schedule, junior outside hitter Victoria O’Sullivan said the coaches fit in easily with the team.

“They came in with a lot of fire at the beginning of the season and they came in with a lot of things that we hadn’t seen so far from our old coaching staff,” O’Sullivan said. “So getting used to that and with the repertoire that both of them have, it’s really easy to respect them as coaches, respect what they’re saying and that they know the tips they’re giving us will actually help us in the game.”

Although Timmons has extensive volleyball experience with two Olympic gold medals, this season marked his first as a coach.

Hilliard said Timmons continued to learn about what it means to be a coach throughout the season.

“He’s extremely positive,” Hilliard said. “The girls are extremely attentive to what he says because obviously, he has the credentials to back it up. I think he took the first season to really kind of see what the college game is about, what he needs to learn, get better at and what he needs to improve on. And I think all those things went really, really well.”

On top of the new coaching staff, SDSU welcomed several new players who made a big impact during the season.

Freshman outside hitter Heipua Tautua’a started every game for the Aztecs, only missing out on the last game against Colorado State due to a dislocated thumb in the previous match.

The 6-foot-1 freshman from Wai’anae, Hawaii proved that she could help out both offensively and defensively, posting 2.02 kills per set and 2.86 digs per set.

Hilliard praised Tautua’a for her ability to play all over the court.

“You cannot measure how good she is by what she did in her first year,” Hilliard said. “She’s just going to be incredible. She has a super heavy arm, she’s got a really good ball control in the back row, she can play defense in any position, she has great hands so she can set and she can probably block with the best of them.

“She has every skill set, and every team needs that player that can play six rotations. So for a freshman, she was exceptional. And I didn’t see a better freshman in the conference.”

In the setter position, SDSU saw time being split between freshman Kennedy Feuerborn and sophomore Ashley Vanderpan — neither of which had college-playing experience. This situation arose after senior setter Camryn Machado tore her ACL and had to sit out for the season.

Senior middle blocker Erin Gillcrist said she was excited to see the two setters gain experience throughout the season.

“She’s kind of our emotional rock,” Hilliard said. “She comes from a different mindset, where the competitiveness is just a degree higher than most of the kids that she practiced with all year. So she wants to win more, she puts in the effort, she may be the hardest-working player on our team, and she’s probably the best server on our team.”

In a season that brought so many alterations, if there was one thing that did not change, it was the experience both on and off the court.

With senior libero Lauren Lee, along with Gillcrist, O’Sullivan and junior outside hitter Maddie Lenn, the Aztecs still had the veteran leadership for a squad that was quite young.

Hilliard said having seniors like Gillcrist and Lee, who both encountered position changes, was crucial in their development for themselves and their teammates.

“(Gillcrist is) such a great person, great leader, and was a great communicator with the coaching staff,” Hilliard said. “Lauren Lee was a constant professional. She was someone, like Erin, that just improved as the season went on and really started to own her position. To go from defensive specialist to libero is a big change. She took a little time, but once she got it she was a really nice leader for the team.”

Lee finished third in the MWC with 4.11 digs per set, which includes recording 36 digs in a five-set win at Boise State on March 20, en route to receiving conference Defensive Player of the Week honors.

Two weeks after Lee’s performance against the Broncos, Gillcrist had a final game to remember against one of her home state conference opponents in Colorado State. She recorded five kills, six digs and six blocks. As a result of that performance, she also received the conference weekly defensive honor.

As Gillcrist and Lee each received MWC Defensive Player of the Week awards, O’Sullivan was able to balance it out with the offense as she was named to the postseason All-MWC team.

It is the sixth consecutive season at least one Aztec has been named to the All-MWC team.

O’Sullivan finished seventh in the conference with 3.25 kills per set and eighth in the MWC with  3.66 points per set.

The Albany, Calif. native said she was thrilled to receive All-conference honors for the first time in her career.

“I was really excited to get that,” O’Sullivan said. “I’ve been working hard all season and that was definitely one of my goals going into the season. To see that my hard work paid off and that other people were noticing was really great.”

Hilliard said the 6-foot outside hitter was a reliable and trustworthy player, especially when the Aztecs were on the attack.

“Tori has been our rock,” Hilliard said. “She’s kind of the anchor of our team. We know every team needs someone that they can count on offensively, and Tori was that player for most nights that she was on the court. We could count on her for double-digit kills and any type of pass that was awry, we’d just throw the ball up to her and she was really great for us.”

Returning outside hitters from the 2019 season in Lenn and sophomore Nya Blair had to adjust to find consistency throughout the season.

However, both players were able to click in the final match against Colorado State.

Lenn recorded five kills and a dozen digs while Blair posted five kills. The 10 combined kills continued SDSU’s runs when it was not O’Sullivan’s turn to hit.

Hilliard said those two players were able to have big games and take control of matches.

“Maddie Lenn was so great at passing in that last match, and then Nya had a few matches where she absolutely carried us offensively,” Hilliard said. “So they have that ability to step up and be great players anytime and that was something they proved. That was much needed in order to eke out some of those wins.”

Going into the fall 2021 season, the Aztecs will not have as long as a normal offseason.

O’Sullivan said having three months off compared to a six- or seven-month offseason will benefit the team, especially since the team ended the season with momentum winning three of the final four matches.

“I think that we honestly have an upper edge coming in with all our returners that have been playing year-round and have not gotten much time off this year, just not knowing when we were going to play,” O’Sullivan said. “Having all of those returners coming back next year and knowing that we ended on such a high note, we can carry that into next season.”