The Daily Aztec • May 1, 2021 • https://thedailyaztec.com/105657/sports/softball-returns-home-after-beating-utah-state-take-third-straight-series/ 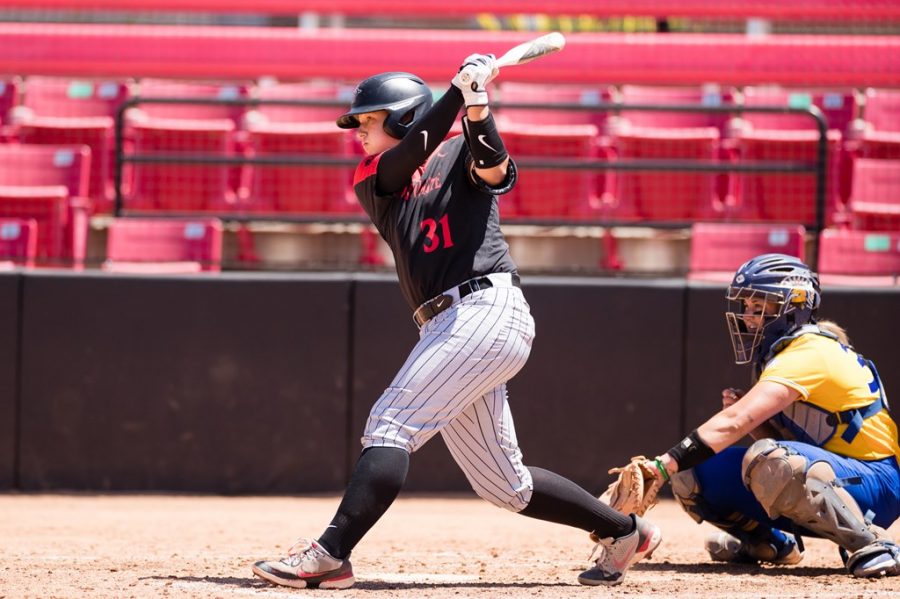 San Diego State softball hit the road last weekend in a three-game series against Utah State, including a doubleheader on April 24 and a single afternoon game April 25.

“First off I want to congratulate Kathy Van Wyk and our softball team for 800 wins, especially at one place, is pretty significant,” Hoke said to open the press conference. “My first time (at San Diego State) in 2009 and 2010 I got to know Kathy.

“Also when I was at Michigan as an assistant and then as a head coach, I got to know (Michigan softball head coach) Carol Hutchins, who is one of the great head coaches. Her and Kathy are good friends. I want to congratulate Kathy and her (players). That’s a great deal for them and for her.”

With the two weekend away wins, the Aztecs have now won three consecutive series.

The first game was a nail-biting opener to kick off the series between the Aztecs and the Aggies.

The score was close between the two teams but the Aztecs performed adequately under pressure through an impressive defensive performance.

SDSU junior pitcher Maggie Balint struck out a season-high 10 batters. The Aztecs’ defense wasn’t the only aspect of their game that shined, however.

With teamwork displayed all around ,the Aztecs took the win by a final score of 6-3.

The Aztecs took an early 4-0 lead at the start of the evening game.

SDSU senior shortstop Shelby Thompson started off the game with a double to right field. SDSU junior utility player Riley Thies then hit a single to shortstop to bring Thompson in for the first run of the game.

Unfortunately for the Aztecs, keeping the Aggies quiet did not last too long. USU fired back with six runs in the bottom of the third, challenging the Aztecs and leaving the score in USU’s favor at 6-4.

USU took advantage of the lead and followed up with four more runs in the bottom of the fourth inning — 10-4, Utah State.

With a last-minute rally, the Aztecs were able to get three more runs on the board, but it wasn’t enough to take the win.

With the final score reading 10-7, SDSU needed to win Sunday’s game to win the series.

The final game of the series started off with a bang when Thompson hit a homerun to center field in the top of the first.

Lillie followed in Thompson’s success, hitting her own homer to center in the second inning.

The power hitting did not stop there. SDSU junior utility player Danielle Romanello knocked another out of the park in the seventh inning for the Aztecs’ last home run of the game.

Bats were hot in the second inning, as back-to-back hits came from both dugouts. With both teams hungry for the series win, USU produced two homers itself.

Despite the effort from the Aggies, SDSU remained victorious with a final score of 13-10 against USU.

SDSU will face the University of New Mexico at home in a three-game weekend series beginning May 1.