The Daily Aztec • May 3, 2021 • https://thedailyaztec.com/105684/sports/anupansuebsai-wins-individual-title-aztecs-place-third-at-mountain-west-championships/ 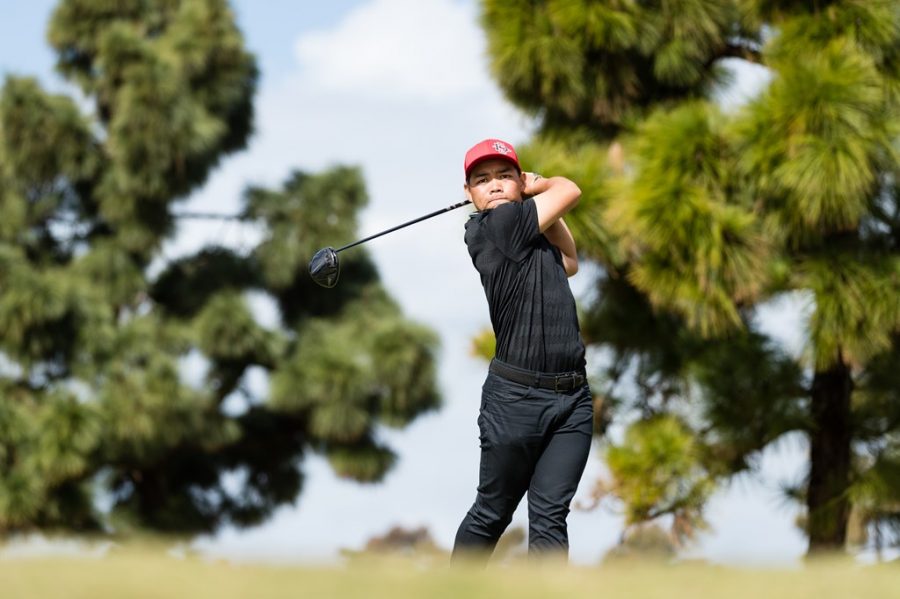 San Diego State men’s golf placed third in the Mountain West Conference Championships with a three-round score of -14 at the Omni Tucson National Golf Course in Tucson, Ariz. on May 1.

After the first day of competition on April 30, SDSU was in second place at -5 in team play.

Individually, senior Steve Sugimoto led the Aztecs after 36 holes at three strokes under par followed by junior Youssef Guezzale at -2.

Guezzale led the field with an opening-round score of 68 but faltered with a two-over 74 in the following 18 holes.

Despite being one stroke back of Boise State for the lead entering play on Saturday, the Scarlet and Black could not hold their standing as New Mexico and Nevada gained stride.

The Lobos and Wolf Pack each posted -19 in regulation, forcing a playoff. New Mexico won on the first playoff hole.

The Lobos, who won their MWC-record eighth conference championship, had a third-round score of 269, which is a new single-round MWC Championship record. The old mark was 271 by UNLV in 2009 & 2010 and their playoff-hole opponent this past weekend, Nevada.

However, individual play was a different story.

After posting a one-under 143 through the first two rounds, Aztec senior Puwit Anupansuebsai caught fire on Saturday, posting seven birdies and a bogey en route to a six-under 66 in round three.

Anupansuebsai would find himself among three other golfers tied at -7 for the individual championship.

It was the first time in MWC history a four-player sudden-death playoff would decide the individual champion.

The 5-foot-3 SDSU senior said he enjoyed the competition playing against Choi, who both were high school teammates in 2017 at the Anaheim Discovery Christian School in Anaheim, Calif.

“It was exciting to play against my best friend Sam and other guys that are really good,” Anupansuebsai said in a press conference after the tournament.

During the first playoff hole, Choi and Townsend each scored par on the par-4 18th.

Anupansuebai landed his approach shot on the back portion of the green and got backspin to get the ball within five feet of the pin to save par to move on to the second playoff hole.

“Me and the coach talked about it,” Anupansuebai said. “Just trying to give myself a chance for a par putt. I hit a perfect shot and it almost went in.”

On the second playoff hole, Anupansuebai dug himself into a hole on the par-5 10th.

His second shot landed in a greenside bunker with not much green to work with for his third shot.

But Anupansuebsai was able to dig himself out of the bunker with a sand save, landing within eight feet from the hole to set up birdie and the outright victory.

The Thailand native would sink the birdie to become the first Aztec in two decades to win the MWC Individual title. John Lepak took home the honor in 2001.

Anupansuebai said he had to control his emotions during the winning putt and once he made it to win, he needed to celebrate with head coach Ryan Donovan.

“I was shaking,” Anupansuebai said. “I didn’t know how to react. I ran up to coach and trying to hug him. I’ve been working towards (winning the MWC Individual Championship) the whole year and to finally get it done, it’s a great feeling.”

With Anupansuebai winning individual honors on the men’s side and SDSU senior Sara Kjellker winning the individual title in the women’s championship last week, the Aztecs became the first program to take home individual medals in both the men’s and women’s conference championships in the same year for the first time since 2012 when TCU accomplished that feat.

Now, the Aztecs men’s golf team will wait to hear their name as a potential at-large team in the NCAA Regionals that will take place May 17-19.

The tournament field will be announced on May 5.