The Daily Aztec • May 7, 2021 • https://thedailyaztec.com/105835/sports/softball-continues-winning-ways-with-a-weekend-sweep-over-new-mexico/ 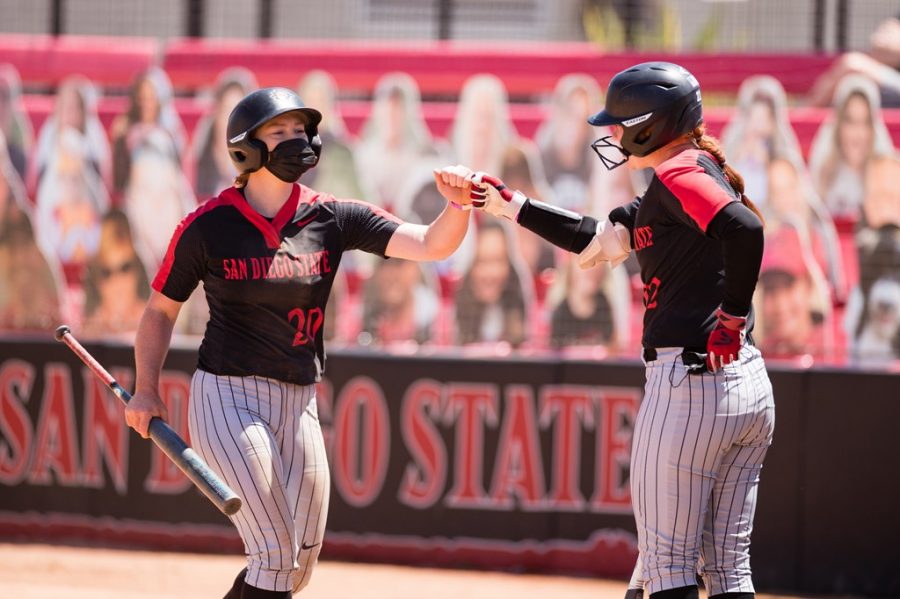 With the Aztecs in good spirits after the back-to-back wins, SDSU finished off the series with a third and final win, beating the Lobos 1-0.

SDSU junior pitcher Maggie Balint threw a five-hit shutout with eight strikeouts in the opener. After Balint’s weekend performance, she was named Mountain West pitcher of the week for the second time this season.

“Getting this recognition for the second time this season is awesome, it makes me feel appreciated for all the hard work I put in,” Balint said. “My personal goal each game is to keep a 0-0 ball game and give my team the best opportunity to win.”

The Aztecs also brought power to the plate offensively in the second game. In the bottom of the fifth, SDSU scored four times on four hits, leading to three Lobo pitching changes.

It wasn’t until the seventh inning of the final game that the Aztecs were able to secure the final win. With the only score of the game coming from SDSU freshman outfielder Eliana Reyes, the Aztecs secured the three-game sweep against the Lobos.

The Aztecs first runs came in the third inning against the Lobos. Skillful baserunning was made by both SDSU junior utility Riley Thies and SDSU senior shortstop Shelby Thompson.

The smart softball that was played by the girls allowed the Aztecs to get into scoring position quickly.

With additional errors made from UNM defense Theis and Thompson easily brought in the first two runs of the game.

The Aztecs remained at a 2-0 lead until the sixth inning when Thompson hit an RBI single scoring Theis for SDSU’s third run and final score of the game.

The Lobos, shaken after taking the first loss of the series, fired back in the first inning of the doubleheader Saturday evening.

With a single from UNM junior outfielder Peyton Robinson and a double down the first base line from UNM senior shortstop Cameryn O’Grady, the Lobos were able to get runners on base.

A fly out from UNM senior outfielder Andrea Howard advanced O’Grady to third and helped Robinson get the first score of the series for the Lobos. O’Grady quickly scored after this when UNM sophomore infielder Rachael Hathoot threw down a sac bunt.

The Aztecs remained scoreless and the quiet bats from SDSU gave the Lobos a 2-0 lead by the bottom of the second.

The Lobos, determined to keep their lead, scored again in the top of the third inning. Two walks and a fly out from UNM allowed Robinson to score for the second time advancing the lead to 3-0.

SDSU was finally able to respond to the Lobos’ action with a single from freshman catcher Sadie Langlet and freshman infielder Jeweliana Perez. The Aztecs brought in the first run in the bottom of the fourth.

At that point, the scoreboard read Lobos 4, Aztecs 1.

The fifth inning was filled with offensive action from the Aztecs. SDSU hit four and scored four, leaving only one player on base. The hot bats allowed the Aztecs to take the lead 5-1.

The Scarlet and Black did not stop the bats there, as the sixth inning was the highest-scoring inning of the game for both teams.

SDSU freshman infielder Jillian Celis brought SDSU sophomore utility player Nicole Siess in to score first on a fielder’s choice. SDSU sophomore catcher Sara Lillie was the next Aztec to bring in scores after hitting a two-run single getting Thompson and Celis home.

The Lobos were unresponsive in the top of the seventh inning and the Aztecs were able to secure the doubleheader win.

After an eventful second game of the series, the third game was quiet from both dugouts Sunday afternoon.

Both the Aztecs and the Lobos remained scoreless until the seventh inning of the game.

Celis knocked two hits and Langlet and Adams had one hit each for the Aztecs’ only offensive action in the first six innings.

SDSU sophomore infielder Jessica Cordola hit a pinch-hit, walk-off single to score Reyes in the bottom of the seventh inning. The clutch hit gave SDSU the 1-0 victory in the final game of the series and sweep over New Mexico.

“When you get put in as a pinch-hitter, you only have a certain amount of opportunities and I try to take advantage of each chance I get to help the team,” stated Cordola said of her walk-off hit.

SDSU will face Colorado State University in an away three-game weekend series beginning May 8.