The Daily Aztec • May 14, 2021 • https://thedailyaztec.com/105871/sports/two-takeaways-mens-soccer-wraps-up-first-season-with-hopkins-at-helm/ 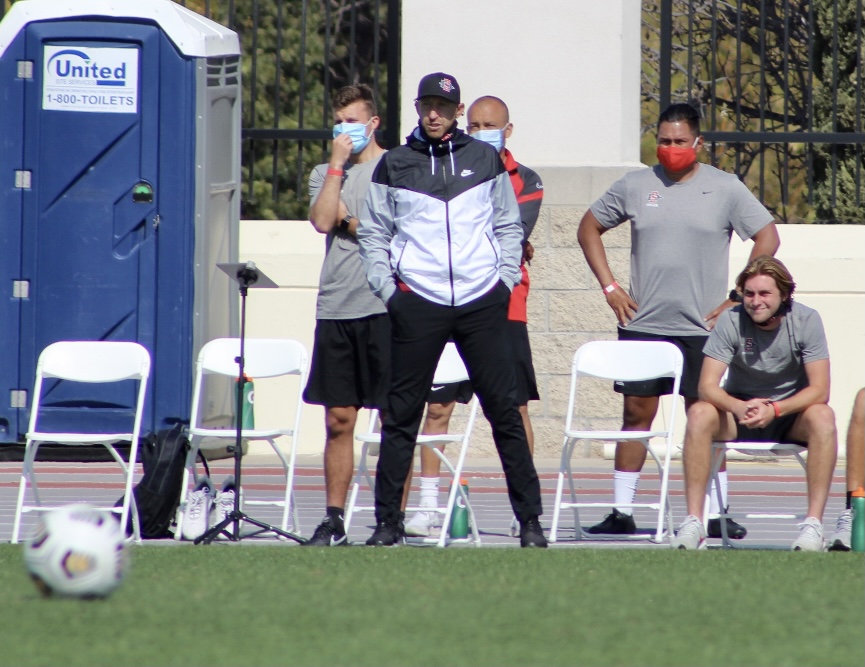 San Diego State men's soccer head coach Ryan Hopkins and his staff look on during the Aztecs' 4-0 loss to Oregon State on April 17, 2021 at the SDSU Sports Deck.

The San Diego State men’s soccer team finished its season with a 1-7-2 record. This was the program’s first season under head coach Ryan Hopkins.

The men’s team had to postpone its fall season to the spring due to health and safety concerns brought by the COVID-19 pandemic. According to head coach Ryan Hopkins, it had been 462 days between the team’s last game in 2019 and its first game of 2021.

The Scarlet and Black showed that they can keep up in a competitive Pac-12 Conference. Of the 10 games they played, four went to overtime and three of their losses were by one goal.

Their lone win of the season came against Washington (ranked No. 4 in the nation at the time). Washington was the only Pac-12 team to reach the quarterfinals of the NCAA Tournament, where they were knocked out by No. 2 Pittsburgh.

Despite the record of the team, the Aztecs gained experience and adapted to a new system of play that could benefit SDSU in the seasons to come.

Here are two takeaways from the past season.

Hopkins was hired back in Jan. 2020 to replace longtime Aztecs coach Lev Kirshner after his 20th season as head coach. Hopkins was an assistant coach at Virginia from 2018-2019 and helped lead it to the NCAA championship game before taking his first head coaching job at SDSU.

The COVID-19 pandemic made Hopkins’ first season as a head coach abnormal. There were limitations, strict protocols and uncertainty that factored into the preparation for the season. Hopkins had to inherit a squad and his recruitment abilities were limited.

Nevertheless, Hopkins implemented his new system and new culture into the team this season. His system involves a high-pressing style and an analytic approach to the game.

“Hopkins likes to play a very high-pressing game,” Bowen said. “It’s very fun and it’s good for us, but it’s a lot of work. It will come together, and when it does, it’s going to be scary.”

For everyone to buy into a new culture it means everyone has to be involved. Whether starting or on the bench, everyone must be engaged with what is happening on the pitch.

This season, the team had an energy that was only visible for fans who were able to attend the last game of the season. Ochoa said throughout the year, the bench stayed involved in the game and encouraged teammates to make up for the lack of energy normally brought by fans.

“Coach is trying to bring a new culture into San Diego State,” Ochoa said. “He wants to change the program around and get everyone involved, whether you’re starting or on the bench, always have support for your teammates and build that culture. When you build that culture, you start winning games and hopefully we can do that by next season.”

Hopkins was an advocate for the use of analytics this season. Hopkins uses these methods as a way to show the team ways it can improve and as a way to show proof that what he is teaching is working.

With his high-pressing style, one major defensive analytic Hopkins and his staff track is ball recoveries.

“We want to get over 40 a game,” Hopkins said. “We averaged 36.4, which is probably top 10 in the country. We can set pressing traps on the field to get our opponents in bad areas where we can win the ball and score quickly. But then, we will break it down for each player and each position. That way, each position will have a different number they need to contribute to that overall 40 number.”

Offensively, Hopkins and his staff track passes into the penalty area and expected goals.

“Passes into the penalty area is a big statistic — we want over 20 of those per game, and then expected goals is a big one” Hopkins said. “It’s really about showing our guys that they can be a bit more patient. We can work the ball closer or more central to where your percentages go up. We help the guys with shot charts and things of that nature, and we’ll do that in training.”

The Pac-12 is regarded as one of the toughest conferences in men’s collegiate soccer. Three of the six teams qualified for the national tournament this season (Stanford, Oregon State and Washington).

“The competition is really high,” Ochoa said. “There wasn’t one team that was bad, every team was good. Every game was a war.”

Given the competition level of the Pac-12, a .500 conference record combined with nonconference wins could be good enough for an at-large bid in the tournament.

Because of the pandemic, the Scarlet and Black were limited to only playing a conference schedule.

As a young team in the Pac-12, student-athletes had to adapt to a new form of identity implemented by Hopkins.

“We were just trying to create an identity — I think that’s something the program has never had,” Hopkins said. “ I think it’s just more of a collection of players and just kind of get out there and play soccer for lack of a better, more technical term.”

Hopkins said he wanted to focus on creating a style of play in which players knew what to do without the ball and could autonomously switch their position on the field with possession.

“I think from those perspectives we made great great strides,” Hopkins said. “Anyone that watched us could definitely see what we were trying to do on both sides of the ball. Now, did it always look the best? No, probably not in all events, but we are always going to have those things come up.”

Hopkins said that even without a standard recruiting period, he was  happy with the pieces that came together and believes the team has a solid platform for the upcoming fall season.

The Aztecs managed to compete with 13 freshmen, seven sophomores, four juniors and a lone senior. For the returners, this gives room for improvement to apply what they have learned in this past season.

“I think that definitely our clearance and our box-to-box defending definitely has to improve  and overall positioning, being aware of where you are,” Hopkins said. “One yard matters and if I’m yelling at you for that one yard, it’s not because I’m trying to be a dad — it’s because it matters. My hope is that we learned some of those lessons the hard way, but those will be big things we’ll work on for the preseason.”

Bowen said the Aztecs’ 2021 opponents were competitive but the experience will favor them next season.

“We wouldn’t want to stay in that mindset, being an age younger, but we’re new and we’re coming together now,” Bowen said. “But we will be dangerous and will definitely be a lot better than we were this year.”

Hopkins said he plans to bring in a couple new faces to the program as they will be working virtually doing non-physical work as well as in-person training.

“We are really excited about how the recruiting class is shaping up and I think that the maturity and high level of intensity and focus that they’ll bring will also help bring some of that to those younger guys,” Hopkins said. “It’s about our performances everyday. Trying to be the best version of ourselves is what’s going to get us results.”

Hopkins has already made his imprint on the men’s soccer program by simply getting better results this season than what the program had done in the past three years combined.

Now concentrating on the process of preparing for yet another fall season following an unconventional COVID spring season, Hopkins looks forward to seeing his student-athletes return to the pitch for training.