The Daily Aztec • May 22, 2021 • https://thedailyaztec.com/105947/sports/womens-tennis-team-stronger-after-unprecedented-pandemic-season/ 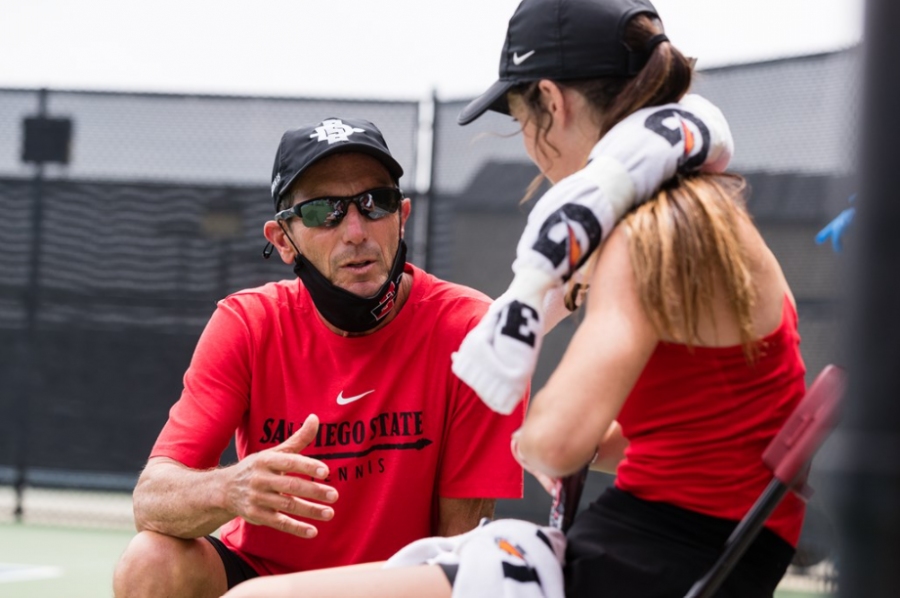 The San Diego State women’s tennis team finished up their season on April 20 with a 3-4 loss to the UNLV Rebels.

It sure was a journey to get to that final game.

Two more games were cancelled after COVID-19 complications cropped up with two of their opponents.

The Aztecs still carried on. Despite ending with a 5-9 record, head coach Peter Mattera said his team never lost hope during the season.

“I was very proud of the girls and the fact that they stuck to their guns and played with heart and soul the whole year and really didn’t turn on each other or on the coaches,” Mattera said. “I told them several times throughout the spring… this is a year you won’t ever forget.”

Here are three takeaways from the season.

Just an hour after their schedule was announced, the SDSU athletic department paused both the men’s and women’s season.

A two-week pause to quarantine meant the season wouldn’t begin until Feb. 28 against UC Irvine.

This meant the first two games against Cal State Fullerton and Hawaii were postponed. Games against Gonzaga and Point Loma were outright canceled.

Even when they got to play games, the Aztecs were short-handed on several occasions. More than one meeting saw SDSU forfeit sets due to being down a player or two.

Senior Abbie Mulbarger said the team was shocked when they heard the season was paused almost as soon as it began. However, Mulbarger also said the team took that time to mentally prepare for whatever curveballs came their way.

“We were ready for those matches, and then we just got a call one day, and it was just like, we got to pause,” Mulbarger said. “And I think it gave a lot of us a lot of time during those two weeks to think about how we wanted the season to go from there, because we weren’t expecting that pause.”

The postponement didn’t prevent the Aztecs from jumping out to a fast start, winning two of their first three games.

Then, the cancellations came and resulted in a short-handed squad. For a three-game stretch, SDSU played with at least one forfeiture due to being undermanned and lost two of those games.

Despite the circumstances, Mattera said that this didn’t keep his players down, but instead made them play with just as much tenacity as before.

“I thought that the players took the high road,” Mattera said. “Every time we got on the court, the team played with as much heart and soul as they could no matter the circumstances.”

SDSU had something that not many other teams had: an experienced roster.

Out of the eight players (nine before sophomore Julia Jordan opted out of the season) on the roster, six of them are either juniors or seniors.

When COVID-related pauses hit and when younger players needed someone to look up to for guidance, it was the three seniors who gave that guidance.

Mulbarger welcomed the added responsibilities. As a freshman, she had similar nerves when she started, but the seniors supported her and the other players.

Now, she had an opportunity to pay it back.

“It kind of made me realize that when I wanted to be an upperclassman that I wanted to be just as supportive,” Mulbarger said. “Having a bunch of upperclassmen, we all know that we have a responsibility to you know, kind of look out for the younger girls.”

Not only did the seniors demonstrate leadership off the court, they showcased their skills on the court.

Nadozie and Arnold posted singles records of 7-4 and 5-1 en route to being named to the women’s tennis All-Mountain West Conference singles team. Nadozie, alongside junior Alicia Melosch, was also named to the All-MWC doubles team with a 2-1 record.

Mulbarger posted a 2-4 singles record in her final season. She will be the only senior who will not take the extra year of eligibility granted by the NCAA.

Mattera has seen all three of these players grow under his tutelage and was continuously impressed by their growth.

“They’re usually scared little freshmen with almost no exceptions when they first arrive,” Mattera said. “You watch them mature and grow and get ready for the next stage of their life. And that, to me, is one of the best things about my job.”

Paving the way for the future

With Jordan opting out of the season, that left sophomore Cecile Moran and freshman Alexandria Von Tersch Porter as the only underclassmen on the roster.

Being an underclassmen is always tough on a player. They are adjusting to their new lives in college, learning more complex styles in their sport and playing against the strongest competition they’ve ever faced.

As an added bonus, they are sometimes required to do this miles and miles away from home.

Now, take all of that and put it in a box. Tie it together and wrap it up with a global pandemic that turns a once promising first year into a wild Pandora’s Box of a season.

That is what Tersch Porter and Moran had to deal with this season.

From what Mattera and Mulbarger saw, it didn’t break them. It only strengthened their resolve and made them better tennis players.

Moran showed incredible grit during her matches, leading to Mulbarger and the team dubbing her “The Three-Set Queen” after taking a majority of her opponents to three-sets.

“You can count on her, you know, she’s gonna go out there and give her everything to try and win that match,” Mulbarger said. “She was always out there fighting until the very last point.”

Tersch Porter, on the other hand, posted only a 1-6 singles record and a 3-3 doubles record when paired with Mulbarger.

The stat line doesn’t tell the entire story. “Freshy,” as Mattera called her, endured at least two COVID-related pauses during the season. When fall rolled around, Tersch Porter was working even when her teammates were unable to join her.

She was given a chance to opt out of the season and return to her home in Orange County.

Instead, she stuck to the court and rode out the storm.

“I really give her a lot of credit, because some people would have packed up their bags after that first pause in the fall,” Mattera said. “I think that if she can survive this… a regular year is going to be like a dream come true for (her).”