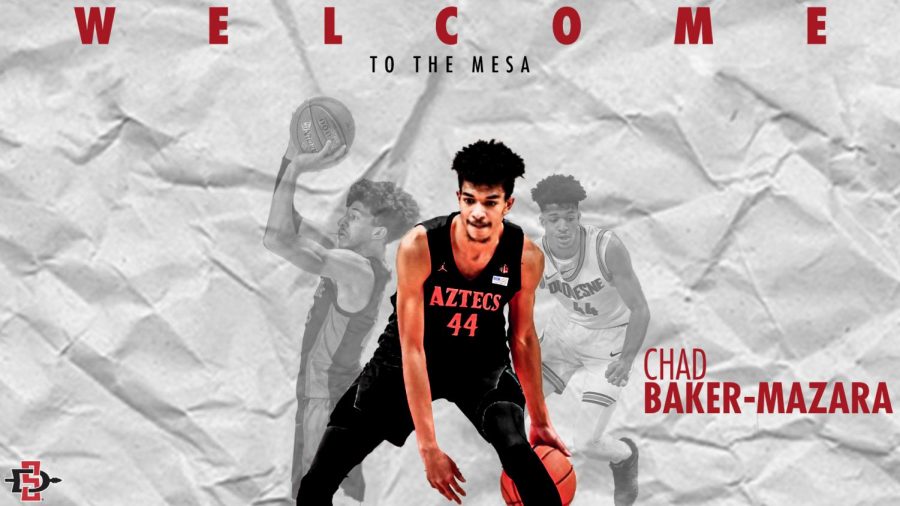 Baker’s addition to the team was announced by the university in a tweet sent out on Tuesday, June 22.

The 6-feet-7 inch wing will enter SDSU as a sophomore with four years of eligibility and is immediately eligible to play in the upcoming season.

Baker-Mazara first announced he would enter the transfer protocol on April 29 after spending his freshman season at Duquesne University, where he averaged 9.5 points on 43.8% shooting while playing 24.4 minutes per game.

Baker-Mazara didn’t stay in the transfer portal long, as he announced that he would be donning the Scarlet and Black just one week after entering the transfer pool via Twitter.

With the addition of Baker-Mazara, the Aztecs hope to regain some offensive firepower after losing two seniors, second-team All-Mountain West guard Jordan Schakel and Mountain West player of the year Matt Mitchell, to graduation.

Baker-Mazara played 15 games for the Dukes as a freshman and recorded double-digit points in five of them.

Baker-Mazara scored over 20 points in a game on two separate occasions. One such matchup against Fordham University saw him drop 23 points while shooting 8-15, with 21 of those 23 points coming from beyond the arc.

He was very efficient from the three-point line, landing 41.7% of his three-point attempts, the second-best mark amongst freshmen in Duquesne history.

His 13 blocks last season were good for second on the team behind senior Michael Hughes’ 23. Baker’s 15 steals tied freshman Toby Okambe for fourth on the team.