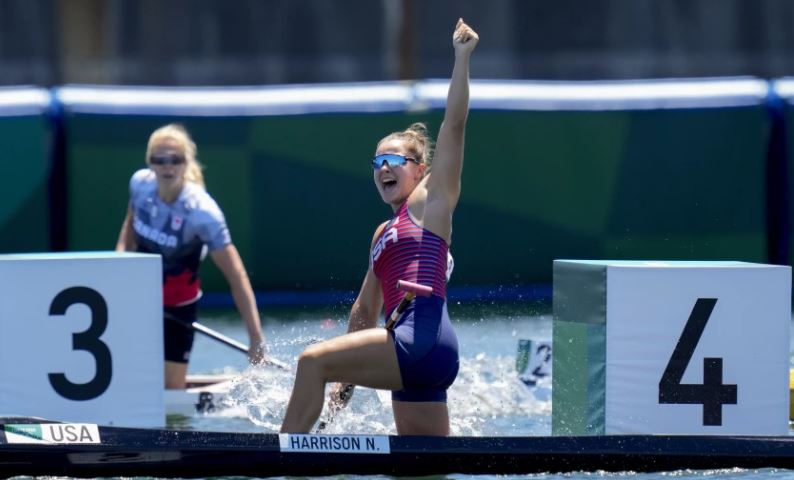 by Jason Freund and Andrew Finley

They made the most of their time in Tokyo, with Xander Shauffele winning gold for the Men’s individual event while incoming freshman Nevin Harrison won a historic gold medal in the 200-meter canoe sprint.

Heading into the Olympics, Shauffele faced not only stiff competition from the 60-man pool but also the sweltering Tokyo humidity.

On the final day of golf, Schauffele began to hit a skid while Rory Sabbatini of Slovakia went on a torrid hot streak to finish at 17-under-par.

Schaufelle’s luck began to turn on the last two holes, gaining a stroke on the penultimate par before ultimately sinking a three-yard putt to stand atop the Olympic pedestal with a gold medal dangling off his neck.

As an incoming freshman, Harrison has already cemented a chunk of her legacy as an Aztec for life by becoming the first American woman to win Olympic gold in a canoe sprint since 1988.

The 19-year-old from Seattle, WA went into the final race as the favorite to win the 200 m sprint and didn’t disappoint, rowing her canoe to the finish line in just 45 seconds, earning her first medal in as many Olympic games.

Tomasin began his rugby career when he was 16 years old following in his cousin’s and uncle’s footsteps. A proud Aztec, Tomasin played on the ARC’s rugby team on campus where he got recognized by the U.S. National team in 2013 and earned a spot on the USA’s Men’s Eagles sevens team in 2017.

Representing Jamaica, Rickkets qualified for the triple jump by winning the Jamaican Senior National Championship on June 26 with a 14.46-meter mark.

A three-time NCAA triple jump champion, Ricketts earned a spot in the final event by placing fourth in Group B with a 14.43m jump.

Ultimately, she came up just short in the finals. Her 14.84-meter jump was .03 meters short of Spain’s Ana Peleteiro’s 14.87m mark, placing her at fourth place and just outside the pedestal.

Aredilla transferred to SDSU from Mt. San Antonio College and spent two seasons for the Scarlet and Black while O’Toole signed a national letter of intent in December of 2020.

Mexico lost their first match 2-0 against the United States on Day One, but earned a shot for the bronze medal by defeating Italy 5-0 on Day Two and Australia 4-1 on Day Three.

The winning ended there as they were dropped by Canada in a tight-knit 3-2 match.

Aredilla saw little playing time in the Olympics, playing in four games and going 0-3 with a strikeout. O’Toole pitched in four games, posting an 0-2 record with a 1.24 ERA in 17 innings pitched.