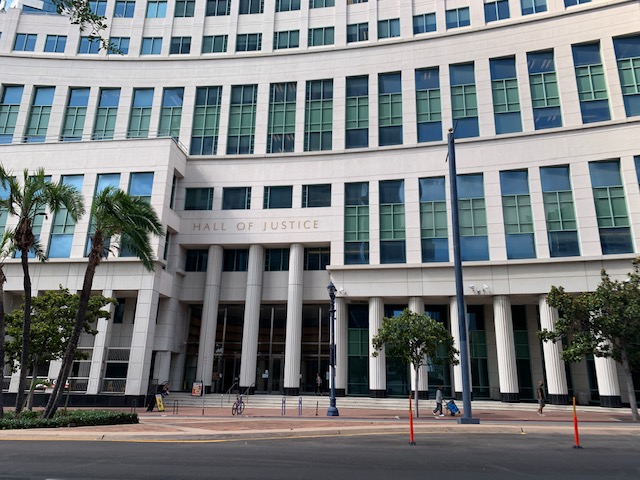 Hall of Justice located in downtown San Diego where lawsuit is available for public viewing.

by Catlan Nguyen and Jayne Yutig

On Aug. 6, the San Diego County Superior Court set a trial date for the wrongful death lawsuit of a 19-year-old San Diego State freshman who died in 2019.

Initially filed by the father of the freshman, Dylan Hernandez, the 14-day jury trial for the suit is set to begin on Aug. 5, 2022.

The judge presiding over the hearing set pre-trial proceedings to begin on May 6, 2022.

The 14-day jury trial was agreed upon by the attorneys representing the Hernandez family and attorneys for the defendants before it was approved by the superior court judge.

Hernandez’s death back in Nov. 2019 came as a tipping point for leaders in the SDSU community to examine ongoing issues within Greek life at the university.

After the university’s investigation into Hernandez’s death, two presidential task forces were created by the university to implement measures to prevent hazing and substance abuse within fraternities.

While some fraternities were already suspended at the time, all quickly became suspended and faced further punishment even before Hernandez’s death was confirmed to the public.

“The university does not comment on situations involving active litigation or investigation,” SDSU said in a statement.

During the case management conference earlier this month, an attorney representing the Hernandez family disclosed to the judge that private investigators were having difficulty serving two additional unknown defendants with notice of the lawsuit. The attorney for the Hernandez family said he hoped to have the lawsuits served to the two additional individuals within 60 days.

SDSU President Adela de la Torre, Aztec Shops and an ombudsman from the university filed demurrers earlier this summer in response to the initial lawsuit, claiming the Hernandez’s family had no grounds to sue them for the reasons stated in the initial suit filed in Nov. 2020.

“The complaints’ failure to differentiate between the numerous defendants and assign conduct to each defendant renders complaint subject to demurrer,” the demurrer file said.

Almost every defendant has also filed for a motion to strike, which means their names would be removed from the record.

Lawyers for the Hernandez family responded to a demurrer filed by the CSU.

“Despite its promises and duties, Defendant and it’s agents, Adela de la Torre, Darrell Hess, etc. … knew that over ten other people had previously reported being injured by Defendant’s dangerous products (the Foliot bunk beds in particular) and knew that ongoing crimes had been committed at properties under Defendant’s control (e.g. 5804 Montezuma Road),” according to SD County Superior Court records.

Aztec Shops is listed as a defendant because they are property owners of The Fraternity Row apartments on campus, which is where the incident happened, along with other allegedly illegal acts.

According to court records, lawyers for the Hernandez family allege Aztec Shops was knowledgeable about how their properties posed a threat to the public and failed to report illegal activities to authorities per lease agreements.