How SDSU music majors navigated through the COVID-19 pandemic 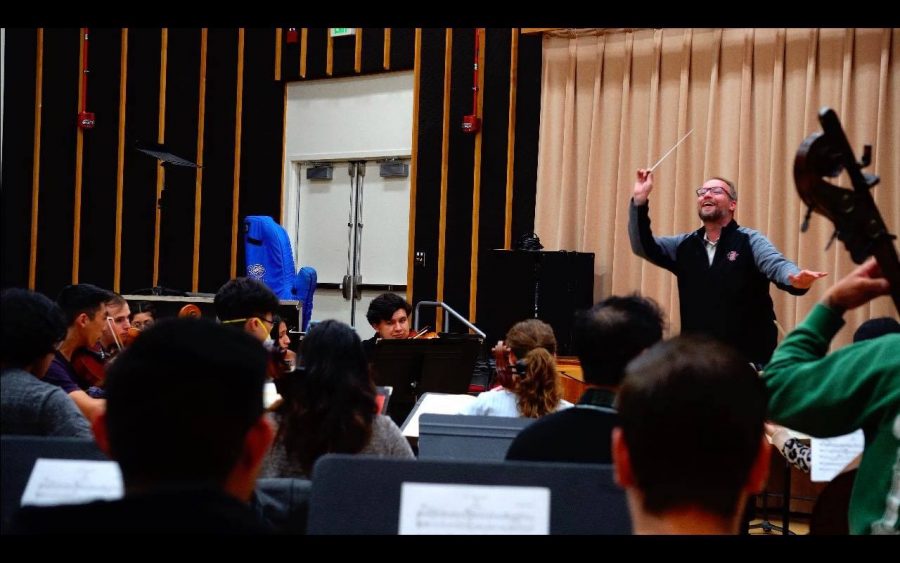 Michael Gerdes conducting the SDSU orchestra in a performance of Edward Elgar's "Enigma Variations" in March 2020.

The pandemic affected students in many ways. With campus shutting down and moving, music majors were particularly gloomy.

Around the corner of each hallway, many mourned their canceled performances and recitals. In a Hail Mary, performances were rescheduled to an earlier date before they were all canceled. Graduating seniors worked towards their entire degree in preparation for their senior recital and were crushed to learn it was indefinitely postponed.

The world around musicians became brighter once rehearsals were back in person and performances were allowed in the halls. Even without a live audience, it was a small win, and the music building started to feel alive again.

The start of the semester is an exciting experience, especially for incoming freshmen. This last week, the area around SDSU has started to buzz with energy. All things considered, many music majors that have been around for the pandemic are concerned that this eagerness could still bear negative consequences for their educational and professional opportunities because of COVID regulations.

During the peak of the pandemic, some music majors struggled more than others. Alex Soto, a junior-level percussion education major, expressed his eagerness for the coming semester.

“I, for one, am really excited to go back to in-person classes because, as a music major, and specifically as a percussionist, I need all of the equipment [available] in the music building,” Soto said. “With the lockdown, it was hard for me to get in the practice that I deserve; whereas wind, string, and piano players most likely have their instrument at home.”

For nearly three full semesters, music majors were denied the opportunity to perform with large-ensembles, a crucial experience for those pursuing a career in music. With SDSU returning to primarily in-person instruction, on-campus performances are being scheduled again. That encompasses the greater portion of the music major experience: listening, learning and performing.

Sade Rains, a junior in the piano education program, voiced similar excitement accompanied with an emphasis on the difficulties of online music learning.

“I’m really looking forward to going back in person. There were so many things that professors and students couldn’t pick up from each other with online private lessons,” Rains said. “It was especially hard going to online music school knowing how fragile the music industry is right now. There was minimal work for a lot of musicians but people still managed to get things done. I think with… we’re going to make the most out of our time finally back in person.”

All things considered, music majors are approaching the semester with cautious optimism. Amidst the excitement, Rains voiced some uneasiness.

“My only concern is having to go back in lockdown and trying to figure out how we’ll play music together again,” she said.

She is certainly not alone in this sentiment. Other musicians like Chris Chapman, a junior in the piano performance program, voiced similar hesitation.

“Until I’m actually doing a performance, I am keeping my hopes down,” expressed Chapman. “We could shut down again.”

Soto’s excitement is similarly laced with a thread of concern.

“I am worried that the rest of the school, and specifically Greek life, [will] get free passes to keep congregating without masks or social distancing, and continue to put the rest of the school population in danger… We see and hear all these people going to parties without masks… Recently, band camp got pushed back almost two full weeks because of COVID regulations and… putting students’ safety first. I find it a little unfair that the school doesn’t crack down on Greek life hard enough to give the rest of school activities the chance to take part in school life… Frankly, Greek life is not [and should not] be the center of what SDSU is about.”

Caution is paired with hope so that everything that has been regained isn’t taken away as swiftly as it was last March. Even before school is in session, the music building has become alive with music again. Still, all music majors can do is hope that this experience isn’t short-lived, and that they can return to the most engaged form of their craft that they already know they love.