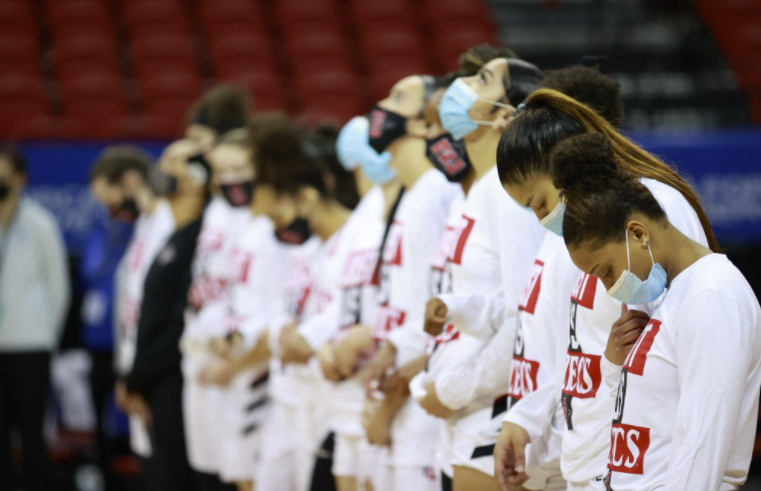 The San Diego State women’s basketball team released its upcoming schedule for the 2021-22 season. After an injury-filled 2020, the Aztecs look to improve upon their seven-win season a year ago, with returning senior starting guards Sophia Ramos and Alex Crain along with junior guard/forward Mallory Adams leading the charge.

The Scarlet and Black begin their 2021 season with an exhibition game against Biola University on Oct. 28, tipping off their season a month sooner than they did a year ago, followed by their home opener against Cal State Los Angeles on Nov. 9. The Aztecs take road trips up Interstate 5 to take on UC Irvine — who beat the Aztecs 66-55 last season — and Cal State Fullerton on Nov. 14 and 16 respectively before heading back to the Mesa to face Georgia Southern and University Alabama Birmingham at the Viejas Arena on Nov. 20 and 22.

The Aztecs then hit the road to Berkley to participate in the Cal Classic, where they’ll face Ole Miss and Furman before coming home on Dec. 1 to take on familiar foes USD and Cal Baptist a week later on  Dec. 8 in Riverside, CA. The Aztecs faced both of these teams in 2020, defeating the cross-town Toreros 64-56 and falling to CBU 75-71. The Scarlet and Black finish non-conference play at home, facing UCSD Dec. 16, and Ohio State on Dec. 21.

The Buckeyes finished their season with a 13-7 overall record and finished the season ranked 22nd in the NCAA, according to AP Top 25. OSU is the only Power-Five conference opponent on the Aztecs’ schedule in 2021 besides the Southeastern Conference’s Ole Miss.

After the Aztecs take on the Buckeyes, it’s all Mountain West Conference play from then on. The Scarlet and Black will play each of their conference opponents twice, once on their court, and the other at Viejas Arena, except for UNLV and San Jose State — whom they play once on Feb. 12 and 16 respectively. Every MWC opponent was a team the Aztecs faced last season.

The Scarlet and Black start their conference play with a home game against Wyoming on Dec. 28 and will travel to Laramie, Wyoming to face them again on Feb. 26. The Aztecs lost both of their games against the Cowboys last season by a combined score of 116-77.

The Aztecs then travel to Fresno State for their first away game in conference play on Dec. 31 and play them again on Feb. 19. SDSU won their first contest against the Bulldogs last season in a 79-77 nail-biter but failed to secure the second game, falling 82-61.

After the one-game road trip, the Aztecs come home to take on the Colorado State Rams and travel to Fort Collins to face them again on Feb. 24. CSU was the first MWC opponent the Aztecs faced last season — scoring 77 points per game against the Rams. Despite the strong offensive showing in both games, the Rams would prevail, scoring a combined 170 points in their two games against the Scarlet and Black.

SDSU plays the University of New Mexico Lobos twice in January: first on the ninth in Albuquerque and the second on the 29th on the Mesa. The Aztecs could only muster 48 points against the Lobos last season, losing both contests by a combined score of 149-94.

The Scarlet and Black come home from New Mexico to take on the Utah State Aggies on Jan. 13, and travel to Logan, UT on Feb. 2. In their lone game last season, the Aztecs defeated the Aggies 68-60.

The Boise State Broncos come into town two days after Utah State on Jan. 15 to take on the Aztecs, who will travel to Boise on Feb. 5. In an exciting finish to the regular season, SDSU split the two-game series against Boise State winning the first game 74-72, and falling 85-44 that same weekend.

The Aztecs hit the road to Reno to take on the Nevada Wolfpack on Jan. 19 before they meet back up on Feb. 9 at the Viejas Arena. In a close series, the Aztecs scored 59 points in each game versus the Wolfpack in 2020 but were only able to take the first of the two games.

The Scarlet and Black return to Viejas a week later on Jan. 27 to face Air Force, whom they also finish their season against on March 2. The matchup between these two teams couldn’t have been any tighter in 2021 as each team took one of the two games. The Aztecs outscored the Falcons by the slimmest of margins 113-112.