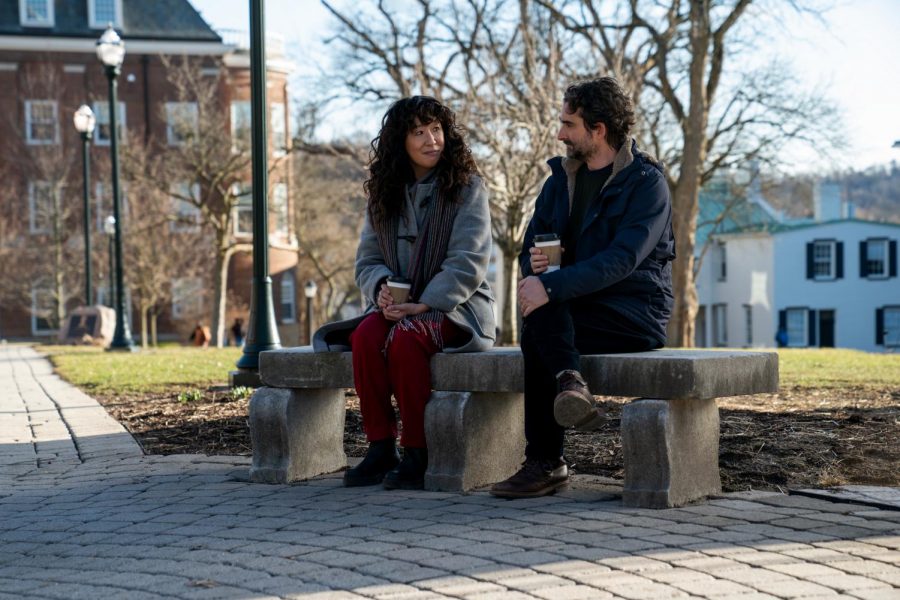 Amanda Peet almost winced at the idea of timing the topics of her show.

The unintended consequences of creating her ideal workplace romantic comedy ended up being a poignant, subtle discussion of power dynamics in academia– one that sent Sandra Oh to the trending topic bar on Twitter upon its release.

“The Chair,” Netflix’s new half-hour comedy, stars Sandra Oh as Ji-Yoon Kim, the newly minted chair of a failing English department facing dizzying personal and professional pressures. Jay Duplass stars as Bill Dobson, an experienced professor but new empty-nester and widower, who makes a controversial move in one of his classes. The situation only gets more complicated, leaving Ji-Yoon to navigate student protests, her role as a new leader and the budding relationship between herself and Bill.

It’s not a perfect show, but it’s an overachiever. Categorizing “The Chair” as a workplace romantic comedy feels like trying to box it up into what it’s not. It has all of the ingredients– a masterclass in comedic acting (particularly from Holland Taylor), a delicate and effortless chemistry between Duplass and Oh and a realistic workplace. What it ends up creating stretches beyond genre conventions too much for it to hold onto the labels.

The show is produced by David Benioff and D.B. Weiss in their first major project since showrunning “Game of Thrones”– and in a lot of ways, there is a distinct cross-section between the tones of both shows. Both are coated in muted colors, feel hyper-realistic while otherworldly and are most likely to please fans who are willing to lean into their dark academia side. In many ways, it’s an excellent satire of the higher education system in America; if only it would lean in more. It examines how power affects the relationships between family, lovers, coworkers and friends by putting it in a familiar setting: college.

“It explores how behind the times higher education can be. But, it wants to be, and can be, at the forefront of thought,” Oh said about the show. “It could be a place where movements begin or young people are really starting to explore concepts or opinions for the first time. It should be on the forefront. But I feel like we all know it needs to question itself just like all of us at this point need to question ourselves.”

More than anything else, “The Chair “is reminiscent of HBO’s “Succession,” a story of a wealthy and powerful family’s ongoing struggle with naming a successor to their father’s media empire. Both are stories of deeply flawed people throwing power around like hot potatoes, and both shows struggled with finding their footing in the first season. The Roy family of “Succession” was, from the jump, deemed an irredeemable group of frightening narcissists, which serves its satire. The English department of “The Chair” sits uncomfortably in their morally gray nature, which will work towards its respective satire if the show’s confidence increases.

“The Chair” is definitely worth the watch, even though it’s a short one (the first season is only six half-hour episodes). Oh and Duplass are marvels as Ji-Yoon and Bill, and I would be shocked if the show wasn’t shortlisted for any number of Emmys in the next year. The way that power is examined from the lens of age, race, sex and social institutions is rarely done with such grace.

It’s up to the viewer to decide if Peet created the most heavy-handed office rom-com ever written or a lighthearted real-world “Game of Thrones,” but maybe it’s all about perspective– and maybe that’s the message she wanted to get across the entire time.