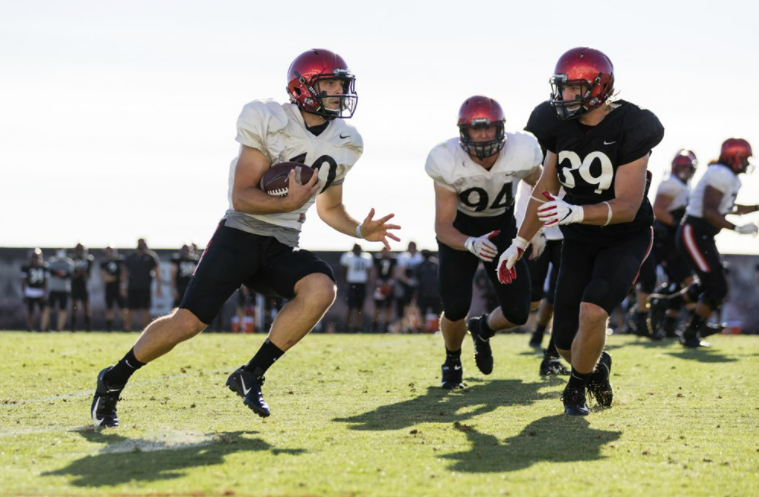 For the first time since Nov. 30, 2019, San Diego State football will have fans in the stands for a home game — even though it’s 113 miles away from the last place they had an actual home crowd.

Dignity Health Park in Carson, California will be the site of the Aztecs opening game against the New Mexico State Aggies (0-1) on Saturday, Sept. 4, and can be seen on CBS Sports Network at 7:30 p.m.

It’ll be the first time these teams have faced each other since Sept. 14, 2019. That game in Albuquerque featured a fierce rushing attack from the Aztecs with then-sophomore running backs Jordan Byrd and Chance Bell combining for 39 carries for 234 yards — six yards per carry — and three touchdowns as the Scarlet and Black walked away with a 31-10 victory.

That was two years ago, however, and The Aggies have an entirely new team under head coach Doug Martin who is in his eighth season at NMSU. The Aggies have already played their first game in 2021, getting walloped by the University of Texas El Paso Miners 30-3 on Sat., Aug. 28.

The Aggies offense is pretty conventional. They often play with no less than three wide receivers on the field, while often getting into four-receiver sets. Their recent loss to UTEP utilized a balanced run-to-pass ratio, running 34 run plays while also making 33 pass attempts. This is due to the versatility of their dual-threat quarterback — junior Jonah Johnson — who can be found throwing and running the ball in any situation.

“Defensively, we’ve got to do a great job versus the run,” Hoke said. “Even though coach (Doug) Martin likes to throw it around a little bit.”

The offense of UNMS is led by Johnson, who completed just nine of his 24 pass attempts against UTEP, while giving up two interceptions and gaining just 82 yards through the air. Redshirt freshman quarterback Weston Eget also got playing time versus the Miners, completing one of his nine pass attempts for seven yards. The longest completion from the two quarterbacks was just 16 yards.

Four Aggies received two passes against UTEP with none of them eclipsing more than 31 yards receiving. A controversial non-call in the start of the second quarter cost NMSU a passing touchdown, when junior wide receiver Dominic Gicinto snagged a 15-yard pass from Johnson in the back of the endzone getting his toe down inbounds. The ruling on the field was an incomplete pass and the officials didn’t see enough evidence to overrule the call on the field. The Aggies settled for a field goal three plays later.

Five players had a rushing attempt last week for the Aggies and combined for 101 yards on 34 attempts — three yards per carry. Redshirt freshman Juwaun Price and junior O’Maury Samuels led the charge with nine carries each for a combined 65 yards. Behind them was the quarterback Johnson, who ran the ball twelve times, gaining 31 yards — losing 15 yards on two sacks — while coughing up a fumble in the first quarter. Weston also ran the ball three times for 13 yards. The quarterbacks got many of their rush attempts off of read-option plays and scrambles out of the shotgun.

The New Mexico State defense runs a 4-4-3 defense and likes to send five defenders at the line of scrimmage. They were also seen running a Nickel defense against a four-wide receiver set, as well as a 3-4-4 cover two with the corners in press coverage. NMSU gave up 452 total offensive yards — 249 passing yards and 203 rushing — and 30 points against UTEP.  The Aggies weren’t able to get the Miner’s quarterback but did snatch two interceptions in the defeat.

Leading the Aggie defense on Saturday was junior linebacker Trevor Brohard who had 11 tackles with one tackle for loss. Behind him was freshman linebacker Joshua Ferguson who had eight tackles with two TFL’s. Sophomore linebacker Dalton Bowels — seven tackles versus UTEP — and junior defensive back D.J. McCullough each had one interception against the Miners.

Overall: NMSU is searching for their first fall victory since Nov. 23, 2019 — they won a game this past winter against Dixie State — and are searching for their first road victory since Sept. 22, 2018. The Aggies have combined to go 6-20 since their 2018 season, haven’t played a full season since 2019 and just got blown out at home in which their on-field play showed a lack of discipline in fundamental football. On paper, this game should be an easy victory for the Aztecs, but amongst all of the negativity surrounding the Aggies, Hoke says there’s still plenty to game plan for against NMSU.

“You look skills-wise offensively at the wide receiver position…and their running backs are both very talented,” Hoke said. “(NMSU) never got in a rhythm offensively, either penalties or fumbling the ball. They never had a chance to get themselves going.”

The Aztecs will also have to prepare for the Aggies physical offensive line, who only allowed three sacks against UTEP, and created lanes for runners on a regular basis. The threat of a strong o-line makes Johnson that much more lethal, giving the dual-threat quarterback time in the pocket to pass or scramble, as well as creating lanes for him on read-option plays.

The game plan for the Aztecs heading into week one is a simple one, but Hoke says his biggest emphasis of play this week will be with special teams.

“Special teams are going to be critical,” Hoke said. “I can’t tell you how many first games are lost because of poor special teams. So that has been a big emphasis for us.”