Three adjustments SDSU football can make for the 2021 season 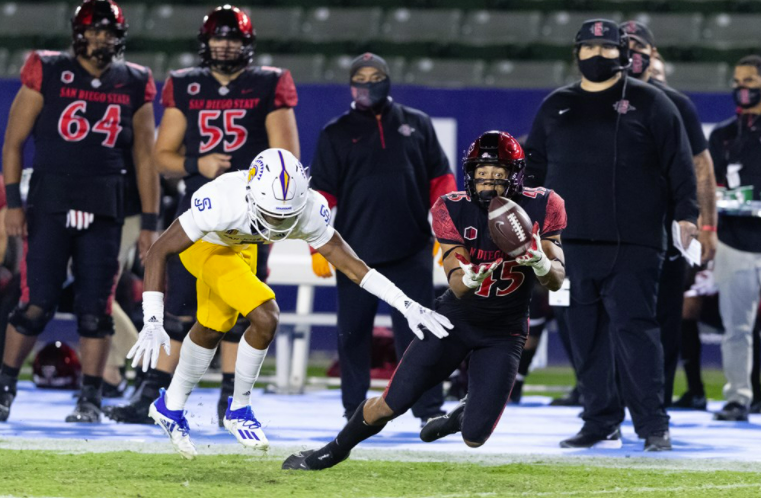 The unorthodox 2020 football season is now in the rearview mirror and many teams are excited for things to get back to normal. The San Diego State football program is no exception. After what many consider to be a disappointing season, the Aztecs (4-4) get a fresh start in 2021 with an 11-game schedule that includes two Pac-12 opponents and seven Mountain West Conference games.

Although it’s best to leave the past in the past, the Aztecs would be remiss if they didn’t take anything away from what ultimately was an underwhelming 2020 season. With a full slate of games in 2021, here are some things the Scarlet and Black can look to fix from their 2020 season.

Scoring in the second half

The Aztecs had opportunities to win in every loss in 2020, but the lack of second-half scoring proved costly. The Aztecs averaged an abysmal 1.5 points per game in their final four games combined, failing to score second-half points in three of the four games to end their season.

With the Scarlet and Black’s always intimidating and aggressive defense, if the offense were able to produce points in all four quarters in each football game, they could become one of the front-runners in the MWC 2021.

SDSU football has always been known for its explosive rushing attack with running backs like Donell Pumphrey, Rashaad Penny and current powerhouse running backs like senior Greg Bell. In years past, the passing attack has taken a back-seat to the fierce rushing attack, but the Scarlet and Black’s pass offense could use a real revamp if the offense wants to stay competitive in the MWC.

The Aztecs used three quarterbacks in 2020, none of which were able to solidify themselves as the starter. The trio tallied six total touchdowns and threw five interceptions in eight games in 2020, with an average completion percentage of 56.65%.

Four game starter Carson Baker transferred to Western Kentucky in May, leaving returning seniors Lucas Johnson and Jordon Brookshire, along with Mississippi State transfer Jalen Mayden, as the frontrunners for the starting role in 2021. Junior Baylor Horning, alongside promising freshmen Will Haskell and Marshall Eucker, are in the quarterback mix as well.

Play up to competition

SDSU ended up with a point differential of 55 points despite winning only half of their games. This was thanks to three blowout victories in the Aztecs’ first four games, outscoring UNLV, Utah State and Hawaii by a whopping 73 points combined — averaging a 24.3 point lead per game. The Scarlet and Black won every game against teams with a worse record and point differential than them by more than a touchdown. Teams that the Aztecs defeated combined for a record of 7-18 in 2020.

The Aztecs made it clear they didn’t belong with the bottom-feeders of the MWC, but always failed to rise to the occasion against conference leaders, falling to San Jose State (7-1, 6-0 MWC) and Nevada (7-2, 6-2 MWC). The Scarlet and Black fell also to higher-ranked non-conference opponents that would have given the Aztecs some clout in the NCAA rankings, falling to Pac-12 opponent Colorado, and the AP Poll number 11 ranked BYU at the end of the season. Teams that defeated the Aztecs in 2020 finished with a combined 28-6 record.

The good news for SDSU football is that their losses to these tougher opponents weren’t blowouts — similar to what they’d dish up to lesser teams — but if the Aztecs want to be a top dog in the conference and in the country, they are going to have to win some big games along with the favorable ones.

The Aztecs are scheduled to face the stiff competition of the MWC in reigning conference championships Boise State, rematches against SJSU and Nevada, and rival Fresno State. The Scarlet and Black also take on Pac-12 opponents Arizona and Utah.