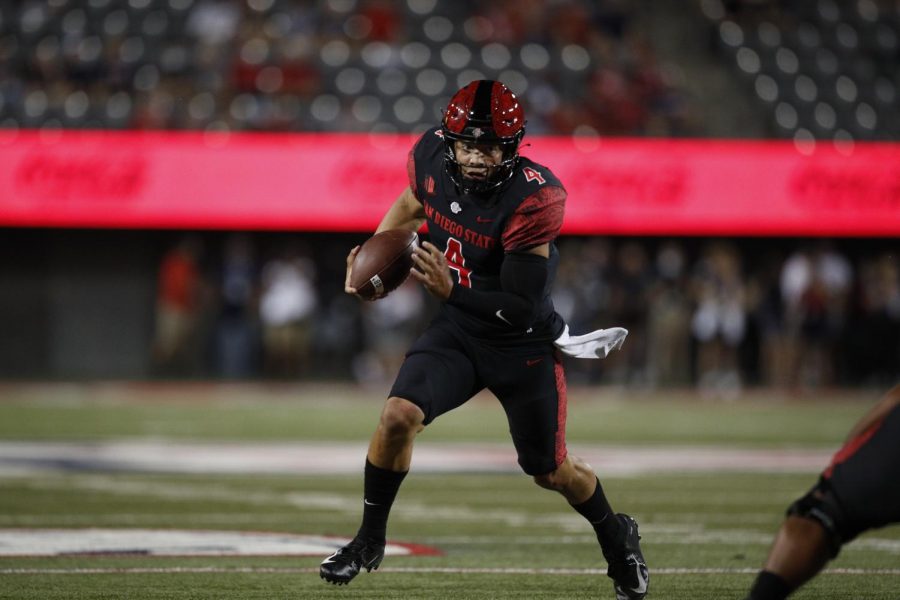 After an explosive start, San Diego State football was able to crush the Pac-12’s Arizona Wildcats at Arizona Stadium. With a heavy dose of run game, the Aztecs (2-0) were dominant over the Wildcats (0-2) all game in a 38-14 victory.

Following a game where he recorded his career-high in rushing yards, senior running back Greg Bell exploded for another big running game. Bell had 125 yards on only 17 carries and set the tone with a 55-yard rushing touchdown on the second play of the game.

Other rushers such as senior running backs Chance Bell and Kaegun Williams also provided valuable yards which gave the Aztecs 271 total rushing yards on the night.

After the game, Bell credited a lot of his success to his offensive line.

“My O-line looked great tonight,” Bell said. “They looked great last week. They opened up a lot of holes tonight and we got the victory.”

Led by the team’s commanding rushing attack, the Aztecs were able to put up 35 points in the first half. Just like the running game, the team was also able to be explosive through the air as well.

Senior quarterback Jordan Brookshire — who seemed much more confident than last game — went 10 for 15 for 183 yards and two touchdowns, while spreading the field for the Aztecs. Brookshire connected with senior tight end Daniel Bellinger three times for 113 yards, including a 25-yard touchdown.

When asked about how he was able to improve his game from last week with New Mexico State, Brookshire explained further.

“I think it’s more getting comfortable and being prepared for the game,” Brookside said. “Not that I wasn’t prepared for last week’s game, but I just felt more confident in this week’s game. I got a lot of supporters behind me saying pick it up. Having a lot of people with you backing you up makes it a lot easier.”

Not only did the Aztecs excel on offense, but they also did great work on the defensive side of the ball. The Aztecs defense only allowed seven points to a talented Wildcat offense.

SDSU shut down the run by allowing only 49 rushing yards the whole day while the front seven got to the quarterback with ease. They put constant pressure on redshirt freshman quarterback Gunner Cruz, making him uncomfortable in the pocket. This resulted in the SDSU secondary playing with confidence. Junior safety Patrick McMorris snagged his first career interception in the third quarter and was able to return it 16-yards

While the Aztecs improved how they started the game from last week, they were unable to do much offensively in the second half. The team’s defense did a great job of maintaining control of the Arizona offense, but the Aztecs will have to do a better job of keeping their foot on the throttle. Head coach Brady Hoke says he was pleased with what he saw in the first half, but would have liked to have seen more in the last half of the game.

While the Aztecs improved how they started the game from last week, they were unable to do much offensively in the second half. The team’s defense did a great job of maintaining control of the Wildcat’s offense, but the Aztecs must do a better job of keeping their foot on the throttle.

Alongside the team’s strong game on both sides of the ball, the Aztecs’ special teams were also outstanding. Junior Tyrell Shavers returned a blocked punt for a touchdown in the first quarter, which helped set the tone for the rest of the game.

After defeating a Pac-12 team, the Aztecs will hope to do the same thing next week against the Utah Utes (1-1), The Utes are coming off of a tough loss to BYU and the Aztecs will look to go 2-0 in their temporary home stadium in Carson, California and 3-0 on the season.

The team finished the game with eight penalties, giving up 84 free yards because of it. This is unacceptable if the Aztecs want to uphold their success and remain one of the best teams in the Mountain West Conference.

“Speaking of discipline, I really need to have a good talk with our football team because we had too many penalties,” Hoke said. “We have to respond better at times, but from that standpoint, we will take care of that and move forward.”

Through a good week of practice, the Aztecs will hope to clean up their mistakes and record their second straight win against a Pac-12 team.