Court is in session for Mock Trial Club 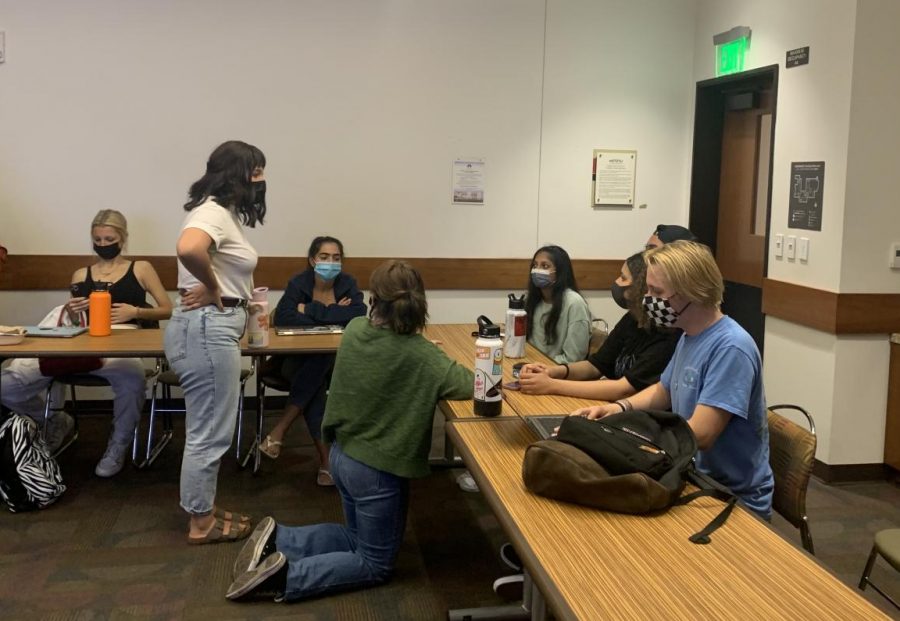 The president of Mock Trial, Sophie Jeltema (in white), talking to new members during the first meeting in person.

After a year of gathering virtually, student organizations finally have the chance to reunite in person. The Mock Trial club is experiencing this firsthand as members meet every Monday over Zoom and Wednesday in person to prepare for the semester.

Competing in mock trials requires a lot of work and can seem like a hassle, but the Mock Trial club at SDSU is different. It’s a diverse group of individuals making those who join feel welcomed and supported with a common goal in mind.

The first couple of meetings can be a little intense. Being in person again allows students to experience Mock Trial at its fullest.

The vice president of recruitment, Cate Oveson, a third year sociology major, said she knew this year will be better.

“It was definitely a little strange meeting everyone virtually rather than in person. I can’t say how the experience for a newbie this year while we’re in person,” Oveson said. “I will say that in-person meetings so far, I do think it’s a lot more fun to meet people in person. I think with clubs like mock trial it is generally a better experience to do stuff like that in person.”

The teams for this year have been slightly tweaked than in previous years. In the past if you auditioned, the club would split people up into two teams: witnesses and attorneys. Mock Trial Club President Sophie Jeltema, a senior studying in political science and philosophy, noted that there’s an additional team this year but anyone can have their time to shine.

“We have three teams this year, the third team will not be competing and will just be alternates. So they’ll fill in when someone can’t make it or if people drop the club. That’s how you get involved,” Jeltema said.

Joining this club is a process, but it’s not impossible. There’s an audition, where students prepare an opening statement, a theory of a case and few other things to present to the executive board. Students are notified if they are accepted and during the first meeting, roles will be assigned.

After all that is established, it’s time to actually get to work. Mock Trial is all about teamwork while getting courtroom experience. These competitions enable people to discover their strengths, and explore new avenues for themselves. Many find themselves learning skills like how to write opening and closing statements, courtroom etiquette, competition scoring and public speaking.

Each meeting, members prepare and study the court case that is assigned for the year so when competition comes around in November the teams are prepared to face other schools. Their first competition will be hosted virtually by UC San Diego.

It may seem intimidating at first but the experience and the people make it all worth it. Caili Anderson, a political science junior minoring in sociology and marketing, joined as a freshman and made her way to become the vice president of communications this year. When Anderson came to SDSU, she looked up the club’s website, saw them tabling and decided to get involved. She said she doesn’t regret it one bit.

“Mock Trial is just really fun, I made so many friends because of it,” Anderson said. “You would think you wouldn’t, while coming into it. I was like everyone thinks Mock Trial is this nerdy club and all these nerds but everyone is really cool.”

For these members, mock trials are an opportunity to learn new things, to better oneself and to meet all different kinds of people interested in one common goal: to win a competition.

“The team aspect of it. I love working with everyone in Mock Trial. We’ve always been a really strong team,” Jeltema said. “Both in court and as a group in general, it’s always been really easy to get along with everyone, we’re all like-minded individuals who all have the same goal.”   Even though auditions have already passed, they are always welcoming new members.  Every Wednesday at 7 p.m. they hold in-person meetings in the Metztli suite in the Aztec Student Union. Check out their Instagram @sdsumocktrial for more information.