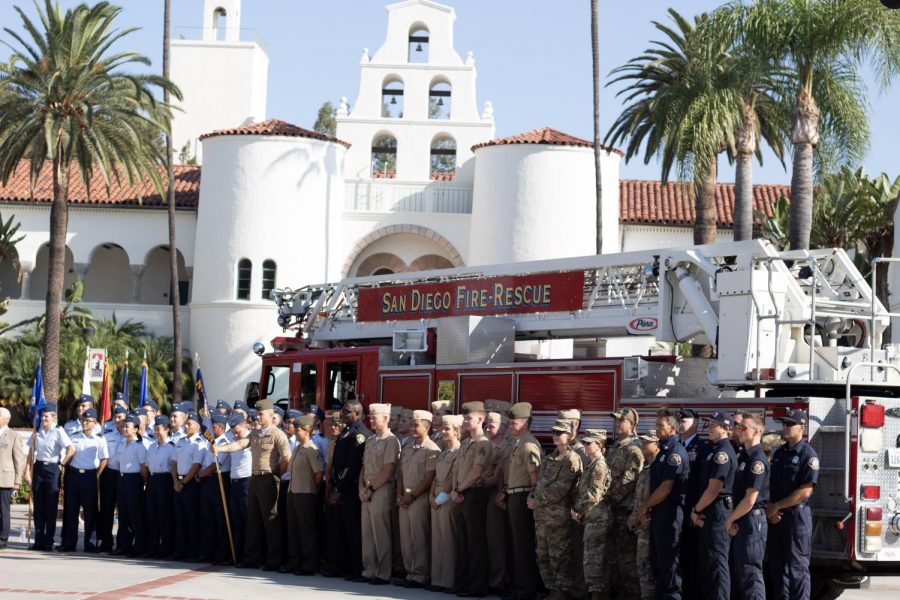 Service members and staff honor and remember the innocent lives taken on Sept. 11, 20 years ago.

On Monday, Sept. 13, San Diego State held a remembrance ceremony for the Sept. 11, 2001  attacks by the flagpole in Campanile Walkway in front of Hepner Hall. This ceremony marked 20 years since the 9/11 terrorist attacks at the World Trade Center in New York City.

The SDSU Army, Navy and Air Force Reserves Office Training Corps hosted the memorial, and those who attended showed their respect to the fallen heroes and victims of the 9/11 attacks.  The San Diego Police Department, SD Fire Department, and the U.S. Armed Forces attended the event saluting to the lives taken away during the attacks 20 years ago.

This event included a salute to the nation with the national anthem and a moment of silence at 8:46 a.m. to commemorate the time when the North Tower of the World Trade Center Complex was attacked. A bell also rang 20 times to acknowledge each year that has passed.

SDSU students, faculty and staff attended the event, listening to the words of San Diego first responders and university President Adela de la Torre about the significance of remembering such an important event in modern U.S. history.

“Most of our first-year students, the sophomores and the juniors passing through Hepner Hall have never known a time without this war,” de la Torre said. “They have never known a time without 9/11 and without the terror and anxiety it created in our lives and in the lives of their families. But this is also a day to remember our great strength as a diverse nation. To remember how much good we have done and how much we have grown. “

Keynote speaker SDPD Captain Christopher Knighten recounted his experiences back to the day of the 9/11 attacks, and how it seemed impossible that this was an act of terror happening upon our country at that time.

The event brought together the San Diego military community to reflect upon the events that made an impact on the nation.

Military and Veterans Administrator at SDSU’s ROTC program Elisa East attended the event to pay her respects to first responders and volunteers that risked their lives during the attacks.

“The promise of never forgetting still stands strong in our military community,” East said. “As a veteran myself, I appreciate that our mission is still being honored by those we love.”

U.S. Navy Commanding Officer Capt. Gerald Olin attended the memorial service along with other military personnel as he said this event signifies the importance of his work.

“It is important to never forget so we don’t see similar things happen in the future,” Olin said. “It’s a dangerous world, sometimes a hateful world, and we have to remember past events to prevent any recurrence in the future.”

The event ended with a memorable flag lowering to half mast honoring the lives taken due to the attacks, with a military bugler playing the memorable military funeral bugle call, Taps.