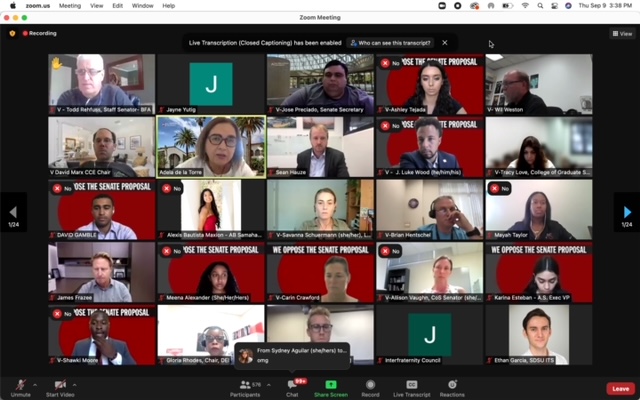 The meeting was held over Zoom and was open to all students, although students who weren’t Associated Students executives were not allowed to speak during the meeting unless time was yielded to them.

The proposal, authored by Cezar Ornatowski, a professor in the College of Arts and Letters, was intended to give faculty autonomy over the format of their fall classes, without the need of the dean or assistant dean’s approval.

The proposal cited a rise of COVID-19 cases across the country, the Delta variant, the decreasing efficacy of the vaccine and the potential of “long COVID” [long term COVID-19 symptoms] as some of the reasoning for the proposal.

A.S. posted a public invite on their Instagram to the meeting detailing the proposal, which was met with hundreds of negative comments calling for a drop in tuition and claiming students would no longer attend SDSU should the proposal pass.

“Then the expectation is that out-of-state tuition will be refunded back,” her comment read. “To pay over 20k a year for online instruction is absurd. To also have this after the drop deadline is suspect at best. These kids already have a vaccination rate of 95 percent and they have to wear masks inside. The mental well-being of these kids have to be taken into consideration.”

The proposal comes just one week after the official add/drop deadline for classes, meaning if students wished to no longer take a class once moved online, they must file a petition with the Registrar’s Office and will receive a W (withdrawal) in the class which would not affect their GPA.

One student commented, “I hope to be in person but I feel bad for my elderly professors who are too scared to even take a sip of water in class due to COVID.”

A.S. also made a second post stating they were opposed to the proposal. The posted memorandum cited equity gaps for low-income students forced online, mental health strain on students, a greater health and safety risk for students due to “a lack of structured, social academic spaces” as well as the high vaccination rate on campus as reasons for their opposition.

“Allowing this resolution to pass would insinuate a disregard for not just process and genuine justification, but for consideration and respect of student commitment to their promised in-person education while health guidelines allow,” the memorandum read.

Additionally, the memorandum also stated faculty were given the chance to apply for accommodations to teach virtually before the school year began and the university granted exceptions to all 150 individuals who applied.

Dr. Pamela Lach, the Digital Humanities Librarian and DH Center Director, read aloud the library staff’s letter of dissent which focused on the lack of support for other non-teaching faculty and staff.

“Had the University developed a contingency plan for unexpected surges, such as delaying the start of in-person classes due to the Delta variant, classroom safety and course modalities could have been addressed in a uniform way that would minimize confusion and center the well-being of all members of our community,” the letter stated.

The Inclusion Council also presented a letter of dissent at the meeting which cited inequity between students should classes be moved online as their reason for disagreement.

“Although we appreciate that many faculty question whether it is fully safe to return to face-to-face instruction, allowing faculty to change their course modality without oversight (or even input) from any other institutional party is likely to cause great disruption for students,” the letter read. “The negative impact is likely to be disproportionately greater for students from less privileged backgrounds.”

Voting members on the University Affairs committee were then given a chance to speak either for or against the resolution.

A majority of the opinions expressed both through the live video and chat functions of the Zoom room were against the resolution.

Senate members expressed concerns about students’ mental health, the loss of earned benefits for students of military families and the unhealthy lack of structure the resolution could create.

“We have a robust set of preventive practices in place,” Skiles said. “These techniques are working and our students are collectively endeavoring to uphold what we have asked of them.”

Skiles also cited “low and stable” cases on campus and a lack of transmission in research and instructional settings.

“We have not seen transmission from students to employees and the majority of our employee cases have been subsequent to exposure within their personal lives, not subsequent to their work at the university,” she said.

After voting members were given a chance to express their opinions publicly, a roll-call vote was taken.

The resolution failed with a vote of two for and 77 against. Nearly 500 other non-voting members were also present.

After the meeting, Tejada told The Daily Aztec she was satisfied with the outcome of the vote.

“I think that seeing (the resolution) on the senate floor was incredibly disheartening due to the privilege that it gave faculty specifically with no regard for students,” Tejada said. “So I was very satisfied with the outcome. The student voice was taken into consideration and I was also very appreciative of all the speakers coming from different identities and organizations on campus that were able to fully represent the student voice and student needs in that situation.”

To read the entirety of the proposal and the letters written against it, click here.