Professors put the pedal to the metal 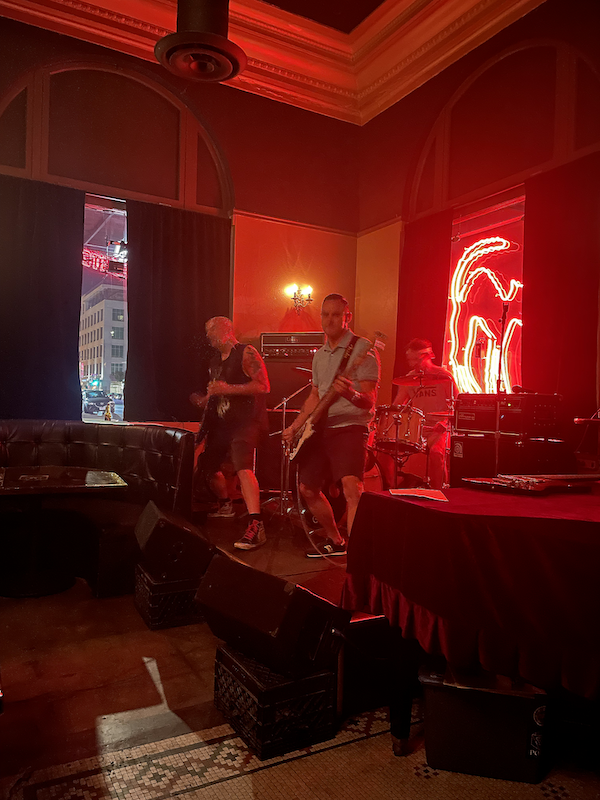 CANDLE$ performing at the Black Cat Bar in City Heights in front of a lively crowd of metal fans on Sept. 18.

Students may think their professors lead boring, clean-cut lives without much substance other than grading papers and giving long-winded lectures. However, criminal justice professors Paul Kaplan and David Jancsics break that stereotypical mold.

Together, they are one-half of CANDLE$, an explosive heavy metal band formed during the early stages of the COVID-19 pandemic. The band is rounded out by lead vocalist Devyn Randolph—a veteran of multiple Boston hardcore bands—and Ukrainian drummer Stanislov Khomyn who was part of progressive metal band Replicated Foundation in Kiev.

Before pursuing a degree in his native country Hungary, Jancsics played bass guitar in the ‘90s for Leukemia, an essential piece of the Hungarian hardcore scene. In the same decade, Kaplan had been playing bass for a few hardcore bands in San Francisco before going to graduate school and eventually earning his P.h.D. from UC Irvine.

The two first met through a mutual colleague who mentioned Jancsics’ musical past in Budapest. From there, the two bonded over their adoration for the avant-garde metal band Neurosis, whom Leukemia played with and Kaplan has a large tattoo of.

“It was last summer in the middle of COVID, so we were very happy to do something together and just jam,” Jancsics said.

Once they began jamming together, everything clicked, and soon all their practicing inspired them to start a group.

Both are natural bass players but Kaplan picked up the baritone guitar for CANDLE$. A while back, Kaplan sent out an ad to help fill out the rest of the positions in the band. A year ago they found their drummer, and three months ago they finally paired up with a vocalist. With all of their time spent playing in different sections of the world, their music creates an international vibe that encompasses their experiences.

As veterans of the music industry, Kaplan and Jancsics were able to pick up where they left off and find a great project to pursue in their free time.

“It’s a fun way to blow off energy. We work really hard, we work constantly on research and teaching at the university, so this is a really fun way for us to get back to our punk and metal roots and have fun,” Kaplan said.

Jancsics barely touched his prized instrument before leaving Hungary and it had been over a decade since either of them have performed live. The two said jump-starting their musical ambitions again was something neither had mapped out.

“I never imagined that I was going to be onstage again because the last time was fifteen years and that was already a reunion show in Hungary,” Jancsics said.

Before CANDLE$ started, Kaplan kept practicing regularly and has even incorporated music into his curriculum. He brings up the murderous and sadistic activities of Norwegian black metal band Mayhem in his criminology class and also discusses the criminal subculture within music, including how some artists are being prosecuted with their song lyrics used as evidence.

Even though some students may not have any interest in their professor’s personal lives, Kaplan said sharing their passions and hobbies can make them more relatable.

“I think sometimes students relate to it and you sort of become humanized so you’re not just seen as a robot up there dispensing data,” Kaplan said.

CANDLE$ played their first gig as an opener for Dream Burglar at the Black Cat Bar on Sept. 18. They’re planning on recording their music soon and hope to use their musical connections in San Francisco and Hungary to set up shows on multiple continents.

Despite their big ambitions, Kaplan said for now playing with CANDLE$ is just a really great hobby and it’s been a lot of fun so far.