Column: Aztec fans pack the stands for the second Pac-12 win of the season 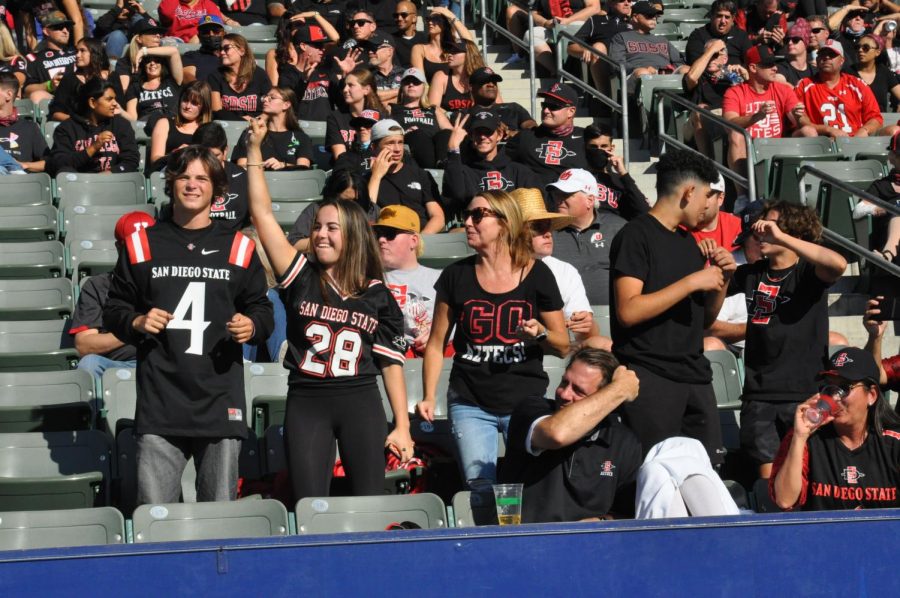 The SDSU Football program has adjusted to their new home for game days at Dignity Health Sports Park in Carson, California and Aztec fans have followed suit, showing up in numbers for Saturday’s blackout match-up against the Utah Utes.

In a game week press conference leading up to the nonconference Pac-12 match-up, head coach Brady Hoke discussed the importance of fans to show up and support the Aztecs.

“We need Aztec Nation,” Hoke said. “We need everyone that we can get that bleeds red and black up to Carson because it’s going to be a heck of a football game.”

The Aztec loyal did just that, showing up hours in advance — sporting their black Aztec jerseys from a previous giveaway —to experience a full game day.

With the 4 p.m. kickoff, fans spent the early afternoon in the tailgating lots as well as exploring Aztec Village, a free pregame environment open to the public with giveaways, food trucks, a DJ and a Kids Zone.

Sophomore Annalissa Alvarez attended her first Aztec football game as a student after missing games through her freshman year due to the COVID-19 game day policy of no fans.

“The energy in the student section was absolutely amazing,” Alvarez said. “This was my first time attending a game as a student at SDSU and in the student section. The constant hype and lively energy made the game so much better than it already was. When we went into overtime, everyone was going absolutely crazy and you could feel the love and support for the boys.”

Alvarez grew up in San Diego attending games with her family at SDCCU Stadium — the long-time home for the Aztecs. While Dignity Health Sports Park is serving as a temporary home for SDSU football, Alvarez recalled similar energy in Carson.

“Although it isn’t our true ‘home field’ in Carson, the energy and school spirit were still there,” Alvarez said. “The field in Carson feels just like our old stadium back home. I think they did a great job by making the atmosphere feel like we are still in San Diego.”

Whether it was current students, families of students or athletes, or alumni, fans showed their Aztec spirit for the blackout themed game and cheered the team on to victory in triple overtime.

The Scarlet and Black defeated the Utah Utes 33-31 with back and forth, repetitive overtime scoring attempts.

To claim your upcoming game tickets and student bus passes to cheer on the undefeated Aztecs, visit GoAztecs.com/StudentTix.