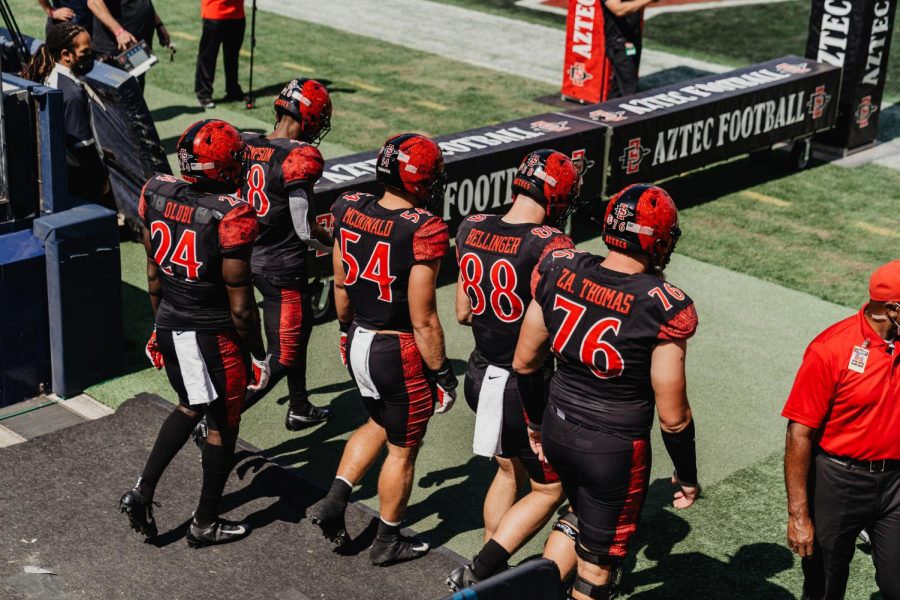 San Diego State football captains walk out before the game for the coin toss.

They did it without senior running back Greg Bell or senior defensive back Tayler Hawkins — a testament to the team’s depth and resilience.

After Bell left with an injury in the first quarter, three Aztec running backs finished with over 70 rushing yards and combined for four touchdowns as SDSU torched the Towson Tigers (1-3) 48-21 at Dignity Health Sports Park in Carson.

After the game, head coach Brady Hoke noted while his team was sluggish out of the gate, they were able to respond well in the victory.

“I think when you look at Towson (University), they’re a good football team. And they’ve got some very good players and they’re well-coached,” Hoke said. “I thought we were a little sluggish, not bad, but a little bit to start the football game, but I like how we responded.”

For a moment, it seemed like the Tigers were brewing an upset as the Aztecs stalled out of the gate. Graduate quarterback Chris Ferguson — after completing a 49-yard pass to junior receiver Daniel Thompson IV— led his team to the endzone on a 19-yard dump pass to graduate running back Jerry Howard Jr.

But SDSU didn’t falter or panic when the senior back went down. Instead, a three-man tag team of seniors Chance Bell, Kaegun Williams and Jordan Byrd trampled the Tigers to the tune of 230 combined yards.

Despite gaining 51 yards of offense in the first quarter, the Scarlet and Black still tied the game on a six-yard touchdown by Williams.

In regards to his team’s performance in the first quarter, Hoke’s message to his team was simple: play better.

“You know, it’s part of getting your team and kicking them in the butt and going out and playing the way they’re capable,” Hoke said.

SDSU roared to life in the second quarter with an 11-play, 90-yard drive capped off by senior running back Jordan Byrd who bounced outside and dove past the pylon for a 12-yard score.

The following drive, senior quarterback Lucas Johnson — starting for a second consecutive time after fellow senior Jordan Brookshire’s injury — threw an impressive fade pass to senior receiver Elijah Kothe in the back of the end zone.

It also helps that the defense — after some quick adjustments — ground Towson’s offense to a near halt. Senior defensive lineman Jonah Tavai and junior lineman Cameron Thomas had a sack apiece while the defense as a whole had seven tackles for loss along with five quarterback hurries.

Junior safety Patrick McMorris — who led the team with eight total tackles — said his defense played like Aztecs in the second half after a slow start.

Without Hawkins patrolling the secondary, it was up to a pair of freshmen in Noah Avinger and Noah Tumblin to shut down the Tigers’ receivers.

And what a job they did.

Tumblin was second on the team in tackles with four while Avinger posted three tackles, a pass break up and snagged a one-handed interception — likely an early contender for play of the year for SDSU football.

The freshman defensive back’s play caught the attention of the senior DB. After the game, McMorris praised both the freshmen and the secondary for their performances.

“I felt like Noah Avinger and Noah Tumblin came out and did what they had to do,” McMorris said. “Avinger had a pick, it was very crucial. It was a great pick too. I just felt like as a DB and as a DB room, we came in and played fast.

Byrd’s 55-yard touchdown run.— his fourth touchdown in four games — a 48-yard field goal by Matt Araiza, Chance Bell’s 61-yard dash and ensuing one-yard touchdown all but assured Towson was not getting back into the game

A running back by committee is certainly a possibility, especially if Greg Bell continues to be slowed down by injuries.

“Greg’s a great athlete and we’re definitely going to need him for the long haul so it was tough kind of seeing that,” Chance Bell said. “(But) like we preach around here, it’s always next man up you know. You never know what you do, your role can change in one play.”

The Aztecs couldn’t have asked for a better start, especially with how the rest of the Mountain West Conference is shaping up. Fresno State is ranked No. 18 by the Associated Press and is 4-1 in the West Division while Wyoming — in the Mountain Division — has also started off 4-0.

All of a sudden, that 4-0 start just became a lot more important.

Thankfully for SDSU, their bye week has come up at the most convenient of times. The Aztecs will be off this week before returning to Carson to begin conference play against the New Mexico Lobos (2-2).

Jayden Hanzy contributed to this report.