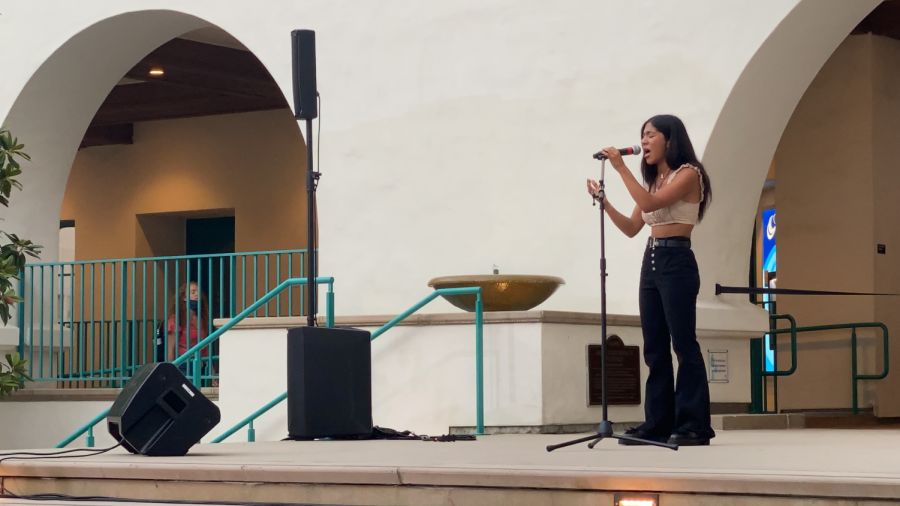 Masks were not required because it was outside.

The audience was asked to vote for the best performances of the night. They picked Spanish singing duo Manuel Montalvo and Larissa Vazquez for first place. Both Montalvo and Vazquez are seniors at SDSU and Montalvo’s majoring in mechanical engineering while Vazquez studies child development, according to Montalvo and Vazquez respectively.

In second and third place were Louisa Oldeland, a freshman studying film production and Joe Dreamz,who does not attend SDSU.

Lindsay Scholbrock is the music and entertainment chair for Associated Students and explained why she enjoyed attending the event.

“I love to see students support each other,” Scholbrock said.

She said she was happy about the performances and the turnout. According to her, the performers chosen were also really diverse.

Barry Macasling Lomibao Jr., better known as “Barry Mac on the track,” was the first performer of the night. Lomibao is a junior whose major is music recording technology and audio design.

Lomibao performed a few original songs he produced and freestyle on already popular beats. Some of the songs can be found on the artists’ SoundCloud under the username @BARRY MAC.

“Some of the lyrics are inspired by my favorite artists like Nas, he said ‘sleep is the cousin of death,’” Lomibao said.

Lomibao also debuted a song called “Units” at the event. “Units” started off as a class project, Lomibao said. The song is directed towards the CSU and the way it has impacted Lomibao’s finances.

Lomibao said he was nervous all day before the performance and the competition was tough, but the crowd was pretty engaged. Lomibao identifies as Filipino and Japanese-American, and was born in San Diego before moving to Virginia for four years. His return to San Diego led to his time at Eastlake High School where he joined a band after being inspired by poetry.

He started developing beats and rhyme skills. Lomibao said no matter what he’s doing, he simply wants to tell a story, and is excited for upcoming projects he’s yet to post about on his Instagram @bmchord.

The night featured many musical performances from students but also from performers who do not attend SDSU, like Joseph “Joe Dreamz” Harrison. Harrison shouted out Hispanic Heritage Month right before his set.

Harrison performed five songs. His fourth song, “Made it Out”, told the story of how the COVID-19 pandemic affected him personally. While on stage, he stepped on a face mask and by the end of his last song, he jumped off the steps of the union into the crowd.

“If you hear my voice, congratulations, let’s have a toast for the ones that didn’t make it,” Harrison sang on “Made it Out”,  “And make some noise for the people on the frontlines, I can’t wait to wear this mask for the last time.”

Harrison made several references to God in his songs. According to Harrison, he was born and raised in the church and his faith is a crucial part of his identity.

Another one of his desires is to inspire others to shoot for their dreams through the use of hip-hop.

Students walking along one of the union hallways stopped to listen to Harrison’s verses, and bobbed their heads with enthusiasm at the lyrics of his song “Know My Name.”

“I want them to remember me for centuries,” Harrison said, alluding to the chorus of a “Fall Out Boy” song.

Harrison claims to have heard about the event from a flyer near a leadership building on campus.

Freshman psychology major Mia Falstad felt she heard about the event right on time. According to Falstad, who has a passion for singing, she hasn’t been able to perform since the pandemic began.

Falstad fought through a few technical difficulties with her cover of the song “Fight Song” by Rachel Platten. Falstad said the event excited her, as did other performers throughout the night.