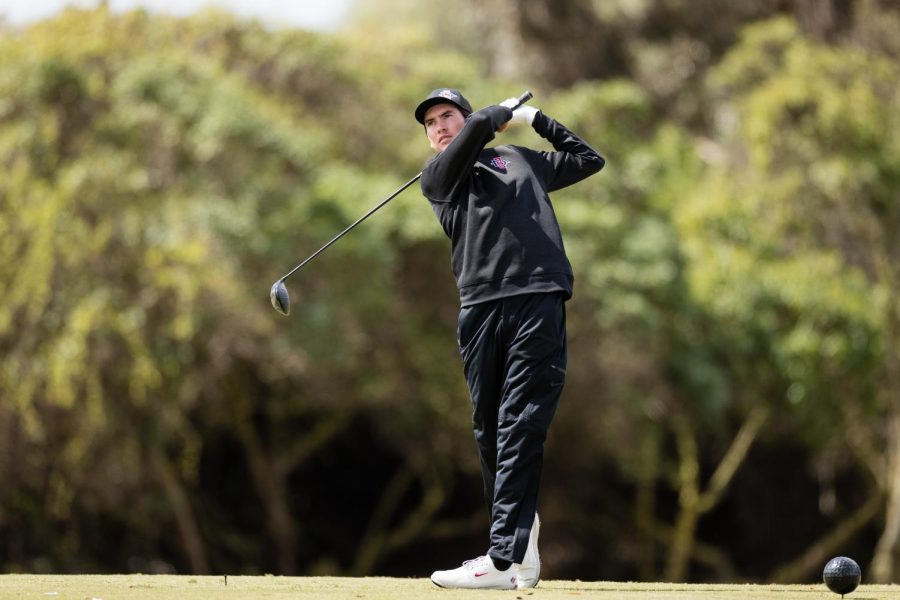 Senior Youssef Guezzale watches the ball after driving it from the fairway. (Courtesy of Derrick Tuskan/SDSU Athletics)

On Sept. 21, the San Diego State men’s golf team finished in a disappointing fashion tying for ninth place at the Husky Invitational.

The event was played at Gold Mountain Golf Club in Bremerton, Wash.— a course that holds significance because the team will return in the spring for the Mountain West Conference Championship.

After a stellar fourth-place finish at the Maui Jim Intercollegiate Tournament, the ninth-place 9-over 873 is a step back, especially considering the 28th ranked Aztecs were one of the favorites — only Washington (21) and Missouri (23) were ranked higher coming into the tournament.

Senior Steve Sugimoto, who finished in a tie for 15th at 3-under 213, said he “felt disappointed” in the team’s final result and that they “expect better of themselves.”

Notable Mountain West competitors Nevada, Boise State and San Jose State all finished in the top five, headlined by the Wolfpack who won the tournament at 18-under 846.

Sugimoto doesn’t feel outmatched by the Mountain West competitors but says that the team will need to “clean up the little mistakes and stay more disciplined” going forward.

For the pivotal return, the Aztecs will need to make an adjustment on their par 3 scoring. The team finished second to last in the field at 21-over on par 3’s. Sugimoto says that Coach Donovan put an extra emphasis on par 3’s after the event. With most of the par 3’s over 200 yards in length, Sugimoto says that saving par is a good thing.

“We just have to do a better job at hitting the green or missing in a safe spot,” Sugimoto said.

Senior Puwit Anupansuebsai also shined on the team this week. Anupansuebsai finished in a tie for 11th at 4-under 212 most notably due to an impressive 4-under 68 on Tuesday, the final day of the tournament. This wasn’t his only highlight of the tournament, as he buried an eagle putt on Monday after driving the green on the par-4 18th hole.

Sugimoto feels mixed with his final result as he finished his final round with a score of 3-over 75. Following 36 holes on Monday, he had prospects of winning as he was tied for fifth heading into the final 18 holes. However, in the final round, Sugimoto says that fatigue set in, resulting in “unforced errors.” Sugimoto will use the finish as a learning lesson as he will “clean it up” and make sure to “eat and drink more water” on the course.

Sophomore Liam Koeneke, in his first career start for the team, finished in 61st at 9-over 225 while freshman Shea Lague finished in 69th at 12-over 228. Sugimoto says that “it is all about experience” and that they are headed in the right direction. His advice for the underclassmen is that they “don’t have to force shots” and avoiding the “big numbers” will be crucial going forward.

The Aztecs will look to get back on track in their next event on Oct. 4 at the Colonial Collegiate Invitational in Fort Worth, Texas. The Colonial is a regular stop for the PGA Tour and the event will be headlined by some of the best teams in the nation. Sugimoto is looking forward to “bouncing back” as well as seeing how the team stacks up against elite competition.