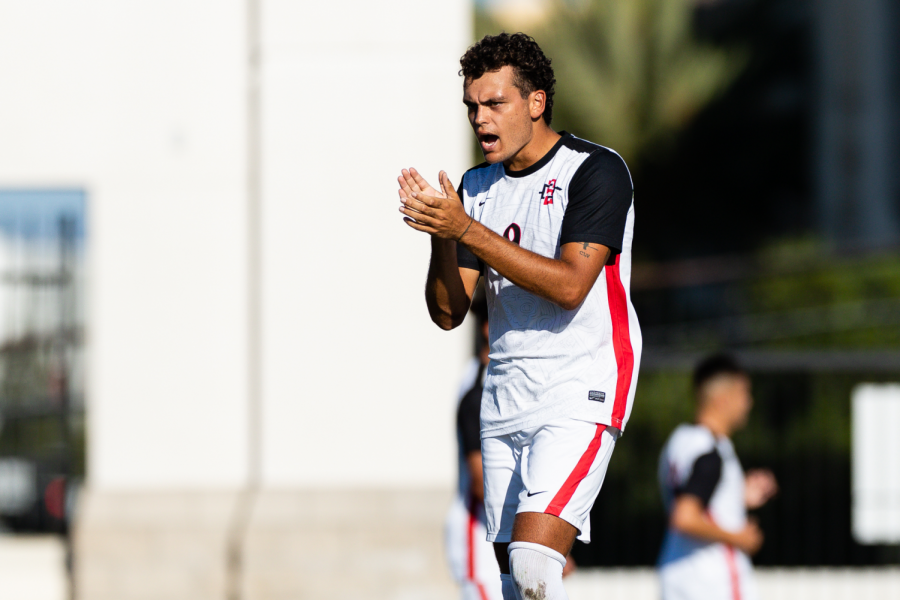 The undefeated streak for San Diego State men’s soccer ended on Thursday night after a controversial non-call handball hit Washington junior Dylan Teves, who scored the golden goal in the first half of overtime in Seattle.

“A tough result against a phenomenal opponent in Washington,” head coach Ryan Hopkins said in a post-match interview. “To play the number two team in the country to basically a standstill on their home field shows the growth of our program and exciting times ahead. In these NCAA tournament-type games, the margins are extremely thin and credit to Washington for executing one more play than us.”

The Huskies would score on a controversial play in the 94th minute of extra time by a right-footed shot from Tevez.

The play started off on a cross that was headed by a Huskie player and appeared to have hit Tevez’s left hand. Main referee Younes Marrakchi made the decision to not call the play a handball and instead blew the game-winning whistle for the Huskies.

SDSU —who entered the night leading the nation in team goals allowed average — passed up just two shots on goal and kept the Huskies under only two goals scored for the first time this season.

This is the first loss of the season for the Aztecs and the first goal they have given up since Sept. 3 against Cal Poly. This is also the first time the Scarlet and Black has trailed all season.

The Aztecs’ first opportunity of the game came midway through the first half when sophomore Iñigo Villaldea found sophomore captain Andrea Ochoa in the middle of the box. Ochoa took a touch and wound it up to strike but the ball was poked away by a Husky defender.

A highlight of the match came a few minutes later after the lights in Husky Soccer Stadium went out, causing a 20-minute delay while power was restored.

Washington outshot SDSU in the first half 7-3 but the Aztecs created more opportunities in the second half and outshot the Huskies 5-4.

The most notable opportunity for the Scarlet and Black came in the 87th minute when junior midfielder Henry Smith-Hastie received a pass from Ochoa and sent a right-footed rocket from 20 yards out that ricocheted off the crossbar, saving Huskies sophomore goalkeeper Sam Fowler from being scored on.

Although the Aztecs couldn’t keep a clean sheet against the Huskies, sophomore goalkeeper Jacob Castro — who was named Pac-12 player of the week — had another phenomenal night for the Aztecs and allowed just his second goal of the season.

“On to another big game and we just have to keep knocking at the door of opportunity and it will eventually open,” Hopkins said in regards to their upcoming match against Oregon State.

The Scarlet and Black now prepare to travel to the state of pine trees to face Oregon State on Sunday, Oct. 3.