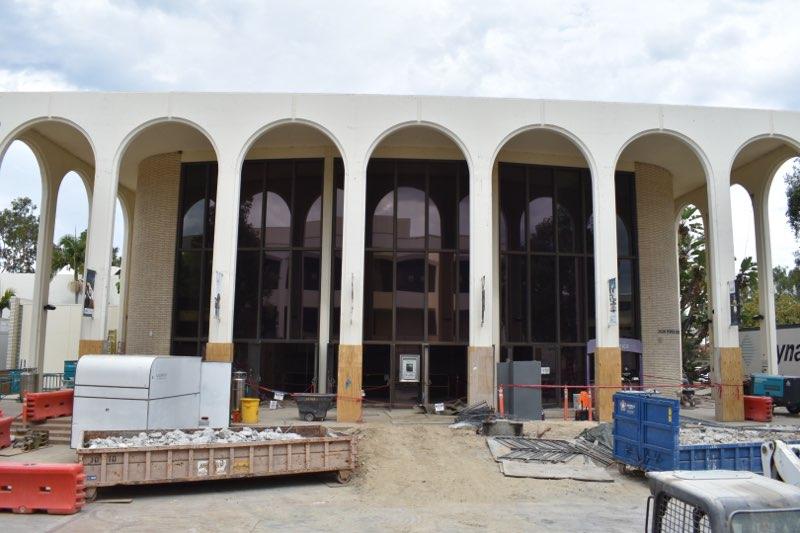 The Conrad Prebys Second Stage Theatre construction is underway and is scheduled for completion in 2023.

The construction of the Conrad Prebys Second Stage Theatre aims to build better facilities for students interested in music, dance, theatre, television and film according to a News Center article. This project will renovate the performing arts district of San Diego State.

Construction began in June of this year and is expected to be completed in early 2023. The budget for this project is $44 million and the name of the stage is dedicated to Conrad Prebys as his foundation granted $6 million to the project. The grant aims to enhance the performing arts district and potentially inspire SDSU students to join or participate in the arts.

‘Niyi Coker Jr., Professor and Director at The School of Theatre, Television and Film said this renovation will offer new opportunities to students since the Prebys Stage will have two separate spaces for students.

“The new stage will be indoors and outdoors, so this will be great for inside performances for dance and theatre, and the outdoor venue will take advantage of San Diego weather to project movies and hold film festivals,” Coker said. “The student organizations will have more spaces to do productions.”

Stephen Zagrodny, a senior studying general theatre at SDSU, said he is excited about the new stage and its benefits even while he will not be able to experience it himself.

This renovation is not only adding space for production but adding new technology as well.

“Theatre, dance and film rely heavily on technology, this will enhance the work we do,” Coker said. “We finally have state-of-the-art complexes, with up-to-date technology.”

These upgrades will allow students to have more experience working with equipment that is used post-university and enhance the program’s ability to teach SDSU students. This comes at a cost, however, as the construction is quite loud and takes up some of the space of the performing arts district on campus.

“This is the point where we are sacrificing,” Coker said. “With the fact that construction is going on which means we have two smaller stages; The Don Powell Theatre is just using the stage and with the Experimental stage, we are just using half the space.”

Students and faculty have made many sacrifices throughout this construction process. Gonzalo Ochoa, a freshman studying vocal performance, has experienced the inconvenience of the construction but is excited about the future.

“In some classes, the construction noise interferes,”  Ochoa said in regards to his vocal performance classes.

Ochoa said while the construction interferes now, it will help stop restrictions later.

“We won’t have to restrict ourselves as sometimes the spaces are occupied but I imagine the renovation will help with that,” Ochoa said.

“When you have facilities that are state-of-the-art and are comparable with the best theatres across the country, that is certainly a draw,” Coker said. “The advantage of doing it (theatre) in a  contemporary space by far outweighs doing it in a space that is 30 or 40 years old where the technology is not current.”

Although the project will not be complete until 2023, the excitement about the new facilities seems to be shared amongst performing arts students and faculty.

“It’s almost the philosophy of using a computer that does not have Wi-Fi or internet access and now you have a computer that is Wi-Fi ready and Bluetooth ready,” Coker said.