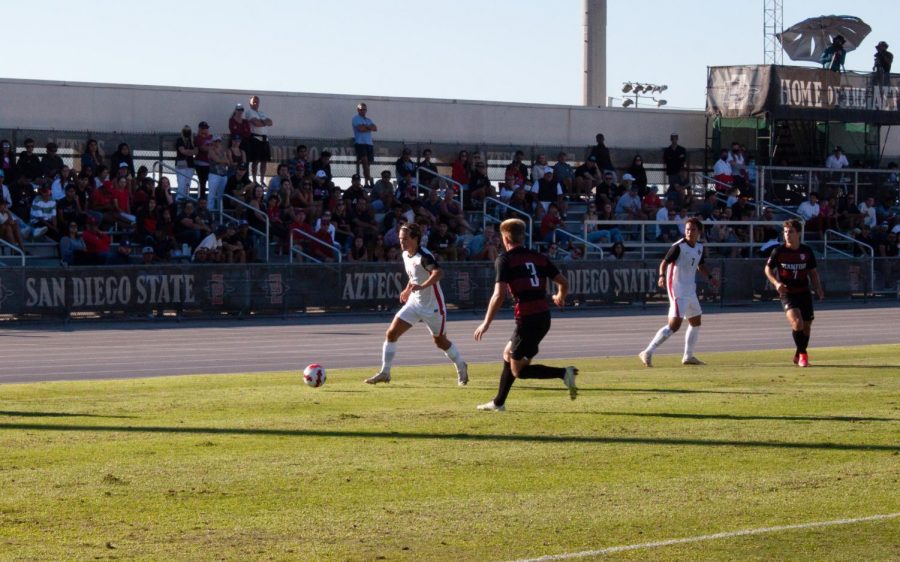 Freshman Alex Hjælmof (left) dribbles towards a Cardinal defender during a match against Stanford.

Oregon State did their damage early, scoring in the 19th minute as graduate Adrian Molina-Diaz found the back of the net after a setup from sophomore Javier Armas and freshman Joran Gerbert.

The Beavers would add another just six minutes later as sophomore Carlos Moliner slipped another past sophomore goalkeeper Jacob Castro. The two goals ended up being the first first-half goals allowed by Castro this season and the first time the Aztecs had trailed in regulation this season.

The Aztecs struggled to get their offense going as they were outshot 19-4 and 8-2 in shots on goal, totaling only two shots in each half. Sophomore Iñigo Villaldea led the Aztecs with two shots.

Despite the disappointing finish, head coach Ryan Hopkins was pleased with the Aztecs’ resiliency.

“I’m not a believer in moral victories,” Hopkins told SDSU athletics. “But [I] was really proud of the way we kept fighting and believing even in toughest moments. Those lessons are not only valuable for soccer but also life.”

After suffering their first two losses on Thursday and Sunday, the Aztecs will look to rebound against a tough UCLA squad Friday evening in Westwood. The 23rd ranked Bruins are currently 6-4 and 2-2 in Pac-12 play. Both teams will be looking to break a two-game losing streak as the Bruins similarly lost to both Oregon State and Washington this weekend.

“The true test of a coach and a team is how they respond to hard times, so I’m excited to see our response against a talented UCLA team,” Hopkins told SDSU athletics.