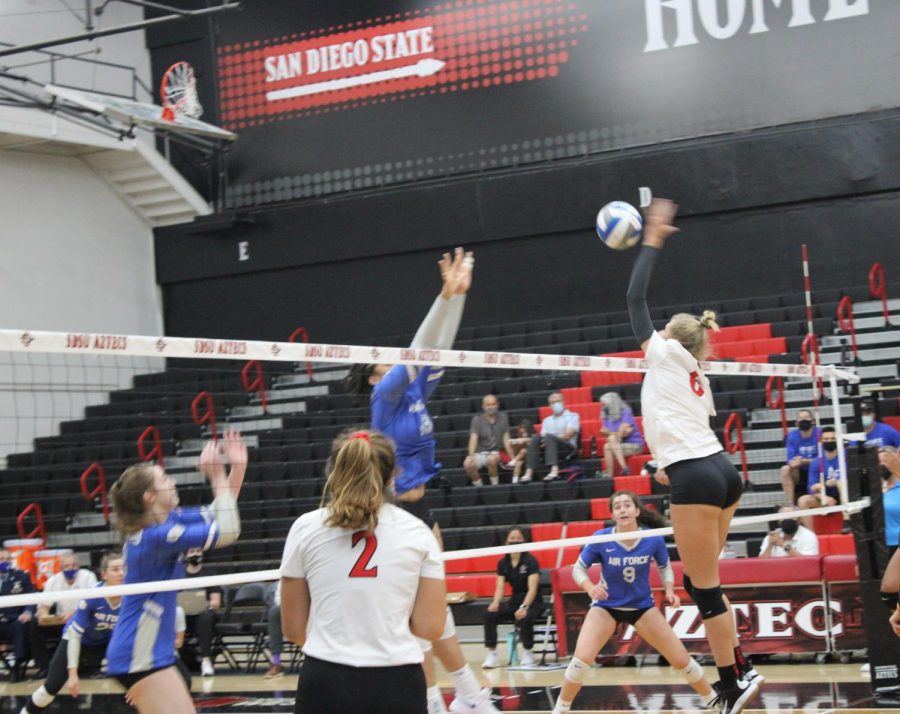 Freshman Jordyn Goldsmith (6) makes a play on the ball against Air Force.

SDSU started the game with a 5-1 offensive system, which they had never run before.

“Our back row attack was not effective last night and that was to be expected,” head coach Brent Hilliard said. “That was the first time running that system all year and we just weren’t ready for it.”

The Aztecs dropped the first, second and fourth sets after New Mexico was able to break away and take the lead, including a 6-2 run in the first set to take an 18-12 lead. The Scarlet and Black were able to keep it close, but the Lobos eventually took the sets.

One highlight in the second set was sophomore outside hitter Heipua Tautua’a, who recorded three kills after getting none in the first set. Tautua’a ended the game with nine kills, tying with senior outside hitter Victoria O’Sullivan for the team lead.

“She had a nice offensive night after the first game, the first game she struggled but after that she found her happy place and really started to make some good swings,” Hilliard said. “We need that from (Tautua’a), she’s someone we’re waiting for more streaks than we’ve had so that’s a good sign of things to come.”

The Aztecs were able to respond in the third set, taking a narrow lead over the Lobos. After a 5-0 run-off of kills from freshman opposite hitter Jordyn Goldsmith and freshman outside hitter Mikela Labno, SDSU widened its lead and took the set 25-16.

The shift in momentum came from falling back to the 6-2 offensive system when the 5-1 system did not produce the results they wanted.

“A 6-2 just puts a little bit of a bigger block on the right side for us and another attacker, so it added a third attacker in three of the rotations where we only had two attackers,” Hilliard said.

The freshmen were given the opportunity to show their skills on the court, with Goldsmith getting the start and Labno and opposite hitter Kalani Ruri being rotated in. Goldsmith posted six kills and Labno had the second-most kills with eight.

Hilliard said the more experience they get, the better it is for the future of the program.

“All of those first-time experiences will be gone later in the season and moving forward into next year and that’s what you want,” Hilliard said. “You can’t get that experience until you’re a sophomore or junior and they’re getting it right now and it’s only going to benefit them in the long run.”

Moving forward, Hilliard said keeping the energy up is critical.

“It’s still really early in the conference, and they need to continue to try and put in that effort and energy on a day in and day out basis,” Hilliard said. “What I don’t want to happen is for them to lose energy and to lose focus and have to put stuff behind them. And the quicker they can do that, the more they can go forward and improve.”

The Scarlet and Black have not lived up to their full potential this year but made major strides with their win against Air Force. The Aztecs’ season has been filled with adversity but they are still finding ways to make everything work. Head coach Brent Hilliard said he was pleased with his team’s prominent win against the Falcons.

“I made a conservative effort to dial back on my critiques on plays,” Hilliard said. “They have been grinding pretty hard and I think they just needed a couple of days to relax and enjoy playing and let them do what they do.”

The Aztecs received a major contribution from senior Victoria O’Sullivan who led the team with 13 kills, three aces and three blocks. She has been a leader for the Aztecs all year and a catalyst for their success.

“Just the fact that they handled a lot of adversity to this point in the season,” Hilliard said when asked about the team’s resilience. “Including with a loss in the last match against New Mexico. So, it’s great that they were able to respond that shows a lot of character and we preach that.”

The Aztecs are currently eighth in the Mountain West Conference and are 2-2 against the teams they have played so far. With 14 games left, they still have time to make it to the top of the conference. The Scarlet and Black are set to take on the UNLV Rebel — the second-best team in the MWC — on the Mesa on Oct. 5.

The matchup against UNLV will be their first match against each other of the year. Last year, the Aztecs lost both games against the Rebels.

Coming off a good performance against the Air Force, the Scarlet and Black still have plenty to improve upon.

“We got UNLV, which was our conference champion,” Hilliard said. “We don’t need motivation, that’s always good when we play somebody who is elite. We have had a few opponents here in UCLA and USD that should prepare us for really good teams to come in and hopefully we continue to work with this lineup that is pretty new and if they can continue to grasp the concepts they will be great.”