‘State Dates’ is a great place to make friendly connections 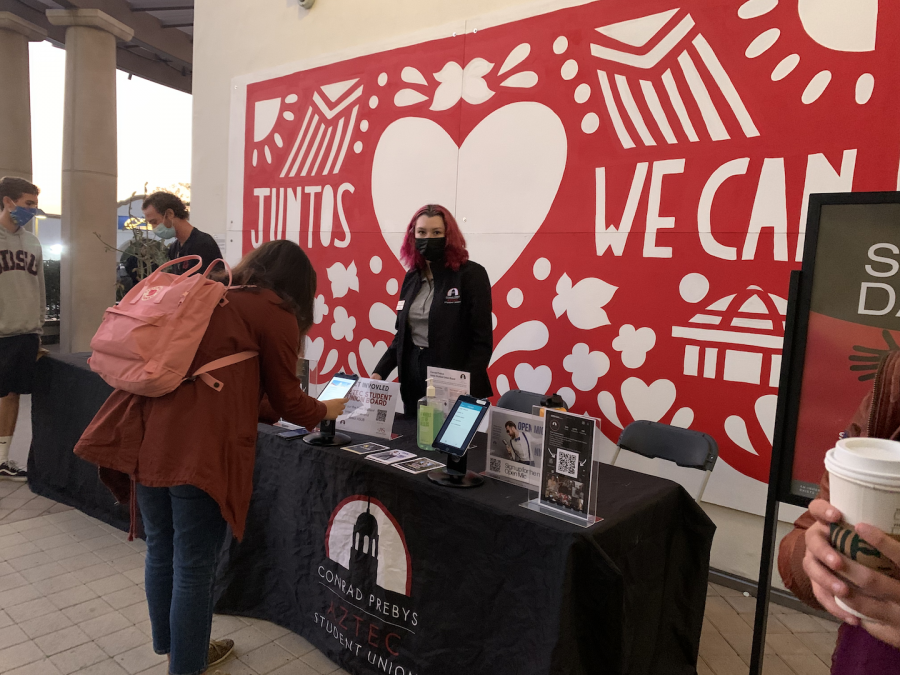 With a name that was a bit misleading, ‘State Dates’ was actually a speed dating event for finding potential friends.

The ‘State Dates’ event was held on the Student Union Starbucks patio on Wednesday, Sept. 29.

To keep up with upcoming events, Paredes recommended keeping up with the posters around campus and the Union’s official social media.

“If you ever have free time and need to stay on campus or want to stay on campus, always come by the Union cause there’s always gonna be a free event, maybe free food,” Paredes said, “Just hang out here in the Union, it’s the campus living room.”

“We have this new mural, it’s from a Latinx artist and so to highlight it we decided to have state dates here in the patio,” Chair of the Union Special Projects Committee Jano Paredes said.

Paredes said he was surprised by the turnout because the patio seemed barren, save for the students studying before the event.

“All the tables were full, a lot of people liked it, everyone was being loud and conversing,” Paredes said.

Chrishael Sanchez is a freshman at SDSU studying public health who said she became ecstatic for this event when she saw it on the Student Union’s Instagram.

“I thought it was really cool, I got to meet like a bunch of people,” Sanchez said. “I talked to this girl over the summer and we hadn’t talked since then but I actually met her here again.”

According to Corona, she met someone at ‘State Dates’ who’d gone to a Hannah Montana concert around the same time she did a few years back.

She added how one of the two people that Corona was supposed to come with couldn’t make it. However, that didn’t stop her from having a good time.

Having a good time and meeting new people seemed to be a common theme, especially for Anthony Leon-Diaz, a senior majoring in Business administration entrepreneurship.

“Hopefully they can continue doing things like this, so that way people can meet new people,” Leon-Diaz said.

Throughout the night, Paredes and Scholbrock would ask random questions to facilitate conversation. One of the questions was what students at the event would do with $1,000.

Leon-Diaz raised his hand to say his answer on the microphone.

“It wasn’t even a question, I knew what to do with that,” said Leon-Diaz, “Like you know what, Imma take that money and purchase a music beat on the internet.”

Leon-Diaz is an up-and-coming musician and can be followed on his Instagram for those who wish to follow his career.

At the end of the day, ‘State Dates’ was for people who missed social interaction and wanted to make new friends. For more student union events and future state dates follow @aztecunion on Instagram.

To keep up with upcoming events, Paredes recommended keeping up with the posters around campus and the Union’s official social media.