Students pop and lock for a good time 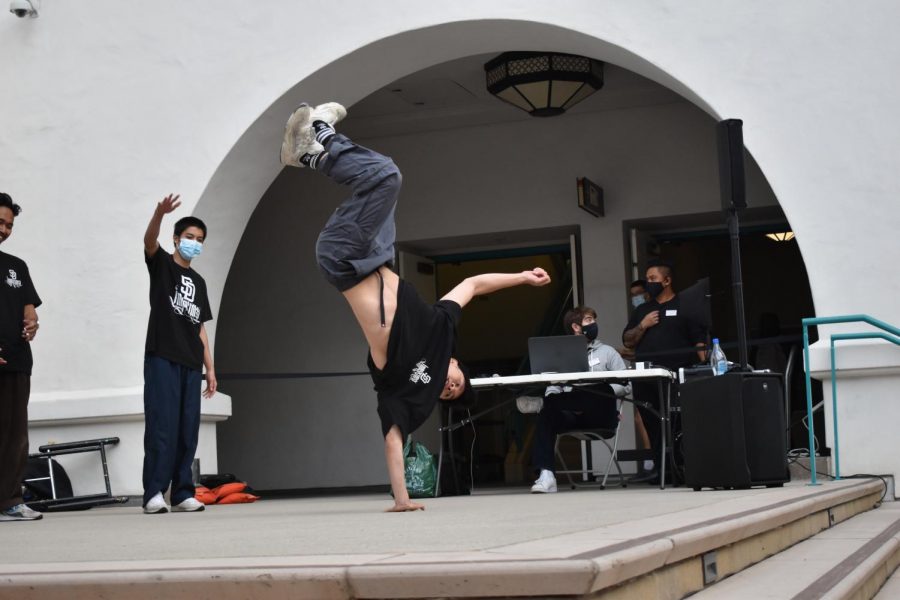 Performer Jason Hwang balancing his body using his left hand in the middle of a power move during his routine.

The Conrad Prebys Aztec Student Union put on “street performer night,” on Sept. 28 where students lined up for free Raising Canes and an epic show. The long line of students eager to get a taste of chicken brought a good turnout.

Scholbrock took center stage with a microphone to introduce the first performers of the night.

“We had a dance team called the SD imperials perform, breakdancing on and off the stage,”  Scholbrock said. “They were super intriguing and engaging.”

The breakdancing group came out to show some mad skills. Starting with the basic moves, like the freeze – a technique that involves halting all body motion, often in an interesting or balance-intensive position. As well as the toprock which is how breakers start their throw down while standing still before going to the floor.

This progressed to power moves where dancers propel their whole body into a continued spinning or rotational motion while balancing on their hands, elbows, head, back or shoulders. There were also many transitions — the movements breakers use to get in and out of their moves — happening between sequences.

Popping and locking to the music, each member of the group had a chance to show off their dance moves. The impressive routines had people clapping and cheering.

For 15 minutes, students were in total awe as they did tricks including handstands, flips and windmills. This is where the breaker rolls his torso continuously in a circular path on the floor, across the upper chest/shoulders/back, while twirling his legs in a V-shape through the air.

After dancing back and forth, the show ended with the breakers in the middle of the square with students surrounding them.

With a bow, the music switched and the next act was getting ready to come on stage. A large tarp was laid out across the stage, with an aisle and paint.

Speed painter Amy Burkman, showed off her talent as she painted a Bob Marley portrait upside down in two minutes. Keeping time with the music, Burkman made sure to finish before the song ended.

“With COVID I’ve been doing a lot of virtual events, so it’s always fun to perform in front of an audience,” Burkman said. “Just cause you get that feedback.”

Burkman said SDSU requested she painted Bob Marley and this was her second time at SDSU.

According to Scholbrock, 300 plus students turned out to the event to support and watch the activities in the square.