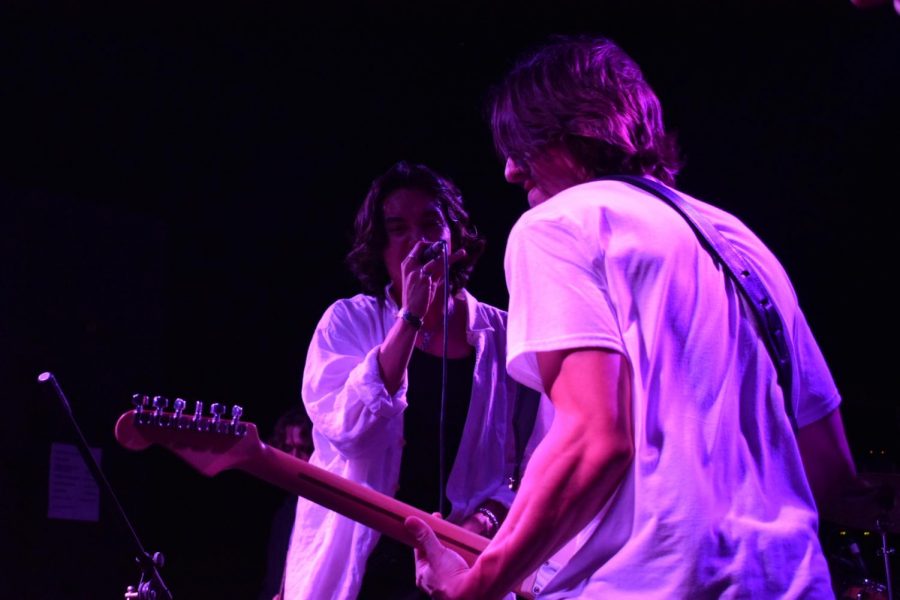 Saint Luna played a sold-out show at SD Soma with a string of additional bands leading off the night.

by Sara Rott and Maritza Camacho

When one thinks of a concert, they can’t help but think of live music, dancing ‘til your feet hurt and waking up the next day with your voice gone from screaming.

Saint Luna, a band made up of five San Diego State students, got their chance to have a milestone concert experience when they sold out local concert venue Soma San Diego on Saturday, Oct. 2.

Saint Luna lined up five other artists and bands to warm up the crowd before they took the stage. This included Girl Boss —– a new upcoming band, Court Verano — an indie rock/jazz fusion trio / Dixie Reese, Video Violence — a surf grunge group, Los Shadows — surf/dream pop-rockers and, last but not least, Foxtide — a trio of talents bending genres and experimenting with sound.

The first band, Girl Boss, fired up the crowd and engaged them to get loud, all the way up to Foxtide bringing in the most fans, each band got a chance to show off their music and ultimately prepared Soma to get ready for Saint Luna.

The second Foxtide finished their set, the house was packed and fans settled in motion chanting “Saint Luna” over and over.

With a quick change of equipment, Saint Luna was ready to perform to a sold-out crowd of fans. The screams, claps and cheers from the audience were so deafening that anyone outside could hear them.

The fans got rowdy. From crowd surfing to mosh pits, there was nothing but electric energy throughout the venue.

Playing their hearts out, Saint Luna delivered an epic performance filled with solos, jumps and drummer Paarsa Heidari playing shirtless. Nothing but smiles could be seen on each band member’s face as they passionately performed with everything they had.

What a night for these SDSU students to remember, creating history by performing at this well-known venue.

Quinn XCII, Chelsea Cutler and Tai Verdes made the audience scream, cry and dance all in a span of three and a half hours on Oct. 2, which left the Cal Coast Credit Union Amphitheater in a shaken state by the end of the night.

When attendees walked through the gates, many were in a state of confusion as they tried to find their seats or friends. Some were already seated holding on to their signed “Stay Next To Me” tour posters. Others mindlessly waited in line for food, drinks or merchandise. Regardless of where people stood, at 7:30 p.m. Tai Verdes went on stage and everyone eagerly stood up to dance.

The 6-feet 7-inch Verdes opened for the “Stay Next To Me” tour, and stimulated the crowd with his vibrant and dynamic energy. He sang multiple feel-good relatable songs such as “we would have some cute kids,” but as he sang his TikTok famous song “A-O-K,” the crowd screamed with their soul. Regardless of age, status or background, at the end of the day fans are all jumping blindly into the real world and Verdes reassures them it’s going to be okay.

After a 10-minute delay due to microphone issues, Chelsea Cutler jumped on stage and sang “Sad Tonight.” Cutler definitely made sure the crowd wasn’t sad that night as she frequently reminded her fans how grateful she feels to be back performing and how appreciative the audience should feel to be surrounded with great people.

Her stage setup was colorful and matched the vibes of her songs perfectly as her setlist ranged from sentimental ballads like “you were good to me” to lively up-tempos like “The Reason.” Cutler also for the second time ever played her new single “Devil On My Shoulder” from her new album “When I Close My Eyes” coming out on Oct. 15.

Cutler’s drummer, Gavin Chops, stood out Saturday night with his crazy quick solos which kept the audience on their feet. People were at the show for multiple reasons due to the various artists performing, but Cutler brought everyone together to passionately sing her rendition of “Mr. Brightside.”

Quinn XCII came onstage last but kept the energy running as he started off his set with “Am I High Rn.” His performance of “My Wife & 2 Dogs” was a memorable one as he played a video montage of his adorable dogs on the back screen. His set was briefly interrupted halfway through when his audio was masked with static noise, but as he apologized for the technical difficulties, he jumped right into a new song and did not disappoint the audience. Before he played “Hey, Goodbye,” Quinn communicated to the audience about the hard truth of breakups, how you learn from them, and how the end of his high school relationship led to him living his dream and performing his music to hundreds of people.

After a couple more songs, Quinn brought back his “little sister” Chelsea Cutler and they wholeheartedly glowed together as they sang a few of their collaborations such as “Flare Guns” and then closed the show with “Stay Next To Me.”

If you were a die-hard fan of the performers or not, these three artists did not disappoint and provided a chill atmosphere that night, despite the technical difficulties. As the audience felt the beats vibrate in their hearts and their bodies swayed effortlessly to the feel-good lyrics, it was a moment of appreciating how good it feels to listen to live music again.