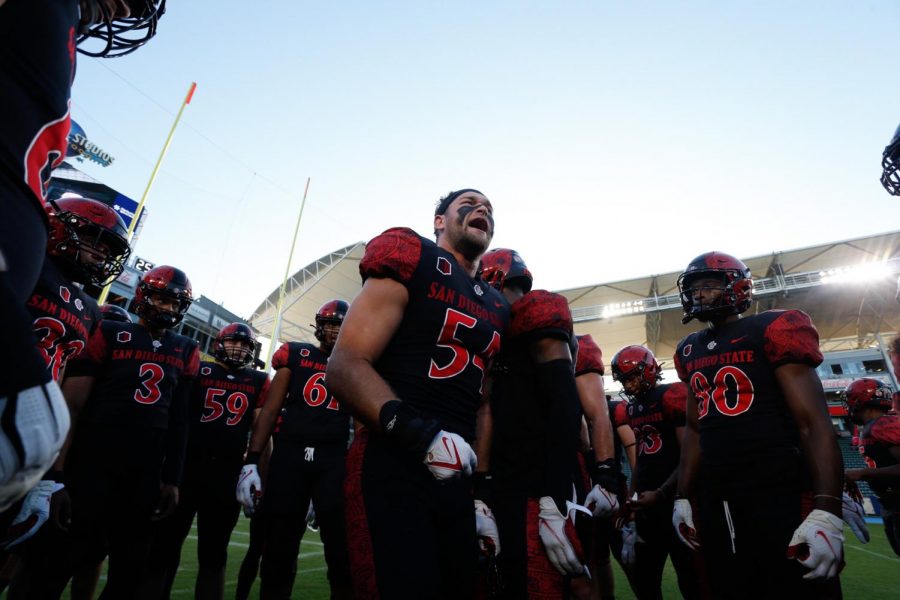 Senior captain Caden McDonald (center) hypes the Aztecs up during the game against New Mexico. (Courtesy of Derrick Tuskan/SDSU Athletics)

After missing nearly the entire game against Towson two weeks ago, Bell rushed for 111 yards on 21 attempts while scoring his fifth touchdown of the season as the then No. 25-ranked Aztecs (5-0, 1-0 Mountain West Conference) dispatched the New Mexico Lobos (2-4, 0-2 MWC) 31-7 at Dignity Health Sports Park.

Bell took advantage of situations presented to him by his offensive line — a trait that didn’t go unnoticed by head coach Brady Hoke.

“He’s got very good vision,” Hoke said of Bell. “He did a very nice job of being able to burst through the hole.”

After suffering a shoulder injury, Bell was initially questionable to return against the Lobos. But — after practicing all week leading up to Saturday — Bell was inserted into the lineup with immediate results.

On his first run of the game, Bell burst through a gaping hole opened by his offensive line for a 40-yard run. Five plays later, the senior back scored on a one-yard rush to put the Scarlet and Black up 7-0.

His 111 yards pushed him over the century mark for the ninth time in just 16 games and the eighth time in 12 matches.

A Matt Araiza 44-yard field goal at the start of the second quarter pushed SDSU’s lead to 10.

Another player returning from injury— senior quarterback Jordon Brookshire — had less success. Brookshire returned to the starting lineup after missing two games due to injury and went 11-24 with 130 yards. Many of his throws were either over or underthrown in the first half.

Brookshire struggled at times to set his feet when throwing on the run, leading to many incomplete passes when he scrambled outside the pocket.

“He basically stumbled a little bit,” Hoke said. “So, he never set his feet or his hips and never got that platform like we wanted to.”

Despite being shaky through the air, Brookshire continued to get the job done on the ground, continuing his streak of scoring rushing touchdowns. Brookshire scored in the second quarter on a one-yard scramble while a fake handoff to senior running back Kaegun Williams fooled the Lobos defense and allowed the quarterback to slip into the endzone for an 11-yard score.

“I feel pretty good running the ball,” Brookshire said, about his running abilities. “As far as, you know, being more comfortable than one or another, I think it’s just two completely different aspects of the game.”

The main reason behind SDSU’s dominance? The defense.

“I think it just came down to pressure,” Banks said. “When we get guys in his face, that doesn’t give him as much time to go through his reads and his progressions like he wants to so there was pressure in disguise and coverages as well.”

The plan — for the most part — failed.

When Wilson Jr. wasn’t being hounded by an Aztec defender or lying flat on the turf, Thompson was limiting the Lobos’ receivers to short gains or knocking the ball to the ground.

Thompson picked off a wobbled pass at the end of the second quarter to keep New Mexico off the scoreboard and had a second interception called back for pass interference.

“I think he has gained more and more confidence in man coverage,” Hoke said. “I think coach Mattix has put him in good positions either bringing him in, letting him blitz off the edge or putting him in zone combinations or man’s.”

Bell was pulled in the third quarter after losing a fumble that would be picked up by New Mexico and returned for a touchdown.

By the time SDSU scored their fourth rushing touchdown of the game in the fourth quarter, New Mexico had been both physically and mentally checked out of the game.

Bell and the Aztecs will look to continue rolling next week as they travel to San Jose to take on the San Jose State Spartans (3-3, 1-1 MWC).