Review: Daniel Craig Clears Final Mission as 007 in ‘No Time to Die’ 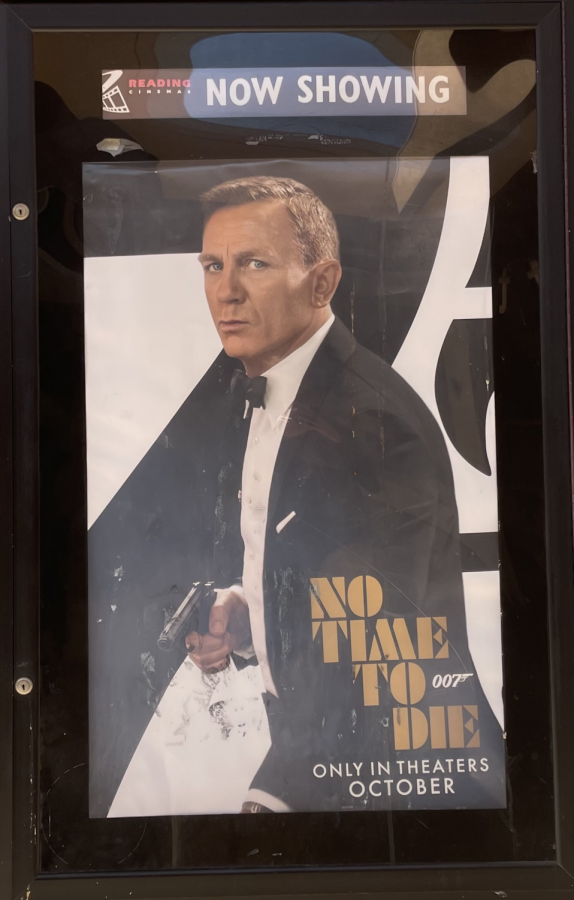 "No Time to Die" poster displaying outside of Reading Cinemas in La Mesa, CA.

When the ex-007 agent (Daniel Craig) is visited by his old friend/CIA connection Felix Leiter (Jeffrey Wright) for one last case, he turns it down. That is until he learns of the involvement of Spectre, the shadowy organization hellbent on destroying him and his colleagues. What follows is Bond’s most life-altering mission yet, but how much will he lose to retire in peace?

Directed by Cary Joji Fukunaga (season one of “True Detective”, “Beasts of No Nation”), “No Time to Die” is more than your average changing of the guard. The film, Daniel Craig’s final outing as 007, is Bond’s personal reckoning with truth, commitment and even his own legacy.

The film begins with a hell of a (double) cold open; a home raid, car chases, all of the things we love and expect from a Bond film.

From there, we transition into Billie Eilish’s title theme; even if the lyrics are a bit cliché, “That I’d fallen for a lie, you were never on my side”, it’s a haunting and vulnerable track and she’s perfectly suited for a Bond theme. It’s the icing on the cake for Daniel Kleinman’s emblematic title sequence, featuring crumbling Britannia statues, a bullet-riddled Aston Martin and dots darting across the screen in homage to the opening credits of the first Bond film, “Dr. No.”

It’s a clever move as “No Time to Die” is essentially a skilled reimagining of “Dr. No” (the connection to Jamaica, the island base, Safin’s Noh theatre mask), essentially ending where it all began. While “Skyfall” was a confrontation with Bond’s past, “No Time to Die” confronts his future. How much weight do those three iconic numbers carry in a world and agency that has moved on without him? How long will his fear and distrust bar him from committing to his closest allies? Maybe these concepts are a bit rote, but for the 007 series, it’s a long-overdue dialogue; and Craig effortlessly rolls with all the punches. Without a doubt, he will go on record as one of the best Bonds on file.

In contrast, Rami Malek delivers a chilling performance as Safin, offering little remorse and rarely blinking. While the writing for his character isn’t on the same level as Silva from “Skyfall,” it is still apparent that the best (or most memorable) Bond villains are a dark reflection of Bond himself.

Léa Seydoux’s return as the enigmatic Dr. Madeleine Swann is a welcomed one —  finally, a Bond Girl with ongoing character development! It only took us…almost 60 years? Nevertheless, Seydoux gives a vulnerable performance and it’s fascinating to see Madeleine slowly drop her guard throughout the film.

Joining the many returning cast members, Lashana Lynch makes her series debut as Nomi, the inheritor of the 007 mantle. Hopefully, this status becomes permanent because Lynch’s performance nails the vibe of the series (badass yet witty) and she has brilliant chemistry with the rest of the cast. Why search for a new Bond when Lashana Lynch is right there?

While it’s taken some time to get here, it’s great to see more female characters in the Bond franchise with a purpose because after all, has one truly lived until they’ve seen Ana de Armas dropkick somebody in an evening gown?

Even if experienced audiences might predict some of the beats coming, “No Time to Die” still closes out the Craig era with some of the best writing in the franchise’s history. This is significant, considering the narrative leaps and bounds made during this period. Throw in some stunning cinematography from Linus Sandgren, and you’ve got a hell of a final act.