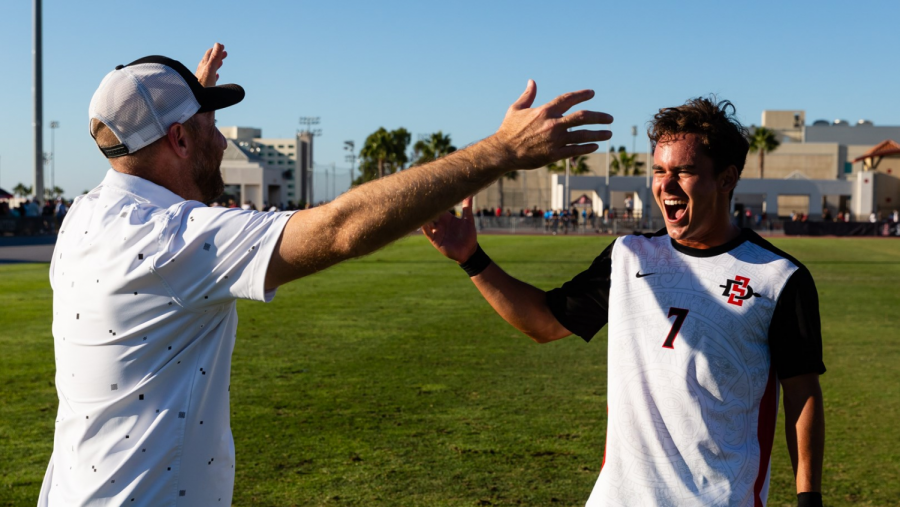 According to head coach Ryan Hopkins, whenever the team scores first it is a confidence booster to keep doing well throughout the game.

USD took more quality shots on net in the first 45 minutes of play from 10 to 15 yards out. The Aztecs had many opportunities to take shots from that distance but didn’t. Hopkins said he would rather his players take quality shots from a shorter distance than from 30 yards out and not be efficient.

“It was how central can we get on our shots,” Hopkins said.

In the 66th minute, the Toreros came close to scoring with a quality shot from sophomore midfielder Rhys Gourdie that was stopped by Castro’s diving block. The ball then deflected to freshman midfielder Luke Pardoe who shot on goal but was stopped by the foot of an Aztec defender.

In the 68th minute, Castro came to the end of the box to make an aggressive catch save but was fouled hard by Pardoe and he ended up going down. Hopkins called the foul a “cheap shot.” Sophomore defender Elias Katsaros didn’t like the foul and got into a confrontation with Pardoe. Katsaros and Pardoe were given yellow cards after the incident. Castro got up and continued in goal.

USD kept up their aggressive play and finally executed in the 88th minute when Tunbridge put a shot on goal from the right side of the net that deflected off of an Aztec defender and ended up off the crossbar then tapped in by sophomore midfielder Ross Johnstone, tying up the score 1-1 with two minutes left and the possibility of going into overtime.

The Aztecs were eager to end the game before regulation and got their chance when an Aztec player was fouled by Gourdie to create a free kick opportunity from 15 yards out. The time showed 89:53 and Villaldea would take the free kick for the Aztecs that was sent into the box, headed by freshman defender Rik Regeling — making his first career start — and tapped in by junior midfielder Blake Bowen. With just five seconds left in the game, the Torero players fell to the ground with the emotions of frustration pouring out of them.

“It feels good to get another [game-winner],” Bowen said in a post-game press conference.

Hopkins was impressed with Castro’s goalkeeping. He made four saves on five shots on goal in the game and now has a save percentage of 0.880.

“That is why he is the best goalkeeper in the country,” Hopkins said.

The Aztecs go back into Pac-12 conference play Thursday against the Stanford Cardinals (4-5-2, 1-3-1 Pac-12) who are looking for revenge after losing in double overtime 1-0 on Sept. 19.

“Two wins will get us to the NCAA tournament,” Hopkins said.

The Aztecs — who are 2-3-0 in their conference — are looking to move up the ladder with a win at Stanford.