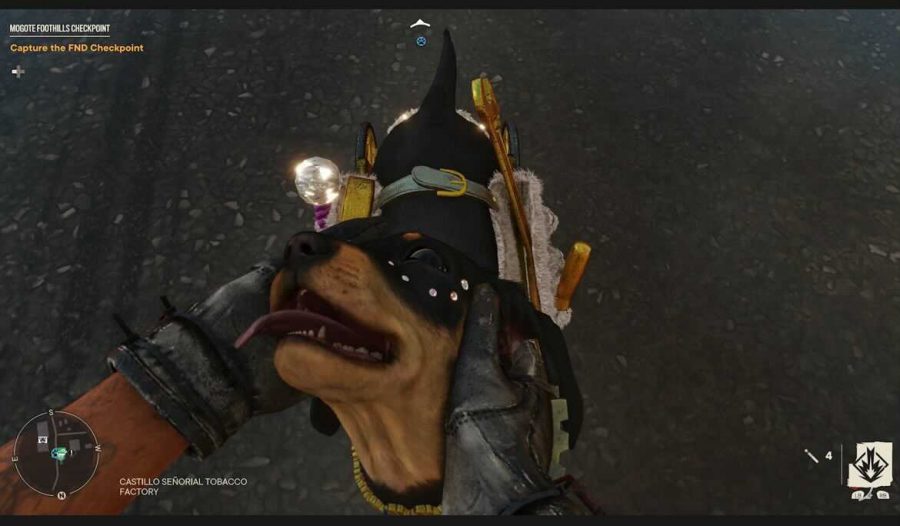 Gameplay screenshot of "Far Cry 6" and the cute puppy's name is Chorizo.

Over three years have passed since zealous gamers have taken down the fanatical cult “The Project at Eden’s Gate” which terrorized fictional Hope County, Montana in the game “Far Cry 5.” Now, game development company Ubisoft is back with the sixth installment in the “Far Cry” video game series.

“Far Cry 6” tells the story of a fictional tropical island in catastrophe known as “Yara.” This island is led by the dictator Anton Castillo, who rules with an iron hand. In addition to leading a country, Castillo is also grooming his twelve-year-old son Diego to take over as the nation’s leader one day.

Fans of shows such as “Breaking Bad” and “The Godfather of Harlem” will recognize Anton Castillo, as he is portrayed and voiced by actor Giancarlo Esposito.

“Far Cry is known for its larger-than-life villains. This is a legacy I intend to honor,” Esposito said in the official “Far Cry 6” trailer.

In the game, Castillo prides himself on the development of “Vivro,” which is a tobacco product with the supposed power to cure cancer. Castillo implements a system of forced labor to produce the “Vivro,” and labels it as a way to rebuild the “paradise” of the Yara nation.

Players work their way through an open map world fighting as the character Dani Rojas, who is a member of the “Libertad,” or the countermovement against Castillo’s regime. The map is divided up into seven regions, and players must liberate all seven regions in order to finish the game. Ubisoft replicates real-life guerrilla warfare through armed and close-quarters combat such as ambushes, raids, and other hit-and-run tactics. The gameplay also allows players to craft their own weapons using recycled items such as CDs, nail guns, and other miscellaneous items found while roaming around the map.

To the delight of many “Far Cry” enthusiasts, the franchise has continued on the tradition of having animal companions that players can unlock throughout the game. “Far Cry 6” introduces seven new animal companions known as “amigos.” Two of which are known as Guapo and Chorizo. Guapo is a feisty and fiercely loyal crocodile with the ability to passively regenerate health and self-revive. Chorizo is a willful, handicapped dachshund who assists players by distracting enemies and regenerating player health.

Animal companions aside, one cannot separate “Far Cry 6” from its overtly political story. The story of a merciless dictator is far from fiction in the modern world, as citizens in countries such as Venezuela, Syria, and North Korea suffer great human rights violations from their governments.

When the first trailers were released in June 2021, the game received criticism for its political plot.

Narrative director of “Far Cry 6” Navid Khavari reassured fans that “Far Cry 6” was made in collaboration with “creators and collaborators for our team who can speak personally to the history and cultures of the regions we were inspired by,” he said in a Ubisoft Blog post.

Khavari cited his own personal family experiences with political conflict and revolutions. Khavari’s own family fled from Iran in the 1950’s and 1960’s.

“I am from a family that has endured the consequences of revolution. I have debated revolution over the dinner table my entire life. I can only speak for myself, but it is a complex subject that should never be boiled down to one quote,” Khavari said in the blog post.

“Far Cry 6” is a unique medium to tell the story of human hardship, suffering and triumph. Both video game enthusiasts and video game novices can find value in the latest installment of the “Far Cry” series.