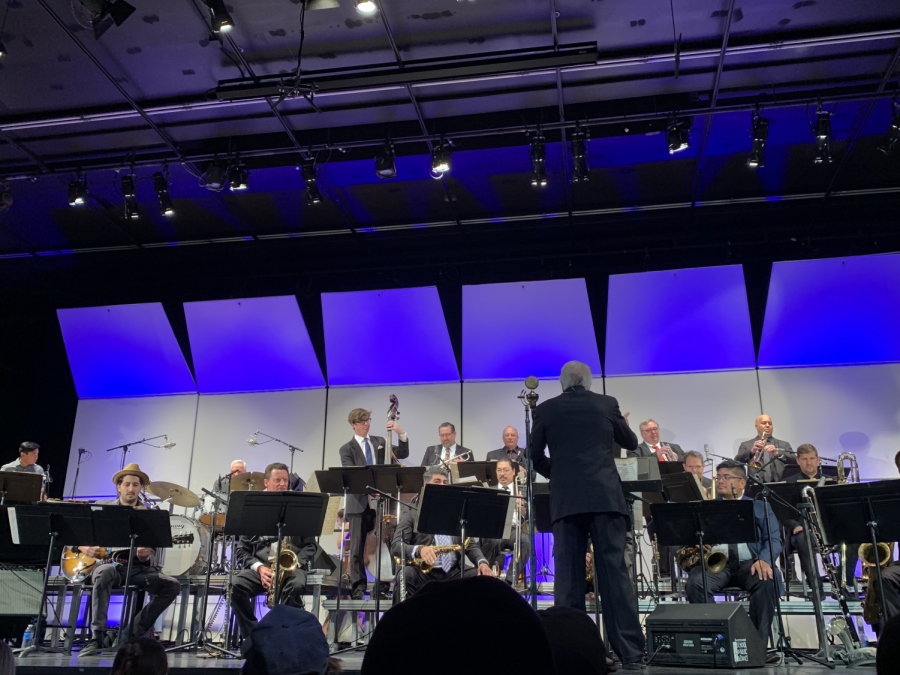 Bill Yeager Jazz Orchestra (BYJO) had a successful debut at San Diego State in Smith Recital Hall this past October 16. The program consisted of challenging charts taken from Louie Bellson’s personal library, which was inherited by Yeager upon Bellson’s passing.

Yeager has had a notorious trajectory in the world of jazz music, having shared the stage with big names such as Frank Sinatra, Ella Fitzgerald and Sarah Vaughn. He held the lead trombonist position in Louie Bellson’s band for 17 years. The Bill Yeager Jazz Orchestra is lucky to have some of the best jazz talent in Southern California, composed by colleagues and alumni of Yeager.

The event started with a fast-paced improvisation from Don Kuhli on the drums, immediately silencing the audience and captivating their attention. This concert was a double-debut, as BYJO premiered “Stars in a Lonely Sky,” the only programmed piece not from Bellson’s library. Yeager commented on this, saying the premiere was being recorded for the publisher as part of a deal with BYJO.

Yeager said conducting this debut was a “pretty exciting” experience. Pertaining the future plans for the BYGO, Yeager laid out a promising future.

“We are looking at touring… the first tour, maybe, to Japan [because] we are sharing this publisher with the Tokyo Jazz Orchestra… This is the maiden voyage of this band,” Yeager said.

In light of the deal that BYJO has with a music publisher, Yeager mentioned they will probably premiere a piece, although they do not have a defined concert series yet. Still, the conductor said he thinks they are off to a good start, as both of Saturday’s concerts sold out.

Unsurprisingly, gathering so many promising and talented musicians in one group is no easy feat.

“The band is so darn good… this is a culmination of 36 years here, and 10 years when I owned the Los Angeles Jazz Workshop,” Yeager said.

Some of the musicians in the band were once his students at either SDSU or the Los Angeles Jazz Workshop. Yeager said after the pupils completed their studies under him, they would continue playing together, and, in time, became friends.

This performance was eye-opening for some of Yeager’s general education students, who were required to attend the event, including management information systems sophomore Kim Pham.

“Since it was my first jazz orchestra performance, I didn’t know what to expect… After hearing everyone play, I’m more open to listening to more jazz music… prior to the performance, I only knew jazz as slow-paced, so it really opened my eyes,”  Pham said.

Jennifer Tran, a sophomore majoring in child development and another of Yeager’s students in a general education course, had a similarly eye-opening experience, as she had never experienced jazz live, and hadn’t listened to trumpet and bass in-person.

“It was awesome to see everything taught in class… in action,” Tran said. “Listening to… the orchestra live… changed my [perspective] on jazz music. It created my interest in jazz!”

Some slightly more experienced listeners also attended, such as Alvin Pham, a junior in Kinesiology, who commented that he has a lot of respect for jazz players, and noted that it was evident that the soloists were playing their hearts out, emphasizing how this reflected the performers’ passion.