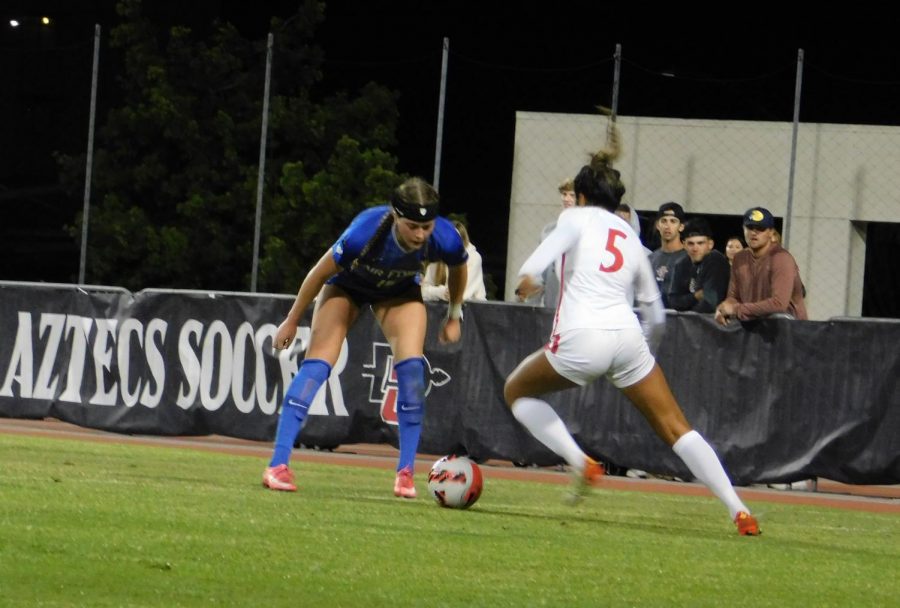 The San Diego State Aztecs (7-9-0, 5-3-1 Mountain West Conference) defeated the Air Force Falcons (6-8-2, 3-5-1 MWC) by a score of 1-0 Thursday night. With two games left in the regular season, the Aztecs are currently the three seed in the Mountain West playoff picture.

Senior forward Anna Toohey got a great chance early in the ninth minute off of a pass from freshman forward Alexy’s Ocampo that was put wide of the goal.

Illingworth — who made three huge saves in the first half (six overall) — said she could have done things differently in the game.

“I would say to be more vocal in my box and be stronger with balls in the air,” Illingworth said.

The Aztecs had a few great scoring chances off of corner kicks in the first half. In the 34th minute, a corner kick was sent into the box and junior defender Claire Watkins had a chance to score but Bych made the save.

In the 40th minute, Ocampo got a great chance and set herself up beautifully, but put her shot wide left of the goal.

Head coach Mike Friesen said the team going forward can be very dangerous but there are techniques the team needs to work on.

“I think we gotta still be a bit better on finishing and putting away some chances so we can not have such a tight game,” Friesen said.

The defense in the first 45 minutes was strong and gave the forwards plenty of chances to score goals.

Toohey said she was impressed with how many quality chances the team had in the first half.

“We’ve been working a lot on attacking and just placing the ball and not over hitting it and I think we did a lot better job this half,” Toohey said.

The Aztecs came out with continued aggression at the start of the second half when Gaines-Ramos put a great strike on goal that was denied by Bych.

In the 61st minute, the ball was taken to the Falcons goal and senior midfielder Daniela Filipovic — who could have taken a shot at goal — elected to pass it to Toohey, who put it over Bych to make it 1-0 Aztecs.

Fifteen minutes later, freshman midfielder Hope Paredes sent a beautiful corner kick into the box that was headed by senior defender Lauren Dicus just over the net and almost put the Aztecs up by two.

Freshman defender Jenna West, who substituted for Toohey late in the game, came out like a fireball. West was set up by a teammate for a header opportunity and put it right over the net.

Toohey — who has been struggling with a knee injury — said that might have impacted how she played against the Falcons.

Toohey played 56 minutes in the game with two shots on goal.

The Aztecs still pushed for a second goal and had the best chance with one minute remaining. Paredes pushed upfield with the ball and sent the ball up to Gaines-Ramos and she had a slight breakaway and took a shot on goal that was stopped by Bych.

The clock hit 90 minutes and the Aztecs came away with a huge win.

Gaines-Ramos was the most aggressive player on the field and ended up with three huge shots on goal.

Friesen said he was impressed with Gaines-Ramos’s performance in the game.

“I think she’s been great all year. She’s a big-time player and she’s a huge threat to other teams,” Friesen said. “She created a bunch of chances and had a couple I thought maybe she could finish but overall a huge performance.”

Gaines-Ramos said keeping up with the possession is one strategy she would like to use in the next game against Colorado College.

“Getting more upfront on the backline to keep going at them and keep on trying to take 1v1’s (one one one opportunities) especially as a frontline, and the defense can keep doing what they did today (Thursday night) and just translate that into the next game,” Gaines-Ramos said.