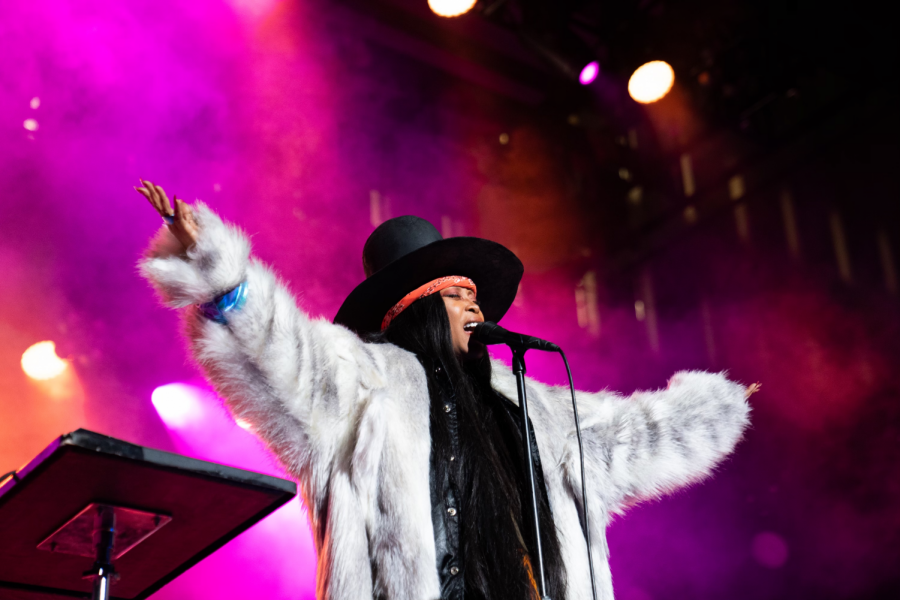 Erykah Badu welcomed fans of all ages to her Badubotron tour with a show-stopping performance of "Hello."

by Ryan Hardison and Katarina Josifov

Who says Wednesday evenings can’t be for sulking AND partying? Rod Wave says so.

Known for his piano-laden beat selection which resembles a church ensemble and an eye-opening lyrical focus on mental health, Wave’s painful tales of heartbreak and being down on his luck resonate with a large audience. As a stop on the last leg of his “Soulfly” to support his March 26 album of the same name, Wave performed nearly a nation away from his West Florida origins on Oct. 20.

Before the main event, a number of his affiliates drifted on and off stage like pestering flies, dropping a couple of verses before dipping stage left, including fellow Florida rapper OMN Twee and Houston emcee DJ X.O.

New Orleans rapper NoCap then emerged as the show’s primary opener. On nearly every track he rapped the final verses acapella, providing intimate moments with the audience — but not without his singing voice cracking a few times. He performed his biggest hit “Ghetto Angels” twice (despite only performing seven songs), and led a spirited round of “Free YB” chants, referring to his friend, incarcerated rapper Youngboy Never Broke Again.

After NoCap departed, there were a few moments when the crowd leapt to their feet because of movement on the stage, only to be massively disappointed when a stagehand descended from behind the curtains. The house DJ bided the time between sets by exclusively playing mid-2000s Young Jeezy hits like “Soul Survivor.” (Something which this humble arts & culture editor deeply appreciated.)

This was all a setup to time Wave’s emergence through the makeshift “Soulfly” pyramid center stage with the intro to Jeezy’s regional hit “Trap Star,” aligned with an elaborate timer counting down on a large screen.

Wave covered a lot of ground in his show, beginning with selections from his hit-heavy 2019 project “Ghetto Gospel” and ending with songs from the deluxe version of “Soulfly.”

Throughout the set, there was a massive momentum shift in the crowd from elation to revelation. It felt like many people in the crowd had been holding in intense pain and emotion, which was suddenly conjured up by two seconds of the tune from “Heart on Ice” and a passionate scream of the chorus. With the chance to fully sing with their chest while dancing away their struggles – who needs therapy when you have Rod Wave to help overcome your deepest sorrows?

After four interminable years since her last visit, the undisputed godmother of soul —Erykah Badu— graced the San Diego stage again for her nationwide tour, “Live from Badubotron,” igniting a trance-like state for listeners at the Cal Coast Credit Union Amphitheater.

Scintillating beams of light descended from the sky and formed a pyramid behind Badu as she sang, “Whatcha gonna do when they come for you?” and awakened nostalgia in many, blissfully performing her beloved neo-soul discography. Progressing through the evening, the energy intensified with a combination of soul groove and energized funk that creatively incorporated warm colors and stunning visuals in the background. A fan favorite, “Tyrone,” received passionate sing-alongs from the amused audience.

Another show-stealer was Badu’s distinct clothing which flowed with her as she danced around the stage, jamming to the captivating music. Wearing an oversized silver coat, funky wool boots, and a signature Badu staple—a high crowned black bowler hat— the singer’s cool, contemporary style enhanced her regal stage presence and fans’ viewing pleasure.

The numinous performance came to an end as Badulla Oblongata beautifully belted her final melody, leaving the crowd in complete awe. From “hello” to “goodnight,” the esoteric concert evoked a sense of community, passion, and pure love. After over 20 years in the music industry, Badu’s hypnotizing energy still made the summer come around and the flowers bloom — as she became the sun, and the audience became her moon.

Neo-Soul legend Erykah Badu descended from her mountaintop and graced the Cal Coast Credit Union Amphitheater with her magnetic presence on Friday, Oct. 22. With hand-picked classics from her unique collection of hits, she transported the audience to the lush, kaleidoscopic planet of Badubotron, where the only rules are to mind your business and scream if you feel like it.

Always one to surprise, Badu left out a handful of her most-celebrated hits, including “Next Lifetime” and “Didn’t Cha Know.” Instead, her setlist was fully committed to the theme of the Badubotron tour, and mostly consisted of selections from her electrifying, futuristic mixtape “But You Caint Use My Phone.” This includes the serene love song “Hello,” which doubled as a beautiful introduction to the night’s intergalactic groove.

Like a shimmering celestial being, Badu delivered a presence that makes the audience hang onto each syllable uttered and every millisecond of movement. She performed crowd-pleasers like “Tyrone,” “On & On”, and “Appletree,” each of which shaped the fabric of soul music enough to have a substantial effect on both ’90s adolescents and the twenty-somethings of today. The crowd had plenty of representation from each demographic. Badu could have just napped on stage for an hour and a half and most of the crowd still would have stayed to get any glimpse of her aura.

Complete with a black bowler hat, a radiant fur coat, and enough style and substance to charm any skeptic, Badu transformed the event from a concert into a theatrical performance — just what any fan of hers could ever have hoped for.