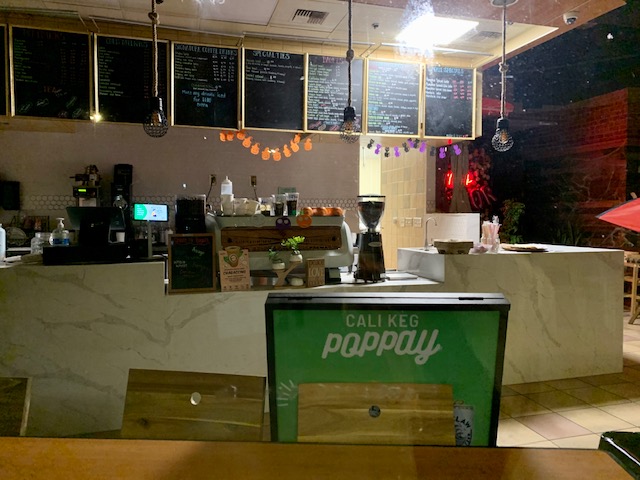 Pop ID has reached into the future; Pop Pay and Pop Entry. Pop Pay is a tablet to scan faces to pay at shops. The Pop ID website is where you go to sign up for Pop Pay. Pop Entry is a device planned to be used outside of buildings so people can use their faces to access the building that they live in.

“Right now we’re on five campuses, San Diego State, University of Santa Barbara, Chapman, Pasadena City College, and the fifth being USC (University of Southern California),” Costello said. “For our product to be truly adopted, we need to be in the place that students want to go, so location is a huge factor.”

Costello said the way Pop Pay will benefit students is to make it safer for them to pay.

“It happens all the time, credit card fraud is huge amongst phishing scams,” Costello said.

Phishing is a scam that targets banking consumers through emails from a well-known source.

“I can simply just find your debit card on the ground and run up a tab, I can’t do that with face ID,” Costello said.

The company said it wants students to easily and quickly pay for food and drinks without the hassle of going through your backpack to find your wallet.

Costello said Pop ID has been doing very aggressive marketing strategies and doing extreme discounts this past week. At Coffee ‘N’ Talk near the SDSU campus, if a customer buys something for $7 or more, they get $7 off with Pop Pay. This discount ended on Monday, Oct. 25.

Costello said the way the company makes money is by collecting a small transaction fee from each Pop Pay user.

“We monetize by charging businesses 1.5 percent plus 11 cents for every transaction that goes to our ecosystem,” Costello said.

Alex Shean — who started volunteer work at Pop ID in the summer — said Pop Pay is very convenient for students.

“If it’s late at night, and you want to go get some food, you just scan your face and don’t need your wallet,” Shean said.

Shean is also a sophomore business marketing major at SDSU and said he wants to convert to business management. Volunteering at Pop ID has influenced him to switch majors.

“I’ve seen the way Tom (Tom Costello) manages stuff and I feel I was so suited to do that and I could always dive into that because I have a passion in marketing,” Shean said.

The Pop Entry device is in several fraternity and sorority buildings around the college area. Pop ID has been targeting Greek Life to promote their product.

Shean is a part of the Pi Kappa Alpha fraternity and they use Pop Entry to access their building. He said the fraternity would always have items stolen from the house and now with Pop Entry he feels less worried.

“Pop Entry is a more safe and secure way to get into your house and you have to scan your face to get in,” Shean said. “I would never have people doing that (stealing) again and we have exactly the only people we trust in there.”

Costello said he hopes that 10 years in the future — with the Pop id account — people will use it to access basically anything.

“Hopefully, you can use that same account to pay at your house without any keys, to get into a Padres game, your medical records on your face, pharmaceutical products on your face,” Costello said. “It’s a single digital identity so that you never need anything else to prove that you’re you, other than your face.”