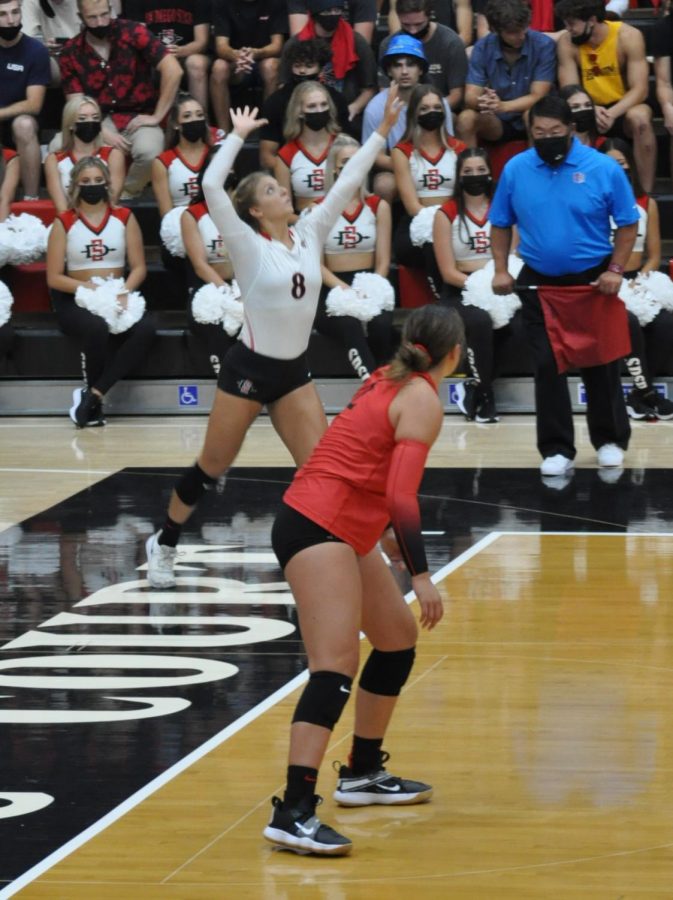 Senior Natalie Smith sets up for a serve during the SDSU/USD Invitational.

The last matchup between the Aztecs and the Aggies (17-6, 9-2 MWC) resulted in a 3-0 sweep for USU, and the Scarlet and Black came close but missed scoring key points to get the win.

“We felt like if we play well, we have a chance to win every match,” head coach Brent Hilliard said. “We’ve proven that so many times this year, whether we lose in five or win some matches we aren’t expecting to, so we know we can win it’s just a matter of winning the really meaningful points. And that’s what we missed out on tonight. We had a lot of points that had a lot of leverage on them and we didn’t have as much success as they did.”

The first set went the way of the Aggies, with SDSU posting eight errors — including five service errors — to give USU the advantage. Senior outside hitter Victoria O’Sullivan attempted to bring the Aztecs back with four straight kills to hold the Aggies at set point, but USU took it in the end.

O’Sullivan’s reliable hitting late in the set came from her switching back to the outside hitter position, instead of the opposite hitter role she has been playing throughout the season.

“I’m back on the outside now, which is the position I used to play but I haven’t played this season, so it’s kind of a little bit of a switch,” O’Sullivan said. “But I’m a lot more comfortable out there so just telling (the team) I’m comfortable hitting the ball so they can rely on me is what got us through that.”

SDSU switched the momentum completely in the next two sets, taking commanding leads. Set two saw the Aztecs go on a 9-1 run to push them to an 18-10 lead, capitalizing off the nine errors in the set by USU. Set three featured the Aztecs taking a 22-14 lead, as well as more players contributing to the offense.

Spreading the wealth of points is critical for the team’s offense.

“We emphasize mixing the ball around and our passing really came out for us to get the middles involved in those two sets, and that was really good,” O’Sullivan said. “Once our passing gets down, it opens up a lot for a team.”

But USU responded to the Aztecs’ dominant performance by reversing the momentum again. Grabbing a quick 10-4 lead off of a slew of Aztec errors, the Aggies forced the match to a set five.

The fifth set featured 12 ties and six lead changes, and the Aztecs managed to make it to match point off an Aggie attack error and kills by freshman setter Kennedy Feuerborn and O’Sullivan. USU came back to tie it at 15-15, with the game ending off two untimely errors by the Scarlet and Black to give the Aggies the win.

Hilliard said the lack of experience in playing with each other has been a recurring problem for the team to finish out matches.

“That’s the problem we’ve run into quite a bit this year. The chemistry, which has a lot of influence in the fifth game, is just not where it needs to be,” Hilliard said. “The trust factor, the reliance on each other, to be able to do those skill sets well, we still haven’t quite gotten that down even though we’ve had a big piece of the season to work it out. But that’s to be expected, to some extent, because most of our players have never played together.”

O’Sullivan said being able to take close games against the best teams in the conference helps the team look ahead to the future.

“It definitely gives us confidence because these are top teams and they’re pretty good,” O’Sullivan said. “But knowing that we are neck-and-neck with the top teams in the conference is a good feeling going forward.”