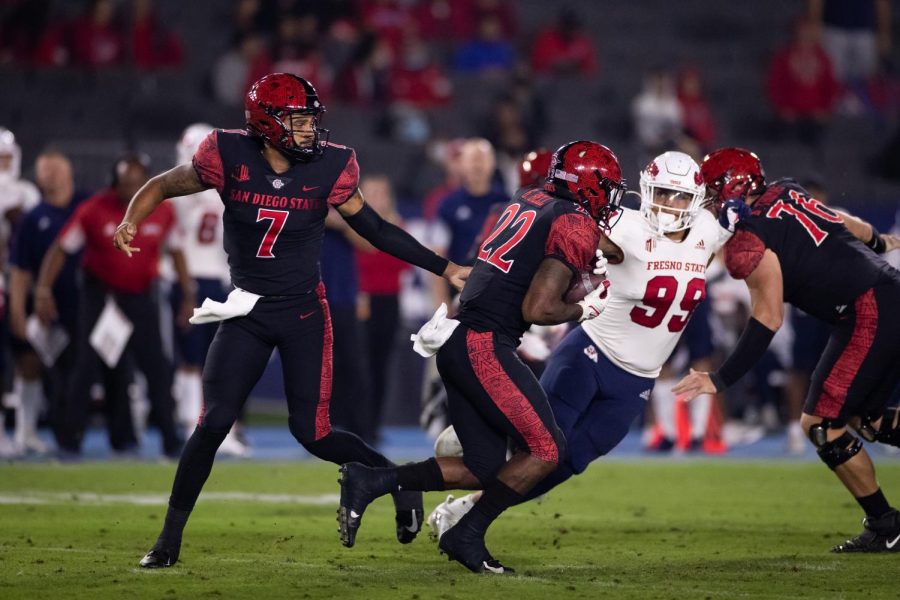 Instead, the Bulldogs employed a scorched earth policy on the Aztec secondary as senior Jake Haener torched the Aztecs, going  25-of-42 passing for 301 yards and a touchdown en route to a 30-20 defeat for the Aztecs.

Head coach Brady Hoke acknowledged the plethora of errors made by his squad and that they had to get better.

“In the first half, we did not play very good football. Defensively, though we got better. Fresno was nine of 18 on third downs. That’s 50 percent; we cannot have that happen,” Hoke said. “We have to do a lot of things better as coaches. First and foremost, of getting a football team ready and we have a lot of work to do. This one hurts. I told the team if it does not hurt, they should leave the program.”

Senior quarterback Lucas Johnson — in his second straight start — did his best to match blows with Haener, going 14-of-31 with 220 passing yards and a touchdown.

In this shootout, Johnson needed all of his shots to find their mark. Unfortunately, for both him and the Aztecs, the senior misfired on more than one occasion and turned the ball over three times: twice via interception and once on a fumbled snap.

“We knew we had to lean on each other if we were going to chip away at the lead,” Johnson sullenly said after the game. “We got some momentum going but then I put the ball on the ground. It falls on my shoulders and I can’t let that happen.”

After trading punts, FSU went to work carving up SDSU’s zone defense like a pumpkin. An 18 play, 86-yard drive chewed up nearly seven minutes of clock and ended with a 13-yard touchdown run from senior running back Jordan Mims.

SDSU tried to push back on their next drive, with Johnson completing a 39-yard pass to senior wide receiver Elijah Kothe to push SDSU into FSU territory. However, a poor throw intended for senior BJ Busbee was picked off by junior defensive back Evan Williams.

After stalling out on yet another drive, junior punter/kicker Matt Araiza pinned the Bulldogs on their own eight-yard line.

But Haener winded up and fired a deep bomb to sophomore Josh Kelly for a 69-yard completion to flip the field for the Bulldogs, eventually leading to a 49-yard field goal by senior kicker Cesar Silva to push the FSU lead to 17-0.

After another field goal increased the Bulldogs’ lead to 20, Johnson led the Aztecs on their first scoring drive. Two impressive catches by Kothe, a short pass to senior tight end Daniel Bellinger and a 14-yard scramble set the Aztecs up inside the red zone. Johnson’s ensuing 19-yard pass to junior Tyrell Shavers put SDSU on the board for the first time.

It was a good day for SDSU receivers as nine different Aztecs logged at least one catch. Each of Kothe’s four catches was a marvelous athletic play while Shaver and senior receiver Jesse Matthews had just two catches each but gained chunks of yardage.

“We got a lot of guys who can do different things,” Hoke said. “I think Jesse is a little bit different than Elijah. You got some different guys. I think Tyrell has done a really nice job fitting in with the group and I think Shaw is another guy who is playing good football.”

However, SDSU’s mistakes cost them dearly. While Mims bulldozed past one of the best rushing defenses in the country, their secondary was consistently gashed for deep plays.

Meanwhile, FSU converted nine of 18 third downs and scored on each of the three SDSU turnovers. With long drive after long drive, the Bulldogs dominated time of possessions to keep the Aztec offense off the field and the exhausted defense on the field.

The mental mistakes didn’t just come from the players. With 38 seconds remaining in the second quarter, Johnson completed a 20-yard pass to Busbee who couldn’t get out of bounds. Johnson was able to scramble out of bounds to stop the clock only for Hoke to call a timeout after the play with 18 seconds on the board.

The mismanagement of the clock set up a 55-yard field goal attempt from Araiza, whose kick sailed far to the right.

In the fourth quarter with the Aztecs down 10 and facing a fourth and three on the FSU 43, Hoke chose to punt the ball away instead of going for it. FSU proceeded to eat five minutes of clock that SDSU really couldn’t afford to lose.

With three timeouts and the opportunity to pin the Bulldogs deep in their own territory, Hoke chose the safe play instead of the aggressive gamble.

Johnson’s struggles eventually led to not senior quarterback Jordon Brookshire, but freshman Will Haskell getting playing time in ‘garbage time’. Haskell performed as well as he could, completing three passes on six attempts for 27 yards and ran for the first rushing touchdown of his career.

A successful onside kick was overturned after review and FSU ran out the rest of the clock to take home the Old Oil Can.

SDSU will look to get back on track on Nov. 6 against Hawaii.