88th annual homecoming court announced, themed “Together as One” 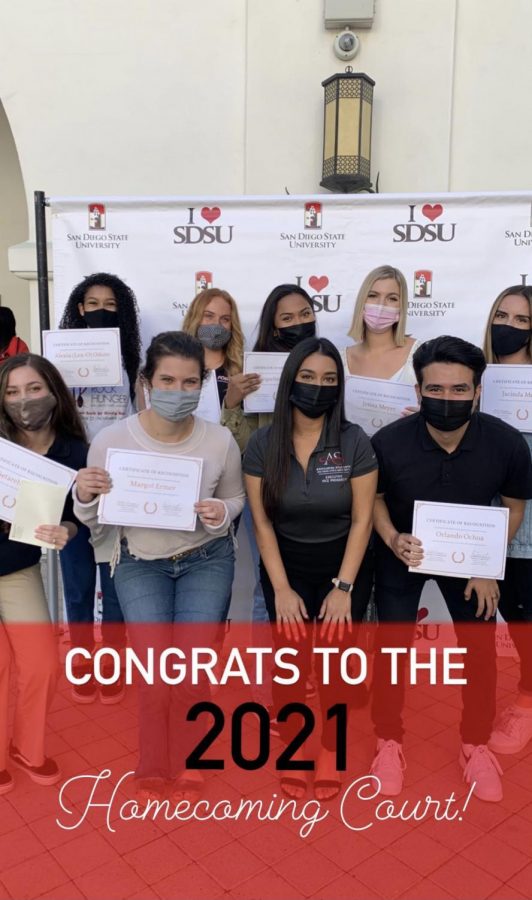 This year's homecoming court theme was "Together as One."

On Nov. 12 and 13, San Diego State Aztecs will be celebrating the university’s 88th homecoming celebration. This year’s homecoming celebration will be the first in-person one since 2019, due to the COVID-19 pandemic. To celebrate this return to normalcy, the Homecoming Steering Committee chose the theme of “Together as One.”

The Homecoming Court consists of ten SDSU students who are active members of an SDSU recognized student organization or hold a leadership role on campus. Nominees must also have completed 60 units by the time of nomination, and must be in good academic and disciplinary standing.

Interested students had to apply online via a comprehensive application. These applications were then reviewed by a team of faculty, staff, and alumni to choose ten distinguished students to serve as this year’s homecoming court.

According to the official San Diego State University Homecoming website, the purpose of homecoming court is to “honor those exceptional students who have shown their dedication through extraordinary commitment to leaving a legacy of pride.”

On Oct. 27 a crowd of students, including the Aztec Marching Band and the Aztec Cheerleaders, gathered in the Conrad Prebys Aztec Student Union to hear the announcement of this year’s homecoming court.

Integrated communications and marketing fourth year Jacquelin Banal, is involved in Kappa Delta and acts as the communications director of the Mortarboard honor society.

Banal stressed the connection between her status as a transfer student and being nominated to the homecoming court.

“As a transfer student, I think it’s important for me to represent that population and show that transfer students are doing amazing things on campus,” Banal said. “A lot of the time, students taking a non traditional college route are kind of stigmatized.”

Speech and language science third year, Alexia Oduro, is the Associated Students “Student at Large.”  She described her nomination as a celebration for her community.

“My nomination is important to me to uplift the communities that I’m a part of,” Oduro said. “I take being nominated not about me, but about my community and the work we have done together. I think it is awesome that I have the opportunity to support my communities in such a capacity.”

In recent years, SDSU has transitioned from nominating a king and a queen to instead nominating two royals in order to make the homecoming court tradition more inclusionary to those who do not identify within the binary genders.

The two selected royals will be crowned at the Nov. 13 football game, and will also receive special recognition on campus.